The radical Shi’ite leader, whose group is often viewed as an Iranian proxy in Lebanon, said he doubted Israel would attack, but warned that if it did, Iranian officials have told him that “the retaliation will be huge.”

“Iran will not forgive a strike against its nuclear facilities,” Nasrallah said in an interview with the Beirut-based, pan-Arabist satellite channel Al-Mayadeen. “The Zionist entity will not be the only target. American bases in the region will be targets, too.”

Iran would target the U.S. “wherever” possible, he said, because Israel does not act independently of the U.S. and America would be held responsible for Israel’s actions.

Speculation continues to grow that Israel may attack Iranian facilities in a bid to retard what many Western governments suspect is an attempt to lay the groundwork for a nuclear weapons capability under the cover of a civilian program.

Nasrallah has been relatively subdued for months while his other close ally, the Syrian regime, confronts the biggest challenge of the Assad era. Mideast analysts generally agree that the fall of President Bashar Assad would deal a severe blow to both Iran and Hezbollah—although what will take its place remains an unknown, and a source of concern in the West.

Hezbollah has itself been implicated in some of the deadliest terrorism directed at the U.S. in history—suicide bombing attacks at the U.S. Embassy and U.S. Marine barracks in Beirut in 1983 that killed more than 300 people, most of them Americans.

According to excerpts of Monday’s interview released by Hezbollah’s al-Manar television channel, Nasrallah did not directly threaten to attack U.S. targets himself, although he did warn Israel that Hezbollah and its ever more sophisticated missile arsenal was ready to deal a severe blow to the Jewish state, capable of hitting targets anywhere in “occupied Palestine.”

Nasrallah denied that his militia possesses chemical weapons, saying it had no need of them and also opposes their use, for religious reasons. Western governments have voiced concern in recent months over the safety of Assad’s admitted arsenal of chemical weapons, and there has been some speculation Syria may have made some available to its ally in Lebanon.

In its latest safeguards report on Iran, the IAEA said the number of centrifuges at a uranium-enrichment plant at the underground Fordow facility near Qom has doubled in number. It also reported that satellite imagery shows that “extensive activities” have been taking place at a military site where Iran is suspected of carrying out explosive tests that may have nuclear warhead applications. The IAEA has been asking since early this year to inspect the site at Parchin, near Tehran, but has so far been refused permission.

The signs of activity at the site since that request was made suggest attempts to clean it up and cover tracks. The report cites signs of “liquid run-off,” ground-scraping, and the removal and demolition of structures and buildings.

“In light of these extensive activities, the Agency’s ability to verify the information on which its concerns are based has been adversely affected and, when the Agency gains access to the location, its ability to conduct effective verification will have been significantly hampered,” the report stated.

Iran says allegations that it is attempting to sanitize the Parchin site are “baseless.”

According to the IAEA report, Iran’s stockpile of low-enriched uranium (LEU) continues to grow steadily, and now totals 6,876 kilograms—up by 679 kilograms since last May. In its analysis of the IAEA report, the Institute for Science and International Security in Washington said that that total amount of LEU, “if further enriched to weapon grade, is enough to make five nuclear weapons.”

The IAEA's board of governors is in session beginning on September 10, and Iran is expected to feature prominently during the five-day meeting, along with issues relating to Syria and North Korea.

“The [IAEA] report confirms what we have been saying for some time—while the international sanctions are indeed making things difficult for the Iranian economy, they are not delaying the progress of the Iranian nuclear project,” he said during a weekly cabinet meeting. 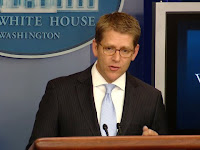 President Obama’s Republican critics have accused him of not being sufficiently supportive of Israel in the face of a belligerent Iran.

But White House press secretary Jay Carney, responding to a reporter’s question Sunday about Netanyahu’s comments, said “there is absolutely no daylight between the United States and Israel when it comes to the necessity of preventing Iran from acquiring a nuclear weapon.”

Carney also characterized Obama’s efforts to unite the world and isolate Iran over its nuclear activities as a success.

“I think it is a testament to the vision that the president had when he ran for the office, that he understood the value in uniting the international community behind a plan of action that has isolated Iran, put enormous financial stress and political pressure on Iran as we pursue this goal of preventing Iran from acquiring a nuclear weapon,” he said.

Carney was speaking two days after Iran wrapped up the biggest international gathering it has hosted since the Islamic revolution, a week-long summit of the 120-member Non-Aligned Movement. Iran has been elected to chair the bloc for the next three years.

In a final communique adopted on Friday night, NAM leaders expressed support for Tehran’s activities “in the field of peaceful use of nuclear technology,” and rejected unilateral sanctions against Iran.

The regime has touted the summit, and its presidency of the NAM, as proof that attempts to isolate it have failed.

“NAM members were seeking to find a flag-bearer in a bid to confront the expansionism of the U.S. and its allies,” Iranian First Vice-President Mohammad Reza Rahimi said in Tehran on Monday. Iran has now been entrusted with that position, he added.