On the Fourth of July, in Geneva, Switzerland, scientists at CERN (The European Organization for Nuclear Research) announced that they think they have finally found traces of the elusive Higgs boson. A boson is a subatomic particle. Peter Higgs is the physicist who proposed the existence of this particular—and apparently important—particle almost 50 years ago.

The scientists at CERN made the discovery with the help of the Large Hadron Collider (LHC). The LHC is the world's largest and highest-energy particle accelerator. It is configured in a large circle almost 17 miles in length. It's buried 500 feet underground, beneath the border between France and Switzerland. It cost more than $10 billion to build. It smashes atomic particles and a beam of light travels the length of the LHC 11,000 times per second. 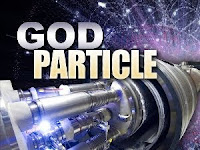 Why is this discovery important? In a nutshell, discovery of traces of what could be the "Higgs boson" indicates that the "Higgs field" may actually exist. It's the "Higgs field" that gives mass to elementary particles. In other words, the Higgs field converts the invisible into the visible and the immaterial into the material. It makes something out of nothing. It, in essence, holds everything together at the molecular level.

Perhaps because of its incredible importance in the creation of matter, the Higgs boson has been given the rather sensational nickname of "The God Particle."

The Bible says that there is an active, binding force that literally holds all the matter of the universe together. It identifies that force as the Word of God. A literal translation of Hebrews 11:3 says,

"By faith we understand that the universe was formed by the (spoken) Word of God, so that what is seen was not made out of things which are visible."

"He is the image of the invisible God, the firstborn of all creation... all things have been created through Him and for Him. He is before all things, and in Him all things hold together."

It's fascinating to me that the Bible accurately described molecular concepts and forces that scientists only began to encounter and understand in the mid-20th century. But then, since the Bible was inspired by the Creator Himself, that should come as no surprise.

Also, I'll discuss another scientific "achievement" that occurred in May, 2010. Scientists in Maryland succeeded in "creating" a synthetic bacterium cell. They also claimed that their creation, nicknamed "Synthia," proved that life could possibly have emerged from the primordial ooze without benefit of a Creator-God. To make that claim, however, they had to overlook some pretty glaring inconsistencies.

Please bring your thinking caps with you when you tune in to this week's program. And if you call yourself a "rational skeptic," I've got a few nuts for you to chew on this week, too.