The Worst President in American History

Have we lost our capacity to think in this culture? Why is this election even close? It should be a runaway blow out by now in favor of Romney. Just look at the President's "record" over the last four years. Keep in mind, this is only an economic record. Obama's record in foreign affairs, sovereignty matters, cultural issues, and corruption is even worse. Our country is falling apart at the seams: 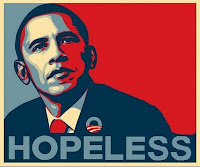 23 million unemployed, 43 straight months of 8+% unemployment (of course, this number does not even factor in real or virtual unemployment or take into account those who have given up looking for work altogether), 45 million on food stamps, black poverty at record highs, black youth unemployment over 50%, Hispanic unemployment at 11.3%, food prices up 15% under Obama, gas prices doubled under Obama, Obama has the worst job creation record since 1945, the Obama "recovery" is the worst in 75 years, median household income declined under Obama, the middle class has lost 40% of its net worth under Obama, average family health insurance up $1,500 under Obama, addition of $6 trillion to our debt...more than all Presidents combined, and Obama presided over the only US credit downgrade.

If socialism works, how come so many Americans are hurting? The Obama campaign slogan "change" has jokingly come to mean what is finally left in our pockets following all of these aforementioned economic problems.

I know, it is all Bush's fault. If that is what you think, keep in mind that the Democrats controlled both the legislative and executive branches of government for two solid years. During that time, they did nothing to help us climb out of our economic problems. In fact, through unprecedented governmental spending and expansion, they made things worse. Remember, it was the Democratic leadership in the House (Nancy Pelosi), and the Senate (Harry Reid), and the Executive branch (Obama and 30 or more unelected Czars) that violated numerous legislative procedures and Constitutional protections to ram an unwanted and unpopular 2700 page bureaucratic monstrosity down our throats known as "Obamacare." This stunt allowed the national government to confiscate one sixth of the private sector economy, and represented the largest Federal power grab since FDR's "New Deal" and LBJ's "Great Society." And contrary to what Chief Justice Roberts and four other like-minded Supreme Court "jurists" may think about it, there is not a single shred of Constitutional authority to justify Obamacare. (I still can't find the words "universal healthcare" in the 20 enumerated powers that the text of the Constitution actually ascribes to Congress.) At what point do these people become accountable for their actions? By perpetually blaming his predecessor, Obama, in effect, is arguing that he is immune from accountability.

Besides, Obama's real problem is not with George Bush. Rather, it is with George Washington. It is America's unique system of limited government that Obama seeks to "fundamentally transform." By the way, America's founding documents have provided more freedom and prosperity to more people than any other system in world history. (Interestingly, our majestic Constitution, including the Bill of Rights, spans a mere 10 pages, which is quite minuscule in comparison to the Obamacare maze). These founding documents need protecting, not transforming.

While on the subject of the Georges, I would be remiss not to mention George Obama, Barack Obama's half brother who lives in Nairobi. As documented by Dinesh D'Souza in his new movie and book, George Obama lives in a hut and languishes in poverty-stricken conditions. Why won't the President of the United States, the most powerful man in the free world, come to the financial rescue of his own kin and blood? Under the socialist mindset, he really does not have to since the role of charity belongs to the state rather than the individual. Such priorities explain why Socialists are some of the stingiest people on the planet. After all, it is VP Joe Biden who gave less than 1.5% of his own personal income to charitable causes in 2011, all while simultaneously and continuously clamoring for higher taxes and greater government size. George Obama has another strike against him, which also helps explain the president's refusal to be his brother's keeper. According to D'Souza, George Obama had the temerity to publish his pro-colonial thoughts, which are obviously sentiments that contradict Barack Obama's well-known anti-colonial, Marxist worldview.

Despite disdaining George Bush, George Washington, and George Obama, there is another "George" whom Obama no doubt loves since Obama will owe him big time should he win this election. That fourth George is international financier and left-wing globalist George Soros.

Who in their right mind can argue against the obvious conclusion that Barack Hussein Obama is the worst President in American history? Well, I know there is at least one person out there who appreciates Obama, and that is Presidential disaster Jimmy Carter. After four years of the Obama Administration, we can safely say that the American public no longer categorizes Jimmy Carter as the single worst President in American history. A vote for Obama is nothing more than a vote for four more years of the same, or worse. Wake up America, before it's too late!