Hezbollah: Our Rockets Can Hit All of Israel

They boast in their capacity for bloodshed and murder, and the world continues to shower opprobrium not upon them, but upon the target of their jihad: Israel. 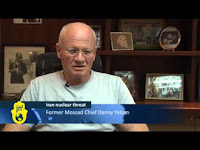 Rockets from Gaza and Lebanon can cover all of Israel

(Algemeiner)—One of Hezbollah’s senior officials and its leader in southern Lebanon is claiming that the Iranian backed terrorist group can hit any Israeli city with its arsenal of missiles.

Speaking in Lebanon on Monday ahead of “Quds Day”, Sheikh Nabil Kaouk said Hezbollah will continue its attempts to free “Palestine”, rid Israel from its presence in Jerusalem, and that the group’s missiles can reach anywhere in Israel.

Former Mossad Director Danny Yatom seemed to confirm part of Kaouk’s statement while offering an analysis of what Iran’s response might be to an Israeli strike against its nuclear facilities.

Rockets from Gaza and Lebanon can “cover all of Israel, and that is the main problem,” Yatom said.

Israel’s short range rocket defense system, the Iron Dome, was reportedly installed in northern Israel last week (Safed) as part of a series of tests being undertaken by the IDF. Walla News quoted an IDF official who said the placement of the system in Safed was not related to any specific security threat but is part of a series of tests being done to determine the appropriate locations for additional Iron Dome batteries.