Egyptian Professor: We Are Stoking the Flames of Conflict

A prominent Egyptian professor of political science admitted on Egyptian TV last week that institutes of higher learning in the region are purposefully stoking the flames of conflict between young Arab Muslims and Israel. 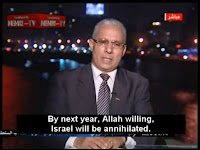 "By next year, Allah willing, Israel will be annihilated”

In an interview with Al-Alam TV that aired on August 17, Professor Gamal Zahran, head of the Department of Political Science at Port Said University, openly acknowledged that promoting hatred of the Jewish state is a primary goal in classes taught by himself and other lecturers.

Providing a glimpse into how Israel is dealt with in Middle East university classrooms, Zahran insisted that "the elimination of the Zionist entity is beyond debate...the only question has to do with the circumstances."

Zahran believes the right set of circumstances may soon exist to take action on his teachings.

"I believe that the [Arab Spring] provided the people with hope that one day Jerusalem and Palestine [sic] will return to them," Zahran stated. "We are constantly keeping that hope alive among the younger generation so that they will realize that the Palestinian cause is an essential one."

And while the Arab masses are not yet ready to storm the "Zionist entity," Zahran was confident that "the hope and memory will later turn into action. By next year, Allah willing, Israel will be annihilated."

The ongoing incitement of future generations of Arabs to continue the conflict with Israel has been Jerusalem's biggest complaint in its various peace processes. Despite being officially at peace since 1979, younger generations of Egyptians still hate Israel, and judging by Zahran's remarks the reason why is clear.

Even worse is the Palestinian Authority, which teaches children from the youngest ages through its schools and state-run media to view Israel and the Jews as blood-thirsty usurpers, thus making a genuine, lasting peace nearly impossible to achieve.