Q. I read your article on Bible Prophecy Blog [also available at SpiritandTruth.org] regarding the mention of sea creatures dying in the Bible.

Hosea 4:2-3 lists the deaths of beasts of the field, birds of the air, and fish of the sea dying as a result of God's warning of pending judgment for cursing, lying and murder, stealing and adultery, and bloodshed. 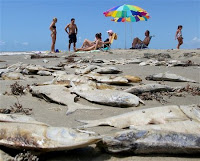 A. The article contained my response to a question as to whether mass sea creature deaths recently in the media might indicate that Biblical passages associated with the Tribulation are possibly in the process of being fulfilled. My response emphasized the need to develop a systematic understanding of Biblical prophecy in order to grasp the larger-scale context within which prophetic passages are anchored in history.

As you point out, there is a passage in Hosea 4 which also mentions fish of the sea being “taken away” as part of God's judgment. But it simply will not do to use the Hosea 4 passage in support of a Biblical significance to sea creature deaths occurring in various parts of the world today. Why? Because, like all Biblical passages, Hosea 4 is given within a specific context. We see this context when we broaden our consideration of the text:

Clearly, Hosea is prophesying a time of famine due to God's judgment—but not just anywhere in the world—specifically related to His chosen people: Israel. Thus, sea creature deaths outside the land of Israel would not be in view in this particular passage.

In a similar passage in Zephaniah (Zep. 1:3) the context is “the day of the Lord” (Zep. 1:7,14). Even so, the passage is primarily relating conditions pertaining to the land of Israel: mention is made of the “Fish Gate” (Zep. 1:10) and “Jerusalem” (Zep. 1:12). Even though events in the day of the Lord extend beyond Israel to take in a global scope, from many other passages we know that the day of the Lord is not presently underway so sea creature deaths occurring in our time cannot be in view in the Zephaniah passage.

Another passage which mentions “the fish of the sea” quaking at God's presence (Eze. 38:20) is also explicitly connected with activities in Israel:

In this case, the possible affect upon sea creatures only occurs when Gog invades Israel—which is obviously not underway today.

The problem we run into when we uncritically pull out individual verses and fragments of verses and attempt to use them to explain events today is that invariably the context of the immediate passage (or the broader prophetic framework established through a systematic study of related passages) is overlooked. This is “proof texting” at its worst: a technique more commonly associated with the manipulative teaching of cult leaders than sound Biblical interpretation.

The context of a given prophetic passage is an important anchor which prevents the passage from being hijacked and applied willy-nilly to unrelated events. It is my belief that God specifically gives us these contextual clues to protect us from unsound application of various passages to events and situations for which they were never intended. It requires greater care and effort to approach the Scriptures with an eye to the overall context, but we really have no choice if we are to avoid deception and provide a steady witness of God in the volatile times within which we may find ourselves living.

One thing we know for sure: God is not the author of confusion [instability, disorder] (1 Cor. 14:33). Therefore, those who are led of His Spirit should exhibit a sound, stable understanding of the truths within the Bible—rather than confusing claims of correlation with dubious connections which can only serve to undermine the witness of Christianity and Christ Himself before a skeptical world.