Today I had the opportunity to view the non-fiction movie "Obama 2016" produced by Dinesh D'Souza, one of the brightest minds in the conservative movement. D'Souza's Indian ethnic background effectively insulates him from the tired charge of racism typically thrown at any of Obama's detractors and critics. In this extremely well-documented movie, D'Souza sets forth the thesis that Obama is largely motivated by an anti-colonial, Marxist ideology. This thesis offers the most comprehensive interpretation towards explaining Obama's seeming inexplicable actions as President of United States over the past four years. 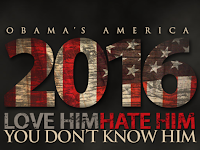 Obama's actions, such as returning Winston Churchill's bust, banning offshore American drilling while simultaneously promoting it in Brazil, unprecedented deficit spending, pursuing an aggressively anti-Israel and pro-Muslim foreign policy, and having his executive representative to the space program exaggerate Islam's contribution to science, can all be understood through D'Souza's anti-colonial, Marxist prism.

D'Souza brilliantly explains the various cultural, educational, religious, personal, and family forces that have shaped the ideological framework of the man that currently occupies the oval office.

Please watch this movie in order to comprehend why Obama's values are far outside of the main stream of the typical American, and why the country that we love may not ever be the same if this man is given an additional four years in office.