The fighting in Damascus and now Aleppo means Syrian dictator Bashar Assad can no longer hope to reclaim his country. The best he can hope for is to barricade himself inside a stronghold in the mountainous areas of the northwest and along the Mediterranean Coast.

An army defector says that 60% of the country is now under the control of the rebels called the Free Syria Army. They have captured all four border crossings on the Iraqi border and one on the Turkish border. The fighting in the capital of Damascus is nearing the Presidential Palace and it is escalating in Aleppo, the upscale city that has been one of the few areas relatively stable since the revolution began.

"Aleppo is to Syria what New York City is to the U.S.—a key financial hub, and a key crossroads for international trade," writes James Miller. His assessment is that, “If Aleppo falls, this war is over,” because the rebels will then control Idlib Province and then take Hama and Homs. 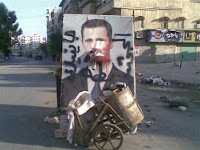 The Fall of the Syrian Regime

Assad’s forces are over-stretched and over-used. Their offensives are able to defeat the rebels in battles—Damascus’ Midan District has been recaptured by the regime—but then the fight moves elsewhere. The regime simply doesn’t have the means to squash the revolution.

The military looks strong on paper with about 550,000 soldiers in total but three-fourths were confined to their barracks in order to prevent defections in February. Two-thirds of the reservists didn’t show up for duty. That was six months ago. The rebels estimate that about 50,000 of 280,000 deployed troops have defected and the regime loyalists suffer from “rampant mismanagement in the command structure.” In 2007, defense expert Anthony Cordesman stated, "Syria’s conventional forces are the impoverished stepchild of the region." There’s no evidence they’ve been significantly upgraded in the subsequent five years.

The regime is suffering a high loss rate while rebel strength is increasing. About 150 of the regime’s troops are killed and wounded every single day. The rebels are getting new shipments of ammunition, machine guns and rocket-propelled grenades and the pace of defections to their side is increasing. The most significant defection is that of Brigadier-General Manaf Tlas, a childhood friend of Assad that served in the elite Republican Guards. He is from the second-most famous Sunni family in the country and his father was part of Hafez Assad’s innermost circle.

The rebels easily have the upper hand in morale and momentum. Operation Damascus Volcano has exceeded the rebels’ expectations. The bombing of a secret meeting that killed four top regime officials, including the Defense Minister and Assef Shawkat, one of the most hated regime insiders, shook the government to its core. The fighting in Aleppo is increasing rebel morale exponentially.

Another reason that Assad cannot defeat the rebels is that Iran and Hezbollah cannot make up for the foreign aid given to the rebels by Turkey, Qatar, Saudi Arabia, the U.S. and others. The Iranian regime is financially strapped due to the European oil embargo and had to cut its funding to Hezbollah by 40% in 2010, long before these latest sanctions were even agreed upon. The U.S. has convinced Iraq to stop flights to Syria from Iran which were delivering assistance and has had some success in blocking Iranian ships transiting the Suez Canal.

While it is true that Russia is assisting Assad, it is uncertain how far the Russians are willing to go. Russia cancelled its $100 million sale of the S-300 air defense system to Syria following a meeting with the Israeli Prime Minister and is now saying that Assad needs a way to leave the country in a “civilized” way.

Even if Assad were to launch a successful counter-attack that pushed the rebels back, he wouldn’t be able to eliminate them because of Turkey’s protection. Following Syria’s downing of a Turkish jet, the Turks changed their rules of engagement to consider any Syrian military asset approaching the border to be a threat that can be fired upon. Turkey just sent more anti-aircraft missiles to the border, and Syrian helicopters aren’t coming within three miles of the border. This means that Turkey has essentially created a no-go zone for the rebels that they can retreat to if necessary.

The regime has, for the first time, admitted that it possesses chemical weapons, and we know it’s a frightening amount. It says it will only use them against a foreign intervening enemy, but it’s not hard to image them being used against the rebels and the regime arguing that outside support for the rebels qualified as foreign intervention. Or it can just claim that their stocks were looted and used by terrorists. Blaming civilian casualties on the rebels is what the regime does anyway. At any rate, orders to use chemical weapons would create irresistible political pressure for an international coalition to immediately intervene and finish Assad off.

Finally, demographics make it impossible for Assad to come back to his glory days as dictator of Syria. The Allawite minority that his regime comes from represents only about 10-13% of the entire population, and it is probable that a significant amount of Allawites have turned against Assad. The Sunnis, which make up 60-74% of the population (estimates vary widely), are entirely and actively against the regime.

The Kurds, about 10%, appear to be mostly on the sidelines but will not lift a finger to help Assad. The Christians, another 10% (but again, estimates vary), mostly feel safer under an Assad regime because of what happened to the Iraqi Christians after Saddam Hussein fell, but they are not actively supporting him. The same goes for the Druze, which make up about 3%.

Assad has reportedly already fled to his Presidential Palace in the coastal city of Latakia. His likely game plan is to turn the northwestern and coastal areas of Syria, called the Allawite Mountains, into a mini-state. This territory would include Latakia and Tartous, a port city with a Russian naval base that can be used to bring in supplies.

The rebels dismiss the possibility of permitting this but storming these Allawite areas is a much more daunting task than taking Damascus or even Aleppo. The Allawites believe they’ll be slaughtered if the regime collapses. The pro-regime Allawite militia, called the Shabbiha, shocks the world with its animal-like viciousness. Imagine what the Shabbiha madmen will do if they believe it is their last stand and only chance at survival. The rebels could agree to a ceasefire and leave the Allawites to their own vices rather than start a bloodbath just to “free” a population that wants to remain under the regime.

A post-Assad Syria is on its way.