Where Is the Ark of the Covenant?

Has the ark of the covenant been Discovered?

The end of the Old Testament period brought a different world to the Jewish people than what they had been used to experiencing. Not the least of these changes involved the loss of their independence and the destruction of their Temple. As we begin our consideration of the Messianic promise during the time between the testaments, it is good to pause and attempt to answer a question that I am often asked—the whereabouts of the Ark of the Covenant. The problem is that the Bible is silent about what happened to it before or after the destruction of the Temple in 586 B.C. While the issue is not directly related to the subject of the Messiah, it will serve to introduce the next period that will concern us—the Intertestamental age and how the Messianic idea underwent change and even caused some of that change!

The Ark of the Covenant was the central furnishing both in the Tabernacle and also later in the Temple of Solomon. It was a chest made of acacia wood covered by gold, 3 3/4 feet in length and 2 1/4 feet wide and high. Within were the two tables of the Law. It was from above this Ark, between the cherubim attached to the mercy seat resting upon the Ark, that Yahweh communed with Israel (cf. Ex. 25:22).

In the 1980's, reports surfaced that an American group had discovered the Ark of the Covenant on Mount Nebo in Jordan. Although no reliable pictures of the Ark were released and no qualified archaeologists ever confirmed the discovery, the rumor spread quickly and caused many to wonder and ask questions. There are also reports that rabbis have "seen" the ark under the Temple Mount. The attitude of any sensible person ought to be that until solid evidence of the Ark's discovery is revealed and confirmed by competent authorities, a skeptical opinion must be held. The reason for this is evident when some basic historical and biblical facts about the Ark are understood. 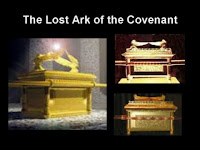 The Bible simply does not reveal what happened to the Ark when the Solomonic Temple was destroyed in 586 B.C. Although it may have been carried off to Babylon as a trophy of war, there is no mention of its being among the confiscated Temple items in 2 Kings 25. The explanation offered in the movie, Raiders of the Lost Ark, is that it was carried off by the Egyptian Pharaoh Shishak when he plundered the "treasures" of the Temple in 925 B.C. (1 Ki. 14:25-26). It is not clear at all, however, that the Ark was among those "treasures." As a matter of fact, the Bible teaches that the ark was still in Jerusalem during the time of Josiah, three hundred years after the attack by Shishak (2 Chron. 35:3). So we know that it did not disappear into Egypt at that time. This is particularly important in light of the Ethiopian Orthodox Church claim to have the ark in an underground temple in Northern Ethiopia. The Biblical statement cited above contradicts any idea that the ark was carried away to Africa in the tenth century B.C. as the Ethiopians claim. Further complicating this claim is the fact that no outsider has ever seen this ark in Ethiopia. How then can such a claim ever possibly be substantiated?

An apocryphal book written during the century prior to Jesus' birth records an interesting idea about the fate of the Ark. 2 Maccabees 2:4-7 reads:

"It was also in the writing that the prophet [Jeremiah], in obedience to a revelation, gave orders that the tent and the ark should accompany him, and that he went up and beheld God's inheritance. And Jeremiah came and found a cave-dwelling, and he took the tent and the ark and the incense altar into it, and he blocked up the door. And some of those who followed him came up to mark the road, and they could not find it. But when Jeremiah found it out, he blamed them and said, "The place shall be unknown until God gathers the congregation of his people together and shows his mercy."

It is this reference that some ark-hunters used in their "discovery" of the Ark on Mount Nebo in Jordan. The following should be kept in mind, however, concerning this passage. While scholars acknowledge that 1 Maccabees is a very reliable source of historical information, 2 Maccabees is marred by many legendary and miraculous tales recorded nowhere else. For example, it is in 2 Maccabees 12:43-46 where the offering of prayers and sacrifices for the dead is mentioned, a practice which is nowhere mentioned in the canonical Scriptures. It is highly doubtful, therefore, that Jeremiah did what the above account declares he did. There is no such reference to Jeremiah's action in either Kings, Chronicles or in his very autobiographical prophetic book that goes by his name. Again we must ask, "Why did not the Scriptures record this very important deed if it really happened?"

Furthermore, if we are going to consider information from non-scriptural sources, why not accept the following simple statement in an apocryphal work from the first century? In 4 Esdras 10:22, the Jewish author bemoans the idea that, among other tragedies befalling his people, "the ark of our covenant has been plundered."

A Jewish tradition exists that the Ark had been buried under the "Chamber of Wood" in the Temple prior to the Babylonian destruction in 586 BC. We should note, however, that this tradition appeared hundreds of years later than the destruction of the Temple. Furthermore, the rabbi that mentioned this tradition was opposed by other rabbis in the Talmudic discussion on this subject in Yoma 53b. The fact that this discussion took place in approximately 160 A.D. and that such an act of burying was not recorded either in the Bible or in previous apocryphal books makes this tradition questionable. This does not prevent, however, some orthodox rabbis in Jerusalem today from believing that the Ark is still underneath the Temple Mount and will be recovered someday by archaeologists or Jewish religious leaders. It is often overlooked, however, that the subterranean sections of the Temple Mount have been dug up or explored a number of times since 586 B.C. People like Herod the Great (37-4 B.C.), the Moslem conquerors (640 A.D. ff.), the Crusaders (1199 AD ff.), the Turks (1540 AD ff.), and the British explorer Charles Warren (1850-70) dug up or explored all the subterranean regions of the Temple Mount and no one claimed to have found the ark. It is often forgotten that Warren was a dedicated Free Mason who was actually searching for the ark! Rabbinic "reports" about a so-called ark-sighting after the '67 War are purely apocryphal and have no independent confirmation or photographs. While the remote possibility still exists that it is in a hidden chamber under the mount, only time will tell and skepticism about its presence there is highly advisable.

Modern ark-hunters often defend their efforts by saying that the discovery of the Ark is necessary for the rebuilding of the Temple. They forget, however, an important established fact of history. It was not necessary for the Ark to be present in either Zerubbabel's Temple or in the later, greatly enlarged Temple of Herod. Josephus records that when Pompey entered the Temple in 63 B.C., he did not find the Ark in the Holy of Holies (Antiquities XIV, IV, 4). Furthermore, it was acknowledged by later rabbis that after the Ark had been taken away by the Babylonians, the only thing that remained in the Holy of Holies was a "foundation stone." On this stone the high priest sprinkled the blood on the Day of Atonement that he formerly sprinkled on the Ark during the days of the first Temple (Mishna Yoma 5:2-3). The point to be noticed is that although the ark was not present in the Second Temple, its absence did not prevent the Temple from being very active during that time.

Although the discovery of the Ark would be an astounding event, its discovery is not necessary for the rebuilding of the Temple prophesied in Daniel 9:26-27; Matthew 24:15; 2 Thessalonians 2:4; and Revelation 11:1-2.

An amazing prophetic statement by Jeremiah should be carefully noted:

"And when you have multiplied and increased in the land, in those days, declares the LORD, they shall no more say, 'The ark of the covenant of the LORD.' It shall not come to mind or be remembered or missed; it shall not be made again" (Jer. 3:16).

Jeremiah is prophesying of the future millennial restoration of Israel. He clearly states the lack of necessity for an Ark during this time of future blessing. Moreover, it is highly significant to note that Ezekiel 40-44 describes the millennial Temple and makes no mention of the Ark, although many other details of its gates, chambers, furniture, and ritual are given.

All of the above information should cause each of us to be very careful in evaluating any stories about the supposed discovery of the Ark of the Covenant. Let us labor to study what God has clearly revealed, and not get caught up with extra-biblical ideas and teachings. We have enough in God's Word to keep us busy—let's not get sidetracked by sensational "arkaeology"!

"The secret things belong to the LORD our God, but the things that are revealed belong to us and to our children forever, that we may do all the words of this law" (Deut. 29:29).