Actually, the Islamic world already does have a nuclear bomb—up to 110 of them, in fact—in the form of Pakistan. The difference is that Pakistan's government—while certainly a duplicitous accessory to jihad—is, unlike Iran, currently not run by theocratic, apocalyptic madmen. Of course, that could change at a moment's notice if and when Pakistan's teetering regime is overthrown by the Taliban and/or other assorted Islamic jihadists. But for now, at least, it's much more likely that if Pakistan uses one of its nukes, it will be to the East, against its arch-rival, India. Iran, on the other hand, clearly has its sights set on the United States, Europe and Israel, as its leaders have never ceased to remind us over the past 33 years. 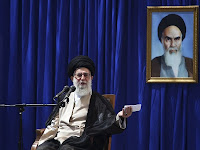 "Nuclear Bomb Is Our Right"

That's what makes the latest scoop by my friend Reza Kahlili so important. Reza reports that state-run Iranian media outlets published a revealing commentary over the weekend written by an analyst and strategy specialist who works in the camp of Iranian Supreme Leader Ali Khamenei. Clearly, the piece would not have been published without the blessing of Khamenei's team. Which means Western leaders had better start paying attention. Here's more, from Kahlili:

Official Iranian media outlets published a commentary Sunday titled “The necessity for the Islamic world to have the atomic bomb,” laying the groundwork for Iran’s refusal to accept limits on its illicit nuclear program.

The essay’s author, Alireza Forghani, is the former governor of southern Iran’s Kish Province and an analyst and a strategy specialist in the camp of the supreme leader, Ayatollah Ali Khamenei.

“The fatwa from Imam Khomeini [the founder of Iran's Islamic revolution] said ‘all Islamic countries have Islamic blood,’” Forghani wrote. “Therefore the Islamic world should rise up and shout that a nuclear bomb is our right, and disrupt the dreams of America and Israel.”

“Having a nuclear bomb is our right,” he argued. “Israel would have been destroyed completely 30 years ago” but has survived because it has nuclear weapons.

In February, Forghani laid out the legal case for the annihilation of Israel and all Jewish people. That treatise, which ran in all the Iranian regime’s media outlets, openly called for a pre-emptive strike on Israel.

Among the state-run media carrying Forghani’s new piece—which argues that Iran should have an atomic bomb—is the major outlet Fars News Agency, which is run by the Revolutionary Guards and thus represents the views of the Islamic regime.

“The Islamic republic, after the victory of the 1979 revolution, faced a hard reality of its enemies trying to overthrow the only true Islamic republic in the world,” he wrote. “The enemies of the Islamic republic of Iran, headed by America with cooperation by its European allies and some in Asia—[and] using the tools such as the United Nations, other international organizations and NATO—have continuously pursued their goal of overthrowing the ... government.”

America is the main enemy of Iran, Forghani argued, and is the only country that has used the atomic bomb and brags about its nuclear arsenal, creating fear in nations that might want to challenge it.

Read it all. Yes folks, in case you haven't noticed by now, America is the Iranian regime's main enemy and ultimate target. They are telegraphing their intentions towards us and are very close to acquiring nuclear weapons that will make their apocalyptic visions a reality. Yet our leaders remain paralyzed, impotent and unable to act. By the way, this isn't the first time a member of Iran's regime has openly pined for nuclear bombs—and mused about using them.