‘Drachmageddon’ Averted… But No Surprise

Despite the apocalyptic tone used by the mainstream media over the weekend, Greece made it clear through the ballot box that they desired to stay within the Eurozone. Of course, the media just can’t get enough of the drama despite the turnout. Now they are fixated on the slim margins of the vote and will likely turn their bright spotlight upon Spain: another major problem child within the Eurozone.

Those who have been following our work for some time know that we do not believe that the Euro will disintegrate. Instead, we expect the media to eventually become tired of the Eurozone and to turn their attention to the United States. The bankrupt U.S. has been enjoying the global fixation upon Europe. The chart below shows the real story. 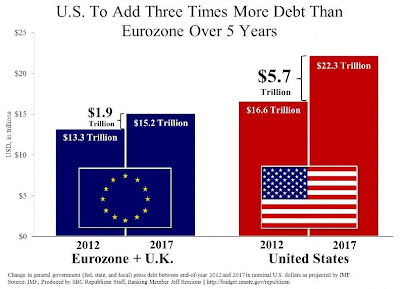 Over the next five years, U.S. government debt levels are projected to increase by an astounding $5.7 trillion. That is three times as much as the $1.9 trillion debt projections from the entire Eurozone and the United Kingdom combined during that same time period.

At the time the report was conducted, the total U.S. debt stood at $15.2 trillion compared to Europe’s $13.3 trillion.

Finally, consider that America’s federal debt is larger on a per capita basis than Europe’s as the U.S. total population is 313 million vs. 332 million in the Eurozone.