New evidence indicates Iran’s supreme leader, Ayatollah Ali Khamenei, wants nuclear weapons and he created a religious-based ruse to deceive the world into joining new talks. The leader intends to use those talks to buy more time to harden his weapons program, prevent an attack, and persuade world powers to lift sanctions.

Six world powers—the U.S., U.K., France, China, Russia and Germany—fell for the ayatollah’s ruse at exploratory talks held in Istanbul, Turkey April 16. Saeed Jalili, the ayatollah’s “personal representative” at the talks, cited the supreme leader’s fatwa—an Islamic order declaring possession of a nuclear weapon to be “a sin”—to deceive the “six” into believing Iran is serious about resolving its disputed nuclear program. The “six” took the bait and new talks begin May 23 in Baghdad.

But the supreme leader seeks nuclear weapons in spite of his false fatwa. A just unveiled 2009 internal International Atomic Energy Agency (IAEA) document summarizes a conversation with then Iran’s president, Ayatollah Khamenei. The ayatollah explained “During a [1984] meeting ...the spiritual leader Iman Khomeini had decided to reactivate the nuclear program.” Khamenei served as president 1981-89 before becoming Iran’s current supreme leader. 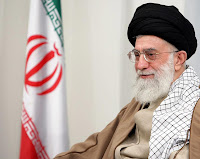 President Khamenei explained “This [possessing nuclear weapons] was the only way to secure the very essence of the Islamic revolution from the schemes of its enemies ... and to prepare it for the emergence of Imam Mehdi [messiah],” who would bring the world under Islamic rule. Khamenei also said “that a nuclear arsenal would serve Iran as a deterrent in the hands of God’s soldiers.”

The ayatollah’s words, other than the false fatwa, and actions support his 1984 view that a nuclear arsenal is needed to “secure...the Islamic revolution.” For example, he frequently affirms Iran will never surrender uranium enrichment, which continues today with 9,000+ centrifuges and more than 12,500 pounds of enriched uranium stockpiled. Iran has enough enriched uranium to make several bombs.

Further, last year Khamenei provided a 1984-like defense against “the schemes of its enemies.” He said it “was a mistake for Col. Muammar el-Qaddafi of Libya to give up his nuclear weapons program.” Then the ayatollah said “Look where we are, and in what position they are now.” Qaddafi surrendered his nuclear program to the U.S. in 2003 and then NATO helped rebels defeat him in 2011.

A 2011 IAEA report claims there is “credible information that Iran is engaged in activities relevant to the development of nuclear explosives,” according to Yukiya Amano, director general of the IAEA. Amano said Iran is engaged in design of weapons, computer modeling, neutron initiators, high explosives, and detonators—all nuclear weapon-related technologies.

These nuclear activities earned international suspicion which led to four sets of UN sanctions and threats of attack from Israel and/or the U.S. That pressure evidently prompted the supreme leader to create a ruse to reverse the mounting pressure.

The ruse came in the form of a tongue-in-cheek fatwa, the ayatollah’s guarantee Iran will never seek to produce nuclear weapons.

Evidently U.S. Secretary of State Hillary Clinton was fooled by the fatwa. She discussed it with “experts and religious scholars” and also with Turkish Prime Minister Recept Tayyip Erdogan. The Turkish leader said, “I have shared the leader’s [Khamenei’s] statement with [President] Obama and told him that in face of this assertion I do not have a different position and they [the Iranians] are using nuclear energy peacefully.”

Obama and the other world leaders were also fooled by the fatwa because they joined the April 16 talks with Iran believing the regime is now serious about alleviating fears about its nuclear program. But there is a problem, according to the Middle East Research Institute’s (MEMRI) investigation, the Khamenei fatwa never existed. Rather, MEMRI contends it is nothing more than a propaganda ruse.

MEMRI conducted an exhaustive search of official Iranian websites but turned up no such fatwa. Even a group called The Light of Freedom (cheragh-e azadi) submitted a question to the ayatollah regarding the fatwa. The ayatollah dismissed the question as having “no jurisprudential aspect.”

Even though the fatwa doesn’t exist on paper the Obama administration accepted the ayatollah’s public statements eschewing nuclear weapons as a potential “starting-point” in negotiating an end to the nuclear dispute. But a leading Arab commentator says the basis of the so-called fatwa—written or oral—is “truly absurd.”

Tariq Almomayed, editor-in-chief of the London-based daily Asharq al-Awsat, wrote “Tehran has sponsored and engaged with Sunni and Shiite terrorists alike, over the past decades, and these are the same terrorists whose hands are stained with the blood of innocent,” Alhomyaed said. “So after all this, how can we trust Tehran, simply on the basis of a religious fatwa?”

Trust is the key issue but deceiving non-Muslims like the world powers appear to be the ayatollah’s purpose. Iranian officials present the fatwa on nuclear weapons as a propaganda effort to “propose a religiously valid substitute for guarantees of inspectors’ access to Iran’s nuclear facilities,” according to MEMRI.

This official lie is Shiite Islam’s principle of taqiyya—“the obligation to be cautious”—use of lies for self-defense purposes. Doing so is “completely legitimate in Shiite Islam,” states MEMRI’s analysis.

Alhomayed said in his column, “Tehran has a history of failing to comply by its pledges and agreements.” Further, “The problem with the Obama administration is that it wants to pursue policies that may be acceptable to the day-dreaming cultural elite, but not to regimes that are full of cunning and deceit.”

Iran’s supreme leader is cunning and deceitful. The evidence indicates he is doing everything possible to acquire nuclear weapons to include launching fake religious proclamations to deceive the naïve.

The world powers must stop being so naïve when it comes to Iran’s chief mullah and treat him for what he is—the great deceiver. The May talks must not become the “deceiver’s” forum to advance his nuclear program while endangering the Middle East and the West.