Moments ago I learned that Chuck Colson left this life for heaven. He was a remarkable man and died leaving a wonderful legacy. Many of us are old enough to remember Watergate, a scandal that brought down the Nixon Presidency and put several of his associates in prison. Chuck was one of the first to go to jail, and there he learned firsthand the demoralizing life of prison inmates. There he also read C. S. Lewis and, through the witness of a friend, came to saving faith in Christ. And what a conversion story it was! I remember reading his first book, Born Again; it was a powerful testimony of God’s power to save a man who was known as “Nixon’s hatched man” and had bragged that he would step on his mother’s grave to get Nixon elected!

I was privileged to meet Chuck several times, most often when we shared the platform at various conferences; and, as you might remember, he spoke here at The Moody Church from time to time. In fact, we invited him here after Prison Fellowship was started and he brought six or seven prison inmates with him. “You can’t tell the difference between them and other members of the congregation—in fact, some people probably think they are new deacons,” he quipped.

Chuck always had an encouraging word for other ministries. I deeply appreciated his humility, both in personal encounters and his willingness to go to the most remote prisons in different countries of the world to witness to the inmates and help get Prison Fellowship started. He ate with inmates and prayed with them, and cared only that God be glorified. This ministry is now in more than 100 countries. 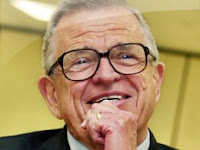 Chuck’s legacy extends well beyond Prison Fellowship, however. He became known as a leading Apologist for the Christian faith, writing many books and speaking about “World View” issues. He founded a ministry to train Christians in how to impact the culture, complete with a rigorous curriculum. Our own Angel Tree Ministry, widely used in churches around the world, was founded by him. He deeply believed that if we are to turn America around it will be because Christians finally stepped to the plate to share their faith and live out the Gospel wherever God had placed them. Though such ministries, he quite literally influenced the whole world.

I didn’t always agree with Chuck. When he came out with the Evangelicals and Catholics Together document in the early 1990s, I felt that several paragraphs in the document crossed a line that made many of us as evangelicals uncomfortable. But my interaction with him on these issues was always cordial, and to his everlasting credit, he always affirmed the great truth of justification by faith alone and preached it wherever he went.

We will miss Charles Colson. He was a celebrated spokesman for the Christian faith who informed us, challenged us and strengthened our faith in the process. The world has lost a Christian statesman, but we grieve not as those who have no hope. We know that he is with the Lord and we shall see him again. Meanwhile, his death helps us understand the verse, “Blessed are the dead who die in the Lord...their works do follow them.”

We have only seen the beginning of Charles Colson’s legacy. Only eternity will reveal its full extent. And we are reminded that eternity awaits us all.

Let us pray for his wife and family, and the ongoing ministry of Prison Fellowship.

Colson—A Guardian of the Faith • OneNewsNow