The U.S. government is in the process of building the world’s largest data complex. Located on a 240-acre site near Camp Williams, the 1-million-square-foot facility will become operational in September of next year. 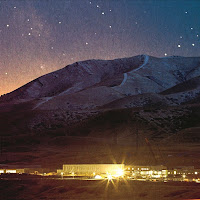 (Wired)—The blandly named Utah Data Center is being built for the US National Security Agency (NSA). A project of immense secrecy, its purpose: to intercept, decipher, analyze, and store vast amounts of the world's communications from satellites and underground and undersea cables of international, foreign, and domestic networks. The heavily fortified $2 billion center will house near-bottomless databases for all forms of communication, including private emails, mobile phone calls and Google searches, as well as personal data trails—travel itineraries, purchases, and other digital "pocket litter." It is the realization of the "total information awareness" program created by the Bush administration—which was killed by Congress in 2003 after an outcry over its potential for invading privacy.

The NSA claims the center is only to provide support for existing operations. James Bamford, a former intelligence analyst, told Wired Magazine that the center’s purpose is to allow the government to have “total information awareness.” The NSA “has transformed itself into the largest, most covert, and potentially most intrusive intelligence agency ever created. In the process—and for the first time since Watergate and the other scandals of the Nixon administration—the NSA has turned its surveillance apparatus on the U.S. and its citizens," said Bamford.

The 9/11 attacks have spurred a continuous escalation in the federal government's ability to spy on the average citizen. The skyline of Washington DC has become crowded with a host of new office buildings that fit under the banner of Big Brother.

The spending since the attacks has been insane. The 9/11 property damage was less than $50 billion. We now spend twice that number on new spy agencies. With the total War on Terror cost now at $3-$5 trillion, our enemies can declare victory by having motivated us to spend ourselves into bankruptcy.

The nation's airports were once cheerful places where people traveled to exciting destinations. Now they have the look and feel of maximum security prisons. The stress of having to deal with all the security may be the reason there has been such a rash of airline employees flipping out in the past month. The JetBlue pilot who suffered a meltdown was screaming about a bomb and Arab terrorists before the Feds hauled him off.

I firmly believe the American people are making a huge mistake in allowing the government to access every detail of our lives. Every terrorist attack aimed at U.S. citizens since the Oklahoma City bombing has been carried out by Muslims. There is no logical reason why grandmas and four-year-old children are given the same security treatment as a guy with a one-way ticket from Pakistan.

When I was in the Air Force, you were only authorized to view secret information that related directly to your job. There is no justification for why every citizen should have their secret information stored in some government data base.

What makes this vast information well so dangerous is how useful it would be to a government seeking to suppress civil liberties. Every totalitarian state needs to spend a huge amount of money and energy on surveillance. During the days of the Soviet Union, 10 percent of the East German population was employed by the government in the task of spying on their fellow citizens.

The task of snooping on individuals has been made easier the by the Internet. Most people are totally oblivious to the possibility that their phone or emails are being intercepted. The folks who do realize their conversations may be tapped just assume they have nothing that would be of interest to the government.

Now is the time for action because the last step in a dictatorship is when they take away your freedom. History tells us that the final push normally comes from a sudden event. I am greatly concerned that the day is coming when a terrorist group will carry out a weapon-of-mass-destruction attack. If we woke up to the news that the U.S. capitol building had been bombed, I fear the event would instantly put us into a police-state environment.

At this point, I don’t have much hope that the Utah Data Center will be mothballed. My hope is that soon I will be in a place where Big Brother is not able to reach me.

"Notwithstanding in this rejoice not, that the spirits are subject unto you; but rather rejoice, because your names are written in heaven” (Luke 10:17-20).

Internet activity 'to be monitored' under new laws • Telegraph