A former State Department official says the president's choice for World Bank director is a different kind of nominee, which signals that the bank is turning away from its primary mission. 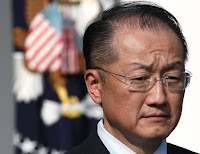 James Roberts, research fellow for economic freedom and growth at The Heritage Foundation, says Dr. Jim Yong Kim is a Korean-born American who is well-respected in the field of international healthcare and epidemics. But his field of expertise does not seem to match his new position.

"Nothing personal against Dr. Kim—it's just a little bit odd you don't have a traditional nominee coming from a background of international banking, or economics or [a] high position in the U.S. government," Roberts notes. "It sort of sends a signal of turning the World Bank away from what was really its primary mission to stimulate economic growth, and instead turning it into more of an international development, foreign aid agency."

According to the economics expert, the risk is that people will be forced to be more dependent on government and foreign aid "and not the sorts of programs that are going to be the long-term answer for those countries, or of economic growth, of private sector-led investment, strong property rights—things that will allow those countries to develop stronger economies so that they can have the resources to fight disease, provide better healthcare [and] better education for their citizens."

According to Politico, other people considered for the position were Secretary of State Hillary Clinton and U.N. Ambassador Susan Rice. Columbia University professor Jeffrey Sachs was also campaigning for the spot.