Though it would be tempting to think that Joseph Goebbels—notorious Minister of Propaganda for Hitler's Third Reich—invented the co-option of the mass media for propaganda dissemination, it would be wrong. That honor more probably belongs to America's own President Woodrow Wilson. 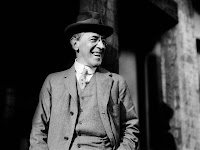 To win his first term as President, Wilson promised to keep America out of the impending Great War in Europe. But in 1916, the President decided that if he wanted a seat at the negotiations when the war finally ended—basically so he could promote his League of Nations scheme—then America needed to be in the war. So he employed famed New York Times journalist Walter Lippman and psychologist Edward Bernays to develop techniques to influence public opinion in favor of entering the war.

They did and America did.

The rest is history. In fact, Wilson, Lippman, Bernays, et al, were so successful that two up-and-coming political leaders took note of their methods and put them to good use just a couple of decades later. Josef Stalin and Adolf Hitler pushed the propaganda envelope, so to speak, but they owed much to the Wilson-Lippman model—even down to daily talking points on the issues and conference calls between the government and the news organizations. Much like today.

Of course, now we call it "spin." We even have "spin doctors" and "no spin zones." But it's still propaganda.

One can make a strong argument that we've never seen the American mainstream media so "in the tank" for a sitting Administration as we're seeing today. But then the Left argues that Fox News is the PR department for the Republican Party!

The reality is that almost every news organization operating today has some sort of "slant." Some more pronounced than others. If you want your news with a liberal progressive twist, watch ABC, NBC, CBS, CNN, or, especially, MSNBC (not to mention publicly-funded PBS). If you want a conservative take on the news, watch Fox News and... well, Fox News Channel. But, you get the picture.

Truth be told, to get just a middle-of-the-road presentation of the news, you probably need to go online and read everything you can from both sides, then filter it through your lens of common sense, historical knowledge, and intuition. But who has time to do that?

So what does this mean? It means that we all need to keep in mind that the slant and intent of almost everything we see and hear and read from the mainstream media is decided in advance in corporate boardrooms and political backrooms. It's based on what works best for the corporation or party making the decision. If they decide that you shouldn't hear certain news reports, then you won't. Welcome to the brave new world.

Speaking of media bias, have you noticed that we've seen a lot more media outrage over an ill-advised comment made by conservative radio host Rush Limbaugh than we have over the killing of six American soldiers and more than 40 Afghans after the accidental burning of some Korans in Afghanistan? Even when the UN's top diplomat in Afghanistan publicly described the Muslims' violent reaction as "legitimate" and "peaceful," and went on record calling for punishment for the American soldiers, the mainstream media couldn't be bothered. There were, apparently, bigger fish to fry. Like Rush and Israel.

Just as the media turned a blind eye to the deaths of innocents in Afghanistan and focused on American insensitivity to the Koran, the United Nations followed suit. While Syrian security forces continue to murder Syrian citizens in astonishing numbers (nearly 5,500 so far); even after a UN commission reported "widespread and systematic violations" of women's rights by Syrian forces, including sexual violence, rape, and torture, the UN Commission on the Status of Women chose to pass a resolution condemning... Israel.

According to the Commission, the major obstacle to the advancement of Palestinian women is Israel's occupation of the disputed territory. In fact, the UN Commission condemned the "systematic violation of their human rights resulting from the severe impact of ongoing illegal Israeli practices."

Never mind the rape, murder, and torture of women going on in Syria; never mind the oppression of women in Iran or Saudi Arabia; don't worry about the slave trade in Sudan and Darfur, this cruel Israeli scheme to suppress the self-reliance and advancement of Palestinian women has got to stop!

Do you remember what the Apostle Paul said about those who do not love the truth in the last days? He said that God would send a "deluding influence" upon them "so that they will believe what is false, in order that all may be judged who did not believe the truth, but took pleasure in wickedness." I believe that's precisely what we're witnessing in the earth today.

Finally, Israeli Prime Minister Benjamin Netanyahu visited the White House last Monday. The Prime Minister chose the occasion of the Feast of Purim to emphasize to the President that Israel finds itself once again under mortal threat from Persia, or modern-day Iran. President Obama continued to insist that there is still time to try further negotiations and tougher sanctions against Iran. Netanyahu persisted in affirming Israel's sovereign right to defend itself, by itself, if needed.

Then emerged a story that may prove the fallacy of President Obama's assertions. Apparently German and Japanese intelligence sources last week confirmed stories that have appeared in Der Spiegel and Welt am Sonntag that western intelligence has known for 11 months that North Korea carried out covert nuclear tests on an Iranian radioactive bomb or nuclear warhead. And they did it in 2010! A Debkafile report concluded that, "The disclosure invalidates the main point the US President made... that there was still time for diplomatic pressure and sanctions to bring Iran's leaders to a decision to halt their nuclear momentum before military action was called for, whether by the US or Israel."

I think it may be wise to remember Paul's words in Romans 13:11,

"...knowing the time, that now it is high time to awake out of sleep; for now our salvation is nearer than when we first believed."

Make sure you're ready for the moment when Jesus calls, "Come up here!" And use this time and the drama of these events to make certain that those near you have heard the "good news" that Jesus Christ died to purchase a pardon for all their sins so that when it comes time for the believers to leave this earth, they, too, will hear His call.

[PROGRAMMING NOTE: "The Hal Lindsey Report" will not be seen on Trinity Broadcasting Network (TBN) this week. It's Spring Praise-A-Thon!

Iran: We'll Never Give Up Our Nuclear Program • Arutz Sheva