The Dejudaization of Jerusalem! Really?

The new catchphrase within anti-Zionist circles is the “Dejudaization of Jerusalem.” Historically, it is as ludicrous to attempt to dejudaize Jerusalem as it is to claim that the Eiffel Tower must be “returned” to China!

Jerusalem might be at the crossroads of Judaism, Christianity and Islam, but historically and biblically, it is the Jewish capital. For instance, Jerusalem is mentioned by name over 800 times in the Bible (about 75 percent of them in the Tenach and 25 percent in the New Testament), while it is possibly only mentioned once in the Quran and not even by name but simply as the place of the “farthest mosque” in conjunction with Muhammad’s “night journey” in Sura Bani Isra-il 17.1, and even then, there are no mention of the word Jerusalem at all. It is also referred to in Sura Bani Isra-il 17.7 when mention is made of the “Temple”—and that is it for the entire Quran!

So why is it that Muslims are insisting for the acquisition of Jerusalem as one of the most holy sites under Islam? Could it be simply because Jerusalem is the holiest Jewish site and by virtue of that claim both historically and biblically, Muslims must take it upon themselves to “reclaim” Jerusalem? But reclaiming requires a prior ownership, and the Bible is clear as to whom Jerusalem belongs to. Every occurrence of the word “Jerusalem” in the Bible has within its context a connection to the Jewish people, the God of Israel or the God of Abraham, Isaac and Jacob. And all of this of course, happened centuries before the A.D. 622 birth of Islam. The Jewish prophet Daniel prayed daily towards Jerusalem while in captivity (Daniel 6:10).

Additionally, a great future awaits Jerusalem and the Jewish people as we can read in Zechariah 8:1-23:

According to Canadian lawyer and author Jacques Gauthier, it has also been proven that by international law Jerusalem belongs to the Jews. Gauthier’s 1,300-page dissertation on the topic documents the series of treaties (including the critical San Remo treaty in Italy) that established Jerusalem’s Jewish ownership beyond the shadow of a doubt.

Multiple attempts have been made and have attracted the world’s attention via a myriad of media outlets. The Gaza flotillas, the Durban I, II and III anti-Zionist conferences in the name of “anti-racism,” Mahmoud Abbas’ attempt at a unilateral declaration of statehood at the United Nations in September 2011, UNESCO acceptance of Palestine as its newest member, Christ at the Checkpoint “Evangelical” Conference towards “reconciliation” between Israelis and Palestinians, and the lists goes on.

And now the world appears to be uniting as 20 countries are joining hands and marching toward Israel under the banner of the “Global march to Jerusalem” to “unoccupy” the city on March 30, 2012, as they all converge on the capital. A million people are expected to invade Israel’s borders. The long list of international organizations and personalities bears witness of the agenda being furthered here. Bishop Desmond Tutu and Pastor N.T. Wright are amongst the many endorsers. 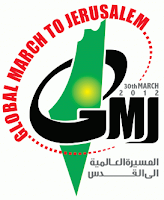 The promotional video is a mixed collage of world cities appearing to support the cause along with international personalities giving their two-thumbs up. The colors and shape of the Palestinian flag are almost on every frame, not to mention the one-sided message of a Palestinian flag layering the entire map of Israel. No two-state solution here! You can watch their promo video here.

The actual “peaceful invasion” has yet to take place, and it might be thwarted—but regardless of the outcome, Israel will be painted further in the corner of the oppressor/invader of Palestine...guaranteed!

There is a great danger here for Israel as the world community is being recruited under the false premise of a peaceful march. One is to wonder what kind of real agenda is being driven when Venezuelan President Hugo Chavez is included and Iran is endorsing the event. The potential for confusion and a plethora of opportunities for the pro-Palestinian media will be limitless. Israel is about to be demonized by an international delegation of misinformed militants at best or anti-Semitic enemies at worst. In both cases, we are getting closer and closer to the day when, in accordance with God’s Word, the whole world will turn against Israel (even though He will never allow for her complete destruction). We shouldn’t be surprised!

“Behold, a day is coming for the LORD when the spoil taken from you will be divided among you. For I will gather all the nations against Jerusalem to battle, and the city will be captured, the houses plundered, the women ravished, and half of the city exiled, but the rest of the people will not be cut off from the city.” (Zechariah 14:1-2. See also Zechariah 12:3.)

The March to Jerusalem is one more milestone being added to the destructive agenda of hatred promoted by the enemies of those God calls “the apple of my eye” in Zechariah 2:8.

In rebuff to Obama, Abbas says he will send ultimatum to Israel • Haaretz