Another Fight for Jerusalem

My friend, Italian journalist Giulio Meotti (one of the most courageous voices in Europe—or anywhere, for that matter), writing this week for Arutz Sheva, brought to light a little-known story that reflects on Jewish sovereignty in Jerusalem.

It seems there is a subtle releasing of the Mount of Olives to the Palestinians going on. Not totally shocking, given their destruction of the Temple Mount itself (two giant underground mosques have been built there in the past few years), but still disconcerting. 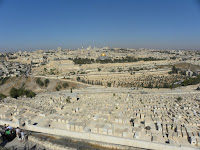 The Mount of Olives is a “stone’s throw” from the Mount, and of course is central in Jewish history. As Giulio pointed out, Jewish prophets, commoners, and prime ministers are buried there, and have been for 3,000 years. I find it gratifying that former PM Menachem Begin is interred there; he was the most biblical of Israel’s modern leaders; most are buried at the military cemetery on Mt. Herzl, in the western part of the city.

Giulio pointed out that the Palestinians are using the same effective strategy employed at Jericho, Hebron, and Nablus—violence. For a family to visit a grave on the Mount of Olives today requires a police escort.

This is shameful and ultimately a condemnation of the entire international community. UNESCO, the UN agency devoted to the whims of the Palestinians, now labels biblical sites in Israel as “Palestinian sites.”

Last summer, on a visit, I rented a car and though I was warned by hotel staff (in east Jerusalem!) not to drive there by myself, I did. The scene was chaotic, with honking vehicles, chickens, humans, and other debris littering the winding road to the summit. One had to pass through a Palestinian village; I got decidedly unfriendly looks.

I simply wanted to see the place where the 10th Roman Legion encamped before the destruction of Jerusalem in A.D. 70. The Crusaders did the same a thousand years later, as did the British in 1917. Finally, the Mount of Olives is where the IDF’s 66th Paratroop Brigade gazed on the Temple Mount on the morning of June 7, 1967—liberation was hours away.

Giulio made an excellent point near the end of his report:

The world is smug and thinks it is finally coming to the end of its Jewish problem. I believe we are remiss if we do not place issues such as the one Giulio has brought to our attention right alongside the Iranian threat. Israel is attacked on all sides today—culturally, militarily, diplomatically. Barack Obama has literally told the Israelis to trust him with regard to Iran, to actually place their lives in his hands.

I tell every Israeli friend I have not to trust him in any situation. There is only One who will protect the Jewish people now, and His methods are unstoppable:

“But I will encamp at my temple to guard it against marauding forces. Never again will an oppressor overrun my people, for now I am keeping watch.” (Zechariah 9:8)

This is yet future. And on that day, the world will no longer reject the Jewish flavor of Jerusalem. The Mount of Olives, today a decaying cemetery, will flash with the coming of the Messiah.

And all His enemies—the enemies of His people—will realize they have spent the better part of their lives digging their own graves when it comes to Israel.