The Relationship Between Morality and Liberty

America is one of the most highly regulated nations on earth. We're a nation of a million rules. Our lives are controlled by meddling bureaucrats who think they know what is best for us.

The rapid growth of government has made Washington DC a boom town. Of all the top 50 urban areas, DC is the only city unaffected by the downturn in the housing market. The nation's capital also has the highest income. Federal employees have an average income of $126,000, edging out San Jose, the home of tech giants like Adobe, Cisco Systems, and eBay. The national median income for 2010 was $50,046.

The flood of new rules has been nonstop. Most amazing is how complacent the American people are about Big Brother's efforts to micromanage their lives. I said in an earlier commentary that we passed a very major milestone on the road to tyranny when we collectively consented to the TSA's plan to grope people at airports. Months later, this procedure has become standard practice, with zero controversy.

It didn't take long for the TSA to branch out into other areas. If you're driving on the highway, you may soon see its signature blue uniforms at various checkpoints. The Tennessee Department of Safety & Homeland Security has been checking trucks at weigh stations with drug- and bomb-sniffing dogs during random inspections.

Even the local police are overstepping their bounds. You can be imprisoned these days for some of the most minor offenses. Samantha Zucker was visiting New York and found herself caught in the city's penal system for days. She was in a park past the 1 a.m. curfew when a patrol car spotted her. Rather than being fined or given a warning, she was handcuffed and forced to spend 36 hours in jail. In another incident, Emily Good was standing on her front lawn filming the police doing a traffic stop. An officer approached Good and told her she would be arrested if she didn't stop recording. She refused and was taken into custody. Despite the fact that Good had every right to film the traffic stop, she was still arrested. 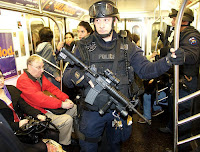 All across the country, police and sheriff's departments have become more militarized. At one time, the equipment of an average law officer would include a vehicle, a radar gun, and a revolver. Today, the officer might have body armor, remote cameras, and weapons designed for crowd control. Larger cities have whole units to deal with situations that would result from civil unrest. The city of New York has its own rapid reaction force.

In the past few years, there has been an alarming rise in the number of government raids against business and individuals - raids that go beyond the standard drug raids. In the past year, there have been raids against people who sell unpasteurized milk and against distributors who have lobsters in the wrong type of packages. Even children's lemonade stands are being given the heavy-handed treatment. This summer, the Gibson guitar company was raided by the Department of Justice, which confiscated the wood the company uses to make fingerboards. In the past, in these types of situations, a business would just receive a letter in the mail explaining the offense. Today, the police are more likely to storm in with automatic weapons drawn.

The trend towards government control started with the 9/11 attacks. The creation of the Department of Homeland Security has resulted in the largest increase in the size of the federal government since World War II.

I think the driving force behind the encroachment on our freedom is the decline in morality. When society becomes more sinful, authorities ignore the rules of the land and become a law unto themselves. This is the reason the cops arrested the woman standing on her own front lawn. He didn't like what she was doing, so he granted himself the right to apprehend her.

People who care about liberty need to be mindful of how easy it is for a nation to slip into tyranny. The fact that you are not violating any laws doesn’t mean you can’t be arrested. Over the years, I’ve read of repeated cases in other nations where citizens were jailed for absolutely no valid reason. When they asked why they were being held, they received this typical reply: “Don’t worry, we’ll think of something.”

Christians need to be sensitive to the activity of a government that is out of control. The Bible predicts that someday the world will become intolerant of true believers. The shift we are seeing now is most likely setting the stage for the Antichrist's global rule.


"And it was given unto him to make war with the saints, and to overcome them: and power was given him over all kindreds, and tongues, and nations. And all that dwell upon the earth shall worship him, whose names are not written in the book of life of the Lamb slain from the foundation of the world. If any man have an ear, let him hear. He that leadeth into captivity shall go into captivity: he that killeth with the sword must be killed with the sword. Here is the patience and the faith of the saints" (Revelation 13:7-10).