Bridge to Temple May Disappear

The engineers for the Mughrabi bridge, the bridge that leads to the temple is in danger of collapsing. 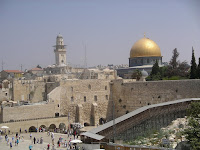 I have walked this bridge many times, and it is the only entrance for Jews to the Temple Mount. The bridge is also called the Rambam Gate and is a very sensitive subject among the Israelis, as well as the Palestinians and the Jordanians. The parties involved are squabbling over who has the authority to tear down the bridge and build a new one. Jordan wants to tear down the bridge and construct a new one. However, the Israeli Government is not too keen about having Jordanian and Palestinian workers entering the Western Wall Plaza.

The Arab world objects to any Jewish presence in the Old City, and has warned it will start a third "intifada" if the Israelis tear down the bridge and build a new one. It is the same site where an Archaeological dig took place that set off a firestorm in the Arab world. Muslims Clerics along with the PA accused the Israelis of digging under the Mughrabi Bridge in order to destroy the al Aksa Mosque and Temple Mount.

Bible prophecy calls for the Temple mount to play a major role in the end times. Genesis 22 records Abraham bringing Isaac to " Moriah" where he would sacrifice his son. David, Israel's second king purchased the threshing floor from Araunah the Jebusite, paving the way for king Solomon to build the first Jewish Temple.

Moriah, or the 'Threshing floor" is indeed the Temple Mount today. It is the most controversial, the most sensitive, and sacred piece of real estate on earth today.

Zerubabbel's Temple, later called Herod's Temple occupied the site. Both Temples were destroyed in 586 B.C and 70 A.D. Both Temples stood on that site for 1012 years.

The Dome of the Rock has occupied the site for 1,313 years, and is under the care of the Muslim Waqf, but the Israeli Government has sovereignty.

During the tribulation period, a third rebuilt Jewish Temple will occupy the site (2 Thess 2:2-4). It will be at the midway point of the tribulation that the Antichrist will desecrate the Temple. Jesus and Daniel call this the Abomination of desolation (Dan 9:27, Matt 24:15).

A fourth Temple will occupy the Temple mount, and this will be the millennial Temple (Ezek 40-46).

The Temple Mount may be a very controversial, and sensitive subject now among the Israelis and the Arab world. But according to Bible prophecy, it will be an explosive scene during Daniel's 70th week of prophecy, the tribulation period.

Bridge for Jews to Temple Mount May Disappear - Arutz Sheva