Who Is a True Jew?

Q. In the Old Testament, the terms "Israel," "Jacob," and "Jew" all seem to clearly be applied to the grandson of Abraham, the son of Isaac, the man Jacob and his physical descendants (Gen. 32:28; 35:10). But in the New Testament, the terms "Israel" and "Jew" are used in passages which are more difficult to understand which some interpret as teaching that faithful Gentiles are described as "Israel" or "true Jews" (e.g., Rom. 2:28-29; 9:4; Gal. 6:16). Can you shed some light on this?

A. I believe that much of the confusion concerning the use of the term "Israel" in the New Testament—and especially whether it refers to believing Gentiles—can be cleared away by recognizing that although, consistent with its use in the Old Testament, the term always denotes those who are physical descendants of the man Jacob, there are also passages where the writer desires to call attention to a subset from within the physical descendants of Jacob who also share the faith of father Abraham. Here are some principles to consider when reading such passages: 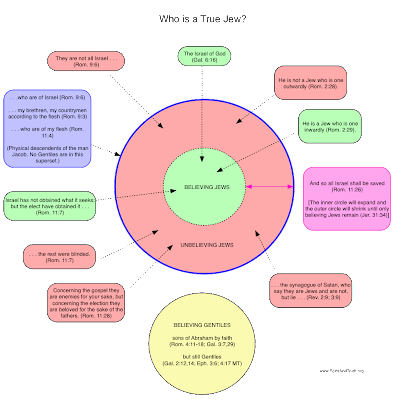 A key distinction which must be kept in mind is to notice that the New Testament never refers to Gentile believers as the seed of Isaac or children of Jacob. Instead, “those who are of faith are sons of Abraham” (Gal 3:7-9,29). This is because we Gentiles who believe participate in the unconditional promise which God gave to Abraham, “In you all the families of the earth shall be blessed” (Gen. 12:3 cf. Gal. 3:8). The way in which the Gentiles participate in this promise is through their identification with Abraham’s descendant Jesus, having believed upon Him by faith. Instead of being sons of Isaac or sons of Jacob, our relationship as Gentiles to the New Covenant goes back to its very source in the promises given to Abraham who is called the “father of all those who believe” (Rom. 4:11)—both believing Jews and believing Gentiles (Luke 19:9; Rom. 4:11-18). This is the root of the cultivated olive tree into which believing Gentiles have been grafted and unbelieving Jews have been cut off (Rom. 11:16-18). [2]

After warning the church of Philippi concerning unbelieving Jews, where Paul is emphasizing that true circumcision is of the heart, the most he will say is “we are the circumcision, who worship God in the Spirit, rejoice in Christ Jesus, and have no confidence in the flesh”. Thus Paul contrasts spiritual circumcision of the heart by faith with physical circumcision, an external rite which in and of itself does not produce saving faith. If there was ever a passage where Paul could clearly redefine Israel to mean believing Gentiles this is it, yet he does not go that far. Even here, Paul is not really teaching anything new because this theme is strongly taught within the Old Testament (e.g., Deu. 10:16; 30:6; Ps. 119:70; Jer. 4:4; 9:26; Eze. 36:26; 44:7).

I hope this helps to clarify the way in which the New Testament addresses the issue of physical descendants of Israel verses Gentiles who are children of Abraham by faith—but still Gentiles (Gal. 2:12,14; Eph. 3:6).

[2] A common error in interpreting this passage is to mistake the cultivated olive tree with its root as denoting Israel such that believing Gentiles are joined to Israel. But the root concerns the promises made to Abraham as the father of the faithful. Also, unbelieving Jews who are called “Israel” in this passage are broken off from the tree with its root. Thus, the tree and its root cannot be Israel.