The War on Bible Prophecy

In the heyday of Bible prophecy teaching, say, from 1970 until 1995, American scholars quietly seethed. Their dislike of anything that pointed to the Jews re-entry into history (and God’s provision for them) led them to resent the efforts of people like Hal Lindsey.

Certainly, there have been plenty of prophecy teachers who have fallen into the trap of “predicting” events and using Bible prophecy to do it. Yet this is completely irrelevant when talking about what the Bible actually says about the subject. It is a monumental tragedy that “prophecy haters” have been able to successfully lump Scripture with prophecy teachers and thus persuade people that the Bible itself is “wrong” about prophecy.

The effect has been to marginalize Bible prophecy at a time when it is more relevant than ever.

As I’ve said before, huge damage was done to the teaching of Bible prophecy as the last seconds of 1999 ticked away. When the “Y2K” disaster didn’t materialize, many people checked-out from Bible prophecy teaching. Very tragically, the failed predictions of certain prophecy teachers (along with the delusional Harold Camping) were seen as an indictment of the Bible’s predictive prophecy. It didn’t help that Bible illiteracy in this country is at an all-time high.

And although there is a lot of nuance to this story, it is still generally true that as Bible prophecy teaching from our nation’s pulpits slid off a cliff, so too did solid support for Israel.

In my view, we are now approaching a crisis in the context of how the next generations view the Bible, and, specifically, Israel. There are several layers to this story - in fact, I’m investigating a major piece of this puzzle, and will report in detail in the coming weeks. To me, the thickest layer involves growing evangelical disenchantment with Israel. In short, the Palestinians are beginning to see a huge harvest from the seeds of propaganda sown in the past two decades.

In Jimmy Carter and Bill Clinton, we had two (officially) Southern Baptist presidents heavily involved in “peace-making” in the Middle East. Traditionally, the SBC has been a bastion of support for Israel, in a prophetic context, as well. Isn’t it somewhat ironic that these two men did more to damage Israel than perhaps any other presidents?

Carter virtually forced Israel to return the Sinai, which began a precedent for the now-failed “land-for-peace” idea. At present, Israel has pulled out of the Sinai, Gaza, and its southern buffer zone in Lebanon, as well as from administering the disputed territories in Judea/Samaria (the West Bank).

The result has been nothing but a dramatic increase in terror activity, because the Palestinian society has been radicalized by decades of anti-Semitic filth. To this moment, the Arab world does not accept a Jewish state in its presence and this extreme xenophobia is a subject that leaders of leftist religion in America simply ignore. Just as they ignore Israel’s previous pullouts from “Arab land.”

Clinton, knowing that Yasser Arafat was one of history’s most notorious terrorists and mass murderers, plunged ahead in forcing Israel to negotiate with the PLO. The result was an unprecedented campaign of murder of Jews in the Holy Land.

One wonders what Clinton’s former pastor, W.O. Vaught, would have thought. And, evidently, the glittering trappings of the monolithic Immanuel Baptist Church in Little Rock didn’t help Governor Clinton prepare very well for shaping his biblical worldview in the context of international peace-making. Although no doubt Clinton heard often about the prophetic implications of the new Jewish state, established when he was two, he sold Israel down the river as often as he could, in his drive to establish a legacy.

I mention these two powerful men because they came from the Bible Belt, and from a biblically conservative denomination. It is no accident that they rub elbows with jet-setters and decision-makers the world over.

This brings me to the worldview of today’s evangelical leaders in America. By and large, they are concerned with how they are seen, whom they are seen with, and how influential they can become. Nowhere is this more visible than from the empire of Rick Warren.

Warren, who attended Fuller Theological Seminary precisely at the time the institution was disengaging from its embarrassing past - Dispensationalism - is a true globalist. He attends meetings at the Council on Foreign Relations, chats with Middle East dictators, and is honored by such august sources at TIME magazine. One can almost see the narcissism oozing from his pores. One wonders if he has trimmed James 4:4 from his Bible.

Warren decided long ago that the study of Bible prophecy is for losers. Traditional, old-time religion, and biblical literalism is for soft-minded morons (here I’m using the language of his protégés). Interestingly, those who maintain that there is nothing wrong with the old-time religion (such as discernment ministries, surely some of the most hated people around today) are now being labeled as “Pharisees” and worse by young Emergent pastors, who thirst for the same spotlight that has enveloped Warren in darkness.

What then can we expect of the sycophants he is now mentoring?

For those of you who don’t use the social network Twitter, I’m going to type the following “tweet” exactly as it appeared today, from Perry Noble:

“RT @RickWarren: If u fear the disapproval of Pharisees & their guilt by association tactics, people you could reach will die without Christ.”

Lots of things to unpack here.

Noble is pastor of NewSpring Church in South Carolina, and a rising star among the Emergent crowd. I encourage you to check out his blog at www.perrynoble.com, and read several.

In his Twitter message, Warren is telling his adoring audience that mean-spirited “Pharisees” lump false teachers together, unfairly. Oh and by the way, they are also impeding the efforts to reach the lost with the power of the Gospel. 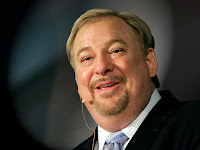 This is all a lie, but an effective one, because this message was “re-tweeted” to the max. When Warren gives marching orders, his soldiers’ boots become worn-out in no time.

Warren is really a key in understanding the growing attacks on Bible-believing Christians, because he is a bridge of sorts between Christian academics and populists like Noble. Warren is able to distill academic ivory tower language and make it popular for the populist foot soldiers in the evangelical world that work 24/7 to denigrate the old-time religion.

Warren understands the issues and because he moves in both academic and popular circles, he carries the same message that people like Dr. Mark Noll have preached for years (first at Wheaton, where Rob Bell and others attended, and now at Notre Dame).

In his famous book, The Scandal of the Evangelical Mind, Noll obviously has a sauropod-sized bone to pick with Christian mental midgets who believe the Genesis accounts of creation, and Bible prophecy.

For 256 tedious pages, Noll bashes dispensationalists and creationists, who do not practice “careful thinking.” In order to be intellectual, in Noll’s world, one must be open to new ideas and progressive theology. This means, for example, those of us who cling to Israel’s supernatural role in modern history are harming the global community, because we are fomenting war in the Middle East. This view of Bible-believers is identical to that of Brian McLaren.

As evangelical appetites for Bible prophecy teaching wane, the hunger grows to understand and embrace the “Palestinian narrative.” This narrative means that the story being promoted now is that Israel oppresses the native Arabs. That is the story. It is a story, a narrative, being used to bash Israel from every quarter, every minute of every day. Israel’s many enemies, including evangelical leaders in the West, no doubt feel fresh and ready to witness the final assault on Israel’s sovereignty (the so-called “bi-national state” solution is every bit as diabolical as overt attempts to destroy the Jewish state).

A recent letter circulated by David Gushee and Glen Stassen, professors at Mercer University and Wheaton, respectively, displays the blatant nastiness coming from these quarters. In the letter, among other harsh charges, Gushee and Stassen write:

“American Christian Zionism as it currently stands is sinful and produces sin.”

Never have I heard such hate-speech and arrogance directed toward Bible-believing Christians!

Gushee and Stassen go on to show how biblically illiterate they are when they allege:

“We write as evangelical Christians committed lifelong to Israel’s security, and we are seriously worried about your support for policies that violate biblical warnings about injustice and may lead to the outcome you most fear - serious harm to or even destruction of Israel.”

Wipe your glasses and read that last part again. They actually believe that Israel can be destroyed. The exact opposite scenario - the supernatural preservation of Israel and the judgment on her enemies - is presented in the Bible.

Don’t be fooled either by those who claim to stand for Israel’s security and a Palestinian state. Those conditions are mutually exclusive.

Let me give you another example of where the “careful thinker” mind is among evangelicals today in the American Church.

Carl Medearis recently penned a blog in which he revealed the same worldview as Gushee and Stassen. Listen to these whoppers:

“One of the reasons Jesus was crucified was because of his refusal to embrace a nationalist agenda. But Christian Zionism blesses military action by the modern state of Israel, under the banner of ‘national security,’ including the demolition of Palestinian homes to pave the way for new settlements.”

“It’s true that there are elements of Palestinian society that do not want peace, no matter the price. They need to be isolated and dealt with. The same goes for elements of Israeli society that don’t want peace. The good news is that extremists are a minority on both sides of the conflict.”

It has been thoroughly documented from numerous sources that there have been many thousands of terror attacks aimed at Israel, by the Palestinians, since Bill Clinton hosted Rabin and Arafat on the White House lawn in 1993. Extremists are not a minority in Palestinian society and, dear reader, they not only hate Jews, but they passionately hate Americans and display their venom following events like 9/11.

(By the way, the view of Medearis that Palestinian “extremists” - think Hamas - “need to be isolated and dealt with” is almost comical in its naivete. How does Carl propose to “deal with” Hamas, apart from the IDF? No one knows, including him.)

Medearis also alleges that Christian Zionists allow “obscure Old Testament promises” to drive our pro-Israel agenda. The promises are not obscure, except to one who has spiritualized-away plain meanings. The OT promises to the Jews bleed-through on nearly every page.

All this is why the film “Little Town of Bethlehem,” which promotes the Palestinian view of the Arab-Israeli conflict, has been screened at places like Wheaton College, Calvin College, Gordon College, Willow Creek Church, Bethlehem Assembly of God, and Wycliffe Bible Translators, USA.

For the first time in my memory, people from Pentecostal backgrounds, Southern Baptist, and other conservative denominations are linking arms with mainline churches, Catholics, and voices from other religions, for one reason: promoting the Palestinian narrative. You would be stunned if you knew the associations, and how deep and wide the networking is, but I am going to tell you soon.

The War on Bible Prophecy is the same as the War on Israel. The left is gaining steam in this effort, and my concern is that conservatives are largely unaware. If we think that John Hagee’s visible efforts for Israel mean that a gigantic army for Israel exists in American churches, we are deluding ourselves.

Would Jesus Back a Palestinian State? - BPB (Joel Richardson)