One Sheep, One Vote

A few weeks ago, a federal judge blocked key portions of Alabama’s new immigration law after several groups, including the Obama Justice Department and the American Civil Liberties Union (ACLU), asked for an injunction.

The Department of Justice claimed that for the states to enforce federal immigration laws that the federal government refuses to enforce violates the separation of powers.


The ACLU’s immigrants rights Web page declares: “No human being is illegal.”

Well, of course no human being is illegal. This is nonsense - a straw-man argument. People are not illegal, just their actions are, such as entering the country illegally or knowingly employing someone who is here illegally.

The page states: “For more than twenty years, the Project has been … focusing on challenging laws that deny immigrants’ access to the courts, impose indefinite and mandatory detention and discriminate on the basis of nationality.”

Opponents of voter ID laws argue that such laws are unnecessary because there is no evidence of voter fraud on a scale that could affect the course of an election.

That argument ignored a one-vote margin of victory in a Kansas City, Missouri election in 2010 in which there were at least fifty illegal votes cast by citizens of Somalia.

John J. Rizzo (Democrat) defeated Republican Will Royster for State Representative by a single vote. At least 1,798 votes that were cast in that election were deemed 'suspicious.' And it is hardly the only time in American electoral history that this has happened.

A 1996 congressional race in California was almost overturned by hundreds of votes illegally cast by non citizens A 1984 grand jury in Brooklyn revealed a widespread, 14-year conspiracy that cast thousands of fraudulent votes through impersonation fraud in state and congressional elections.

Then, of course, there is the 2008 election of Barack Hussein Obama to take into consideration. The 2008 election was so crooked that three years later, we're not sure if Obama was even legally qualified to be on the ballot, let alone if all the fake ACORN votes were caught.

Opponents of voter ID laws claim that requiring voter ID suppresses the vote and unfairly targets minorities, the disabled, rural residents, senior citizens, the poor, and that these laws are used to unfairly advantage Republicans by suppressing the voters that traditionally vote Democrat.

The most amazing thing about that argument is how widespread it is, given that it is so clearly ridiculous.

Who in America does not have any form of government issued ID? Minorities? Unlikely. Minorities drive cars, write checks, have jobs and are full citizens, just like umm, non-minorities. (Unless the "minorities" under discussion here is code for those in the country illegally, that is.)

Senior citizens? Are we talking about people collecting Social Security benefits not being able to prove they are American citizens? Or people on Medicare that can't prove they are entitled? Are they KIDDING?

The poor? I wonder how easy it is to get welfare or food stamps or aid to dependent children or Medicare without offering any documentary evidence that you exist and are not wanted by the law?

How many low-income citizens have managed to live in America all their lives without ever obtaining legal identification? What do you think that the odds are that there are more people in these groups that have never had identification than among other groups of Americans?

This is the 21st century - and Americans are among the most carefully documented populations on the planet.

Is there ANY legitimate probability that YOU can think of that an American citizen qualified to vote in an American election cannot come up with ANY form of identification? Let me put it another way:

I read the following in the Sunday supplement authored by a former Cook County (Chicago) prosecutor in the Buffalo News that was unintentionally revealing. . .


"These new ID laws are part of a larger Republican program to limit the franchise of people who are more likely to vote for Democrats, an effort that includes suppression of the youth vote by rejecting student IDs as acceptable identification and shortening the early voting periods young people disproportionably use to exercise their franchise; voter-roll purges that target minority voters; and lifetime bans on voting by ex-felons who have paid their debt to society."


"Even as citizens across the Middle East are basking in newfound opportunities for political expression in the warmth of the Arab Spring, Republican politicians in America are limiting democracy with chilling voter suppression laws. Long ago we should have learned that the problems of democracy are resolved by more democracy, not less."

More democracy, such as that demonstrated by the Arab Spring, turned Egypt over to the Muslim Brotherhood. More democracy handed control of the Gaza Strip over to Hamas.

Because America is not a democracy, thank God.

Sir William Blackstone was an English lawyer whose four-volume "Commentaries on the Law" came to be regarded as the basis for all Western common law. Noted Wikipedia's entry on Blackstone: 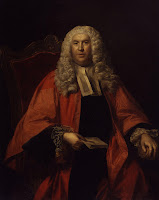 William Searle Holdsworth, one of Blackstone's successors as Vinerian Professor, argued that "If the Commentaries had not been written when they were written, I think it very doubtful that [the United States], and other English speaking countries would have so universally adopted the common law". [2] In the United States, copies influenced Marshall, James Wilson, John Jay, John Adams, James Kent and Abraham Lincoln, and the Commentaries are cited in Supreme Court decisions between 10 and 12 times a year.

Sir William's Commentaries outline the differences between a Constitutional Republic, such as that of the United States, with a pure democracy, such as the one the US installed in Iraq.

Blackstone said that in a republic, certain laws are granted by the Divine and cannot be overturned by a majority decision, as would be the case in a pure democracy.

In the American republic, the "principles which did not change" and which were "certain and universal in their operation upon all the members of the community" were the principles of Biblical natural law.

In fact, so firmly were these principles ensconced in the American republic that early law books taught that government was free to set its own policy only if God had not ruled in an area.


"To instance in the case of murder: this is expressly forbidden by the Divine. . . . If any human law should allow or enjoin us to commit it we are bound to transgress that human law. . . . But, with regard to matters that are . . . not commanded or forbidden by those superior laws such, for instance, as exporting of wool into foreign countries; here the . . . legislature has scope and opportunity to interpose." - Sir William Blackstone, Commentaries on the Laws of England (Philadelphia: Robert Bell, 1771), Vol. I, pp. 42-43

We are often accused of being 'Far Right' in our views. Many of you probably believe you are Far Right because that's what the spin doctors want you to believe. The Far Right and the Far Left live in the alternate realities of spin and partisanship.

In the middle, devoid of spin, is the baseline reality. That reality is this: God is in charge.

He gave us the right to self government, bound by certain limits. None of our leaders are perfect, none follow God's law to the letter and all have conflicting agendas they want to advance.

The worldview that favors one side or the other at the expense of baseline reality is spin. Spin is another word for "lie."

The difference between a republic and a democracy was once widely understood in America. The U.S. War Department taught that difference in a training manual (No. 2000-25) published on November 30, 1928. This official U.S. government document stated:


"Our Constitutional fathers, familiar with the strength and weakness of both autocracy and democracy, with fixed principles definitely in mind, defined a representative republican form of government. They 'made a very marked distinction between a republic and a democracy and said repeatedly and emphatically that they had founded a republic.' "

The problem with pure democracy is that it has no rules. It puts no more limits on the power of the federal government than those desired by the majority of its population. America's Constitutional Republican system limits the power of government, regardless of the will of the majority.

It is based on trusting in a loving God that guarantees our individual liberties. To work, it must also believe that loving God exists.

Once God becomes a myth, one god is as good as another. Faith in God is replaced by faith in the system, and America's system, apart from God, is just another democracy.

One "having a form of godliness, but denying the power thereof" (2nd Timothy 3:5).


"And even as they did not like to retain God in their knowledge, God gave them over to a reprobate mind, to do those things which are not convenient" (Romans 1:28).

It is fair to say that the more democratic one's worldview is, the less one likes retaining God in their knowledge. God opposes abortion, gay rights, the destruction of the family, and endorses prayer.

Remove God from American consciousness, and all the other things the Democrats demand as part of their political Shangri-la would fall into place automatically.

Someone once explained the difference between a pure democracy and a Constitutional republic this way.

In a pure democracy, two wolves and a sheep each get one vote on what is for dinner. In a Constitutional republic, voting on dinner would be prohibited by the Constitution.

And the sheep would be well-armed.

Obama 'Can't Wait' for the Rule of Law - American Thinker