After more than five years of being held hostage by Hamas terrorists in Gaza, Gilad Shalit is home with his family in Israel. 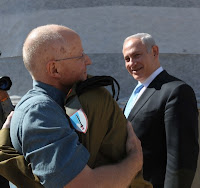 His release came at a steep price, with Israel freeing more than 1,000 Palestinian terrorists, many with "blood on their hands." Nevertheless, there were not many dry eyes in Israel on Tuesday as the nation watched the touching scene of Gilad embracing his father, Noam Shalit, who has labored tirelessly on the international stage on behalf of his son.

After being transferred to the Egyptian Sinai early Tuesday morning, Shalit crossed into southern Israel via the Kerem Shalom Border Crossing. He was checked there by Israeli army doctors who declared him to be in good health.

From there Shalit was flown to Tel Nof Air Force Base to meet with Prime Minister Benjamin Netanyahu and other government and military leaders, as well as his anxiously waiting parents.

Later in the day, the family was returned to their home in Mitzpe Hila in northern Israel.