The Forgotten Christians of the East

On Sunday night, Egyptian Copts staged what was supposed to be a peaceful vigil at Egypt's state television headquarters in Cairo. The 1,000 Christians represented the ancient Christian community of some 8 million whose presence in Egypt predates the establishment of Islam by several centuries. They gathered in Cairo to protest the recent burning of two churches by Islamic mobs and the rapid escalation of state-supported violent attacks on Christians by Muslim groups since the overthrow of former Egyptian president Hosni Mubarak in February. 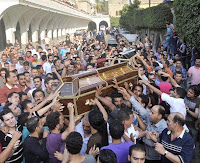 According to Coptic sources, the protesters Sunday night were beset by Islamic attackers who were rapidly backed up by military forces. Between 19 and 40 Copts were killed by soldiers and Muslim attackers. They were run over by military vehicles, beaten, shot and dragged through the streets of Cairo.

Apparently the attempt to control information about what happened worked. Monday's news reports about the violence gave little indication of the identity of the dead or wounded. They certainly left untold the story of what actually happened in Cairo on Sunday night.

In a not unrelated event, Lebanon's Maronite Catholic Patriarch Bechara Rai caused a storm two weeks ago. During an official visit to Paris, Rai warned French President Nicolas Sarkozy that the fall of the Assad regime in Syria could be a disaster for Christians in Syria and throughout the region. Today the Western-backed Syrian opposition is dominated by the Muslim Brotherhood. Rai cautioned that the overthrow of President Bashar Assad could lead to civil war and the establishment of an Islamic regime.

In Iraq, the Iranian and Syrian-sponsored insurgency that followed the US-led overthrow of Saddam Hussein's Baathist regime in 2003 fomented a bloody jihad against Iraq's Christian population. This month marks the anniversary of last year's massacre of 58 Christian worshipers in a Catholic church in Baghdad. A decade ago there were 800,000 Christians in Iraq. Today there are 150,000.

Under the Shah of Iran, Iran's Christians were more or less free to practice their religion.

Today, they are subject to the whims of Islamic overlords who know no law other than Islamic supremacism.

Take the plight of Yousef Nadarkhani, an evangelical Protestant preacher who was arrested two years ago, tried and sentenced to death for apostasy and refusal to disavow his Christian faith. There is no law against apostasy in Iran, but no matter. Ayatollah Khomeini opposed apostasy. And so does Islamic law.

Once Nadarkhani's story was publicized in the West the Iranians changed their course.

Now they have reportedly abandoned the apostasy charge and are sentencing Nadarkhani to death for rape. The fact that he was never charged or convicted of rape is neither here nor there.

Palestinian Christians have similarly suffered under their popularly elected governments.

When the Palestinian Authority was established in 1994, Christians made up 80 percent of Bethlehem's population. Today they comprise less than 20% of the population.

Since Hamas "liberated" Gaza in 2007, the area's ancient Christian minority has been under constant attack. With only 3,000 members, Gaza's Christian community has seen its churches, convents, book stores and libraries burned by Hamas members and their allies. Its members have been killed and assaulted. While Hamas has pledged to protect the Christians of Gaza, no one has been arrested for anti-Christian violence.

Just as the Jews of the Islamic world were forcibly removed from their ancient communities by the Arab rulers with the establishment of Israel in 1948, so Christians have been persecuted and driven out of their homes. Populist Islamic and Arab regimes have used Islamic religious supremacism and Arab racial chauvinism against Christians as rallying cries to their subjects. These calls have in turn led to the decimation of the Christian populations of the Arab and Islamic world.

Christians are prohibited from practicing Christianity in Saudi Arabia. In Pakistan, the Christian population is being systematically destroyed by regime-supported Islamic groups. Church burnings, forced conversions, rape, murder, kidnap and legal persecution of Pakistani Christians has become a daily occurrence.

Sadly for the Christians of the Islamic world, their cause is not being championed either by Western governments or by Western Christians. Rather than condition French support for the Syrian opposition on its leaders' commitment to religious freedom for all in a post-Assad Syria, the French Foreign Ministry reacted with anger to Rai's warning of what is liable to befall Syria's Christians in the event President Bashar Assad and his regime are overthrown. The Foreign Ministry published a statement claiming it was "surprised and disappointed," by Rai's statement.

The Obama administration was even less sympathetic. Rai is now traveling through the US and Latin America on a three week visit to émigré Maronite communities. The existence of these communities is a direct result of Arab and Islamic persecution of Lebanese Maronite Christians.

Rai's visit to the US was supposed to begin with a visit to Washington and meetings with senior administration officials including President Barack Obama. Yet, following his statement in Paris, the administration canceled all of its scheduled meetings with him. That is, rather than consider the dangers that Rai warned about and use US influence to increase the power of Christians and Kurds and other minorities in any post- Assad Syrian government, the Obama administration decided to blackball Rai for pointing out the dangers.

Aside from Evangelical Protestants, most Western churches are similarly uninterested in defending the rights of their co-religionists in the Islamic world. Most mainline Protestant churches, from the Anglican Church and its US and international branches to the Methodists, Baptists, Mennonite and other churches have organized no sustained efforts to protect or defend the rights of Christians in the Muslim world.

Instead, over the past decade these churches and their related international bodies have made repeated efforts to attack the only country in the Middle East in which the Christian population has increased in the past 60 years - Israel.

As for the Vatican, in the five years since Pope Benedict XVI laid down the gauntlet at his speech in Regensburg and challenged the Muslim world to act with reason and tolerance it its dealing with other religions, the Vatican has abandoned this principled stand. A true discourse of equals has been replaced by supplication to Islam in the name of ecumenical understanding. Last year Benedict hosted a Synod on Christians in the Middle East that made no mention of the persecution of Christians by Islamic and populist forces and regimes. Instead, Israel was singled out for criticism.

The Vatican's outreach has extended to Iran where it sent a representative to Mahmoud Ahmadinejad's faux counter terror conference. As Giulio Meotti wrote this week in Ynet, whereas all the EU ambassadors walked out of Ahmadinejad's Holocaust denying speech at the UN's second Durban conference in Geneva in 2009, the Vatican's ambassador remained in his seat. The Vatican has embraced leaders of the Muslim Brotherhood in Europe and the Middle East.

It is unclear what either Western governments or Western churches think they are achieving by turning a blind eye to the persecution and decimation of Christian communities in the Muslim world. As Sunday's events in Egypt and other daily anti-Christian attacks by Muslims against Christians throughout the region show, their behavior is not appeasing anyone. What is clear enough is that they shall reap what they sow.