A Christian pastor may be hanged within a few days under new provisions of Iran's penal code, provisions which officially codify the death sentence for abandoning Islam. Another young man has been arrested in Iran under suspicion because he has been pursuing graduate studies in America. Iran is not famous for its religious tolerance, but even those people remotely perceived as sympathizing with the West are under attack. 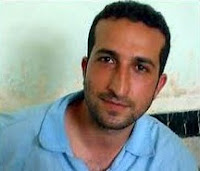 Youcef Nadarkhani, 32, is an Iranian Christian pastor who was arrested in October of 2009 when he tried to register his church of 400 people as part of the Church of Iran. His great crime? At the age of 19, Nadarkhani converted to Christianity. Because Nadarkhani was raised by Muslim parents, his conversion has been labeled "apostasy." New additions to the Iranian penal code, provisionally passed in September 2008, give the Iranian government the authority to put adult men to death for leaving Islam.

Apparently, Iranian laws do not become fast and hard right away. They are given a "testing" period in which the law is tried out. Nadarkhani is reportedly being used to test out this law.

On September 27, Nadarkhani was once again brought into court for a hearing. He was told to recant his faith. He refused. He has been threatened with death repeatedly, but death has not yet been dealt. Instead, the Iranian government plays the waiting game, hoping they will force Nadarkhani to give up his Christianity before it's all over. It hasn't worked.

Nadarkhani actually considered himself an agnostic until he converted to Christianity. Under Iranian law, however, it is not necessary to have actually professed Islam in order to be considered an apostate or blasphemer. Being born to at least one Muslim parent is sufficient, and both of Nadarkhani's parents were reportedly Muslim.

"He is one of 300 Christians who have been arrested last year. Some have been released. There's been a significant crackdown on Christians in the last year," said David Yeghnazar, the U.S. director of Elam, an organization that supports Iranian Christians.

The death threats and Nadarkhani's longsuffering faithfulness to Christ have not taken place in a vacuum. Nadarkhani's arrest has raised an international outcry that Iran was not ready to deal with. Now that he's become an embarrassment, the Christian pastor's charges have been changed. To what? Fars News Agency describes the charges against Nadarkhani to be rape and extortion, Zionism and threats to national security. In a bit of Orwellian news rewriting, Fars has accused the West of distorting the original charges against Nadarkhani to make Iran look bad.

Rape and Zionism are also punishable by death in Iran. Whether Nadarkhani is convicted as a Zionist, an apostate, an extortionist, or a rapist, Iran wants an excuse to kill a Christian pastor inside its borders. Please keep praying for Youcef Nadarkhani. He needs the continued strength and peace of Christ, as well as wisdom about how to answer every man who seeks to understand his source of hope in the middle of great suffering.

In the meanwhile, an Iranian student pursuing his graduate degree at the University of Texas went on trial Tuesday for the mere fact that he was studying in the United States. Omid Kokabee has plead not guilty, but if he is convicted he could earn up to 10 years in prison. He was arrested at the Tehran airport in February when he attempted to catch a flight back to the United States after a break at home. He has been charged with having a relationship with a hostile country.

Kokabee's studies did not involve dangerous, clandestine work. He was studying optics and had experience working with lasers, according to one of his advisers. A number of Iranians studying in the United States have faced arrest upon returning to Iran. The Iranian government believes that the United States is promoting dissension in Iran.

The truth is that the United States does not have to be actively fostering discontent in Iran. Filled with fears and suspicions, Iran continues to slap human rights in the face, turning its own citizens against their government. When people live in the kind of environment in which pastors are thrown in jail and accused of rape when nothing else looks good, then the freedom in America certainly offers an appeal to those weary of oppression.

U Texas Grad Student on Trial in Tehran - Arutz Sheva