Maj.-Gen. Eyal Eisenberg, chief of the Israeli army's Home Front Command, warned on Monday that thanks to the recent revolutions in surrounding Arab states, Israel could face a multi-front war in the very near future.

While Western leaders, and especially Western media, have portrayed the presumably pro-democracy revolutions in Egypt, Tunisia, Libya and Syria as a positive development, Israeli officials have been warning that they are quickly being hijacked by radical Islamists.

In Egypt, the Muslim Brotherhood looks poised to win the country's first truly democratic election in decades. Reports in recent days are that other Islamist groups are making their moves in post-revolution Tunisia and Libya. 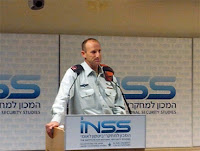 Far from being optimistic, Gen. Eisenberg told a conference at the Institute for National Security Studies in Tel Aviv that "after the 'Arab Spring,' we assess that a winter of radical Islam will arrive and as a result the possibility for a multi-front war has increased including the potential use of weapons of mass destruction."

Government officials in Jerusalem blasted Eisenberg in the local media for "exposing classified materials" and "stirring up tensions in the region."

But Eisenberg was not alone in sharing his concerns over what the coming months could hold for the Middle East.

Speaking at a news conference in Brussels on Monday, European Union counter-terrorism chief Gilles de Kerchove cautioned that the Arab revolutions could lead to a power vacuum that terrorist groups will seek to fill.

"Democracy does not happen overnight," said de Kerchove. "Let's hope [the revolutions] do not lead to some disappointment in which Al Qaeda ... might be attractive once again."

While de Kerchove's remarks were focused on Al Qaeda in the run-up to the 10th anniversary of the September 11, 2001 attacks in the US, there are many other groups in the region far more capable of radicalizing Israel's neighbors.

A perfect example of what can happen in an Arab country that experiences a power vacuum while playing host to a dangerous terror group is Lebanon. As successive Western-backed governments failed to hold the reins in Beirut following the 2005 revolt against Syrian occupation, Hizballah began to increase its power to the point that today it holds most of the important cabinet positions and enjoys veto power over the government.