The Death of Great Men

Historians have long debated the role that any one individual can play in changing the course of history. Some support the “great man theory” – the idea that one man of great vision and talent can pull his nation out of its natural orbit and set it on a new and very different course. Others argue that culture is destiny. Yes, a leader can step forward and make a bold gesture. But unless he brings his people along with him, the culture will ultimately wipe out that leader’s initiatives as certainly as the ocean envelopes and erases a sand castle.

Tragically, news from the Middle East this month has done much to debunk the great man theory. We are witnessing historic challenges to the legacies of two great men. And in the process, Israel finds itself thrust backwards in time to a more dangerous era. For Israel, September has been a most cruel month. And it’s not even half-way over. 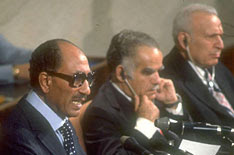 Egypt’s former President, Anwar Sadat, is often cited as an example of the great man theory in action. Back in 1977, Sadat decided to end Egypt’s state of war with Israel. In a gesture of history-changing proportions, he boarded a plane, flew to Jerusalem, and proposed peace directly to Israel’s Parliament. When Egypt and Israel signed the Camp David Accords in 1979, Egypt went from Israel’s most threatening enemy to its first Arab friend. And while the peace that emerged was far colder than the Israelis had hoped, it was still peace. Until recent weeks, Israel’s border with Egypt had been a perfectly quiet one.

But while Sadat and his successor, Hosni Mubarak, changed history, they never changed Egypt’s underlying culture. While they made and maintained the cold peace, they allowed their media and schools to continue to teach hatred of Israel and Jews. And now this culture is devouring their legacy. The culture – in the form of a Jihadist assassin — killed Sadat. And now the culture – in the form of a violent mob — has destroyed the greatest physical manifestation of Sadat’s peace: Israel’s Embassy in Cairo. Can the document long survive when its symbols are so defiled?

Even more than Anwar Sadat, Turkey’s first president, Kemal Ataturk, has served as Exhibit A in support of the great actor theory. For centuries, Turkey had ruled a Middle Eastern empire and been the seat of worldwide Islamic authority. Then Ataturk decided to create a new nation state in the Western mold with a separation between church and state. He abolished the caliphate, limited the role of Islamic courts and insisted that the Turkish language be written in Latin, not Arabic, script. It was natural that the Turkey thus oriented was the first Muslim country to recognize the State of Israel in 1949.

But even a man of the stature of Ataturk could not completely eradicate Turkey’s Middle Eastern roots. Political Islam survived, and is reasserting itself. Ataturk rests today in a mausoleum. And his seat is filled by new leaders from an Islamic party who have gradually, but steadily, steered Turkey back to its old course. Turkey is now clearly dedicated to reclaiming its former grandeur as the leader of the Middle East rather than continuing to plead for junior status in the European Union. It was only a matter of time until a Turkey thus oriented began distancing itself from Israel.

Those who believe in the great man theory are now trying to apply it — in reverse — to Israel’s Prime Minister, Binyamin Netanyahu. They claim that Netanyahu is so great in his stubbornness that he has single-handedly turned the Egypt, Turkey and the world against Israel. According to this argument, Israel was on the fast-track to peace with her neighbors until Netanyahu came in and changed course.

Israel’s peace treaties with leaders whose people remained hostile are sand castles. And now the cultural tide is coming in. Israel, and the world, would do well to remember this painful lesson. In the weeks to come, enormous pressure will be brought to bear on Israel to make concessions to an individual – Palestinian President Mahmoud Abbas. Yet Abbas’ media and schools continue to teach hate to a Palestinian people who far too often share it. And say what you will for Mahmoud Abbas, he is not a great man. We should view with caution the premise that he can succeed where the likes of Ataturk and Sadat may well have failed.

Israel and Turkey On the Brink - Human Events (John Hayward)