“Then the kingdom of heaven will be comparable to ten virgins, who took their lamps, and went out to meet the bridegroom. And five of them were foolish, and five were prudent. For when the foolish took their lamps, they took no oil with them, but the prudent took oil in flasks along with their lamps. Now while the bridegroom was delaying, they all got drowsy and began to sleep. But at midnight there was a shout, ‘Behold, the bridegroom! Come out to meet him.’ Then all those virgins rose, and trimmed their lamps. And the foolish said to the prudent, ‘Give us some of your oil, for our lamps are going out.’ But the prudent answered, saying, ‘No, there will not be enough for us and you too; go instead to the dealers and buy some for yourselves.’ And while they were going away to make the purchase, the bridegroom came, and those who were ready went in with him to the wedding feast; and the door was shut. And later the other virgins also came, saying, ‘Lord, lord, open up for us.’ But he answered and said, ‘Truly I say to you, I do not know you.’ Be on the alert then, for you do not know the day nor the hour” (Matthew 25:1–13).

Alas, we wave good-bye to chapter 24 and say hell-o to chapter 25. There are a number of items that need to be addressed as we move into Matthew 25, which impact how we should understand Christ’s intent in this passage. If we are wrong on these issues it will guarantee that we will misinterpret the passage (unless we are illogical in the process).

One of the first issues that should be recognized is that the parables and teachings in Matthew 25 are a continuation of the flow of the previous chapter. Jesus has not totally shifted gears and started speaking about something totally new when He enters this section. This means that these parables are related to Israel, (not the church), her first century rejection of His Messiahship, and the coming spoken of here relates to the second coming and judgment that will take place upon Christ’s arrival. Stanley Toussaint explains as follows:

This parable as well as the next one deals with the Jews in the tribulation period. This is seen from various facts. The context favors this view (Matthew 24:3, 8, 14, 15, 30, 31, 33, 42, 44, 47, 51). The subject being discussed is the end time, the final years before the kingdom is established. At the time the church will be absent from the earth. Therefore this section deals with a Jewish period of time. [1]

Chapter 25 highlights that since the Jewish people missed Messiah’s first coming because of unbelief and were judged temporally in A.D. 70, they need to be prepared for His return so that they will escape judgment and enter into blessing (the millennial kingdom). “He taught that following His return (Matt. 24:30) and the regathering of the nation Israel to their land (v. 31), the nation would be brought under judgment (25:1–30),” says Dr. J. Dwight Pentecost. “Christ used two parables to teach that the regathered nation will be judged to determine who is saved and who is unsaved. The purpose of this judgment will be to exclude the unsaved from, and to received the saved into, the kingdom that He will establish following His Second Advent.” [2] Jesus accomplishes His goal as He continues presenting parabolic lessons and teachings about judgment upon His return. Matthew 25 can be broken down into the following three sections: First, the parable of the ten virgins (25:1–13), second, the parables of the talents (25:14–30), and third, the judgment of the Gentiles (25:31–46). 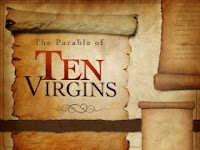 The Parable of the Ten Virgins

In a sense, Matthew 24:50–51 raises the following question: “On what basis will Israel be judged?” The answer in 25:1-13 is preparedness. The parable of the ten virgins provides a picture of living Israel brought back to the land at the end of days for a judgment to see who is prepared and who is unprepared the second time for the coming of Messiah. The focus is on Israel in the last days (i.e., the tribulation period just described in Matthew 24:4–22. The prepared enter the millennial kingdom while the unprepared are excluded.

The ten virgins represent the nation of Israel as a whole. The nation is divided into two groups of five each. One group, the wise, is depicted as prepared and waiting since they have obtained extra oil in case a delay occurs in the coming of the bridegroom. This first group represents believing and prepared Israel. The second group, the foolish, did not prepare and they represent unbelieving Israel. They were not ready for the coming of Messiah. Dr. Pentecost tells us the following:

Although a strong testimony will be given to the nation of Israel during the Tribulation (Matt. 24:14), some people will be unprepared when the King comes to institute His millennial kingdom. The prepared will be received into the kingdom to enjoy its bounty but the unprepared will be excluded. Thus this parable teaches that there will be a judgment of living Israelites to determine who is and is not prepared. This is an expression of Christ’s previous statement that “you also must be ready” (Matt. 24:44). [3]

Since this parable deals with the future nation of Israel (likely the current nation of Israel that exists today), this is not a passage that comes into play concerning the rapture. This means that the parable of the ten virgins does not support the notion of a partial rapture position, which has been argued from this, as well as other passages (Matt. 24:40–51; Mk. 13:33–37; Lk. 20:34–36; 21:36; Phil. 3:10–12; 1 Thess. 5:6; 2 Tim. 4:8; Tit. 2:13; Heb. 9:24–28; Rev. 3:3, 10; 12:1–6). This view teaches that the rapture occurs before the tribulation, but only “spiritual” Christians will be taken, while other Christians will remain through the tribulation. They also believe that multiple raptures will occur throughout the seven-year tribulation period. This view is thought to have been developed by Robert Govett in the mid-nineteenth century in England, and held mainly by British advocates such as J. A. Seiss, G. H. Lang and G. H. Pember. [4]

Since this passage, by and large, is not thought to relate to the rapture by pretribulationists because it contextually refers to Israel, it is even harder to make a case for a partial rapture. “We shrink from the partial rapture idea because other passages seem plainly to suggest that every member of the body of Christ will be caught up (2 Thess. 4:16–17; 1 Cor. 15:51–58, etc.),” notes Randolph Yeager. “Partial rapture would seem to imply rupture in the Body of Christ.” [5] Quite frankly, the same grace that saves each believer is the grace that will take one out at the rapture. One does not have to qualify through their own works or reach a certain level of sanctification to be taken at the rapture. Qualification for being taken in the rapture is not a reward for faithfulness, but like salvation itself is a free gift. One’s name is added to “the rapture manifest” when their name is added to the roll the moment one trusts Christ as his Savior. Even if a believer does not believe in the pretribulational rapture, they will be taken anyway if they are indeed a believer. I am sure some will be taken by surprise, and perhaps some kicking and screaming but they will be taken nevertheless.

Partial rapturists say that this parable pictures the part of the church that is watching and waiting for the Lord’s return as the five wise virgins who had oil and the carnal church who is left behind as the five foolish virgins. This they believe supports the notion of the partial rapture theory.

There are major problems with anyone’s attempt to apply this parable to the church to begin with, since Israel is in view. Further, the imagery does not match up with what it should be if this were actually teaching a partial rapture doctrine. The imagery used in the parable of the ten virgins does not comport with that used of the church in other New Testament passages. “The passage itself uses none of the characteristic terms relating to the church, such as bride, body, or the expression in Christ,” [6] notes John Walvoord. Instead we see that the ten virgins are merely bridesmaids who would be attending at a wedding and not brides themselves. Were this portraying in some way the church, then these virgins would need to be portrayed as brides who were waiting upon their bridegroom, which would be Christ. This is not what is found in the passage. Dr. Walvoord further explains in the following:

If watchfulness is necessary for worthiness, as partial rapturists characteristically argue, then none of the ten virgins qualify for “they all became drowsy and fell asleep.” The command to “watch” in verse 13 has, then, the specific meaning of being prepared with oil — being genuinely regenerated and indwelt by the Spirit rather than having unusual spirituality. The clear teaching is that “watching” is not enough. This passage will serve to refute the partial rapturists instead of sustaining their viewpoint. Only by the power and presence of the Holy Spirit can one be qualified for entrance into the wedding feast, but all the wise virgins enter the feast. [7]