The Crown of Righteousness

In many churches, those members who study Bible prophecy are relegated to the 'lunatic fringe' - politely - and sometimes not so politely - dismissed out-of-hand for wasting their time trying to "divine the future".

Not so. Christians that study prophecy are not trying to “divine the future” – they are earning the “Crown of Righteousness” promised to all those that love His appearing. (2 Timothy 4:8)

The Bible says that there are other rewards, or crowns, set aside for those that dedicate themselves to Christ in a number of different theological disciplines.

The Judgment Seat of Christ is the place where all of the deeds that individuals have done after they have become Christians are revealed and examined to determine whether they be good works or whether they be bad.

Let me emphasize that the word "bad" refers not to sin, but to deeds that are worthless according to His purpose. Whether or not they were sin is irrelevant – all sin is forgiven at the Cross - but every deed has consequences. 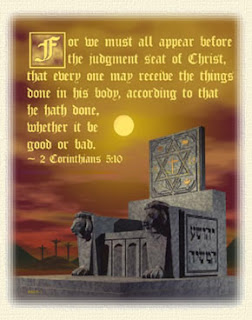 The Bema Seat evaluation, therefore, is based upon whether the works that have been done are worthwhile or whether they are worthless.

The Greek word translated as the 'judgment seat' of Christ is the Greek word 'bema'. During the Greek Olympics of Paul's day, the judge would sit on the 'Bema Seat' situated along the finish line. His judgment was to determine who won the gold, who won the silver, who won the bronze, who came in fourth, fifth, etc.

Note that the only ones judged at the Bema Seat are those who cross the finish line.

The Bema Seat is reserved for believers - those who successfully completed the 'race' and specifically to determine their running order and to award their prizes. Unbelievers will be judged at the Great White Throne.

Scripture teaches that after these works are judged, rewards will be given if the works are worthy. There will be no rewards if the works were unworthy - but that is not the same thing as being condemned.

"If any man's work shall be burned, he shall suffer loss: but HE HIMSELF SHALL BE SAVED; yet so as by fire." (1st Corinthians 3:15)

Salvation is based on whether or not you trust that Jesus Christ made full payment for your sins, as He promised He would. While we will stand before the Judge as judicially 'righteous' - that righteousness is Christ's alone.

But it is freely offered to whosoever will accept it by faith.

Once we stand before the Bema Seat, our rewards are determined - not our punishment. Our punishment, although richly deserved, has already been borne by our Savior. Now, we are judged according to our works on behalf of the kingdom.

There are those who argue, "You know, I don't think we ought to talk about our rewards. We ought to serve the Lord just because we love Him."

I agree. We ought to serve Him because we love Him, but we have every right and reason in the world to strive to earn our rewards.

Our rewards are based on our works – but not our salvation.

“If any man's work abide which he hath built thereupon, he shall receive a reward.” (2 Corinthians 3:14)

First, let's look at the different crowns available to the believer. There is the 'incorruptible crown' - what one might term a crown of self-denial. 1st Corinthians 9:24-27 teaches:

"Know ye not that they which run in a race run all, but one receiveth the prize? So run, that ye may obtain. And every man that striveth for the mastery is temperate in all things. Now they do it to obtain a corruptible crown; but we an incorruptible. I therefore so run, not as uncertainly; so fight I, not as one that beateth the air: But I keep under my body, and bring it into subjection: lest that by any means, when I have preached to others, I myself should be a castaway."

Not everybody will receive the crown of self-denial. Each of us is gifted with certain strengths according to some predetermined purpose of God. In other words, some things are harder for some than they are for others - according to God's purposes - not our own.

We are judged according to how hard we try.

There is also the Crown of Rejoicing - the 'Soul Winner's Crown'.

"Therefore, my brethren dearly beloved and longed for, my joy and crown, so stand fast in the Lord." Note that Paul is addressing people as a 'crown'. He is saying to those whom Paul has led to Christ, "You are my joy now and you will be my crown by and by." (Philippians 4:1)

"For what is our hope, or joy, or crown of rejoicing? Are not even ye in the presence of our Lord Jesus Christ at His coming?"

Translated literally, it reads, "are not even you, in the presence of the Lord Jesus Christ when we stand before Him?"

It is difficult for us to think of people in terms of a crown, but Paul emphasizes that the Philippians and the Thessalonians, among others, are the crown which he expects as an award to him at the Judgment Seat of Christ."

"Blessed is the man that endureth temptation: for when he is tried, he shall receive the crown of life, which the Lord hath promised to them that love Him."

The Lord Himself also speaks of the Crown of Life reward, promising: "be thou faithful unto death, and I will give thee a crown of life."

'Faithful unto death' is not a condition of salvation - salvation comes by grace through faith in the efficacy of Jesus' sacrifice for sin at the Cross. Keep in mind that the only ones that will stand before the Bema Seat are ALREADY saved by grace.

The Crown of Endurance won't be given to every believer - the Scriptures say of even those who receive NO crowns, as previously noted, "he shall suffer loss: but HE HIMSELF SHALL BE SAVED; yet so as by fire."

There is the Crown of Glory - the crown of the 'undershepherd' or the 'pastor's crown'.

"The elders which are among you I exhort, who am also an elder, and a witness of the sufferings of Christ, and also a partaker of the glory that shall be revealed: Feed the flock of God which is among you, taking the oversight thereof, not by constraint, but willingly; not for filthy lucre, but of a ready mind; Neither as being lords over God's heritage, but being ensamples to the flock. And when the chief Shepherd shall appear, ye shall receive a crown of glory that fadeth not away." (1st Peter 5:1-4)

Not every pastor or undershepherd will receive this crown, either. There are those who will fail the test of ‘willing service’ or those who set themselves up as 'lords over God's heritage' instead of being examples to their flocks, or those who fail to feed their charges with God's Word.

Finally, there is the Crown of Righteousness.

"Henceforth there is laid up for me a crown of righteousness, which the Lord, the Righteous Judge, shall give me at that day: and not to me only, but unto all them also that love His appearing." (2nd Timothy 1:8)

Those who study prophecy, those who dedicate themselves as watchmen on the wall, ready to give the warning of His soon appearing, will receive the Crown of Righteousness from the Righteous Judge at the Bema Seat.

Note what Paul did NOT say. He did NOT say, "If you keep the faith, you will receive the Crown of Righteousness." Instead, he says, "If you love His appearing, you will."

Personally, I am not certain that I will receive the crown of self denial. I am not too sure that I keep my body under control enough to deserve this reward.

I am not too sure I will win the soulwinner's crown, although it is one I really, really hope to earn.

I am not sure that I will get the Crown of Glory - as an undershepherd, I have many shortcomings.

I pray for the Crown of Life for enduring life's trials - but I am not certain that I have endured them with the long-suffering love of Christ as I should.

So I am not sure about that one, either.

But I am hopeful of the Crown of Righteousness - it is the easiest one to get. My righteousness is not my own, but that of Christ's, and my love of His soon appearing is an all-consuming passion.

The point to it all is this: We will all one day stand before the Bema Seat - but the Bema Seat is where we are judged for our rewards.

Whether or not I receive all - or even any - of the rewards that are available to me as a believer, I have the certain assurance that, even if I suffer loss, I will still enter heaven, even if it is 'as if by fire'.

And so will all those who have trusted Jesus for their salvation.

“Whether Paul, or Apollos, or Cephas, or the world, or life, or death, or things present, or things to come; all are your's."

What is the purpose of the Judgement Seat of Christ? - Grace to You (John MacArthur)

The Future Destiny of the Universal Church - BPB (Arnold Fruchtenbaum)