Why Are We Ignoring Simple, Painless Debt Solution?

Suppose you were so broke – I mean so hopelessly in debt – that in just a few days your money would run out and you'd find it difficult just to stay in your home and feed your family.

But then, miraculously, you discovered a large stash of money you had completely lost sight of, but which would easily take care of all your family's expenses for the rest of the year, giving you plenty of precious time to figure out how best to deal with your long-term financial situation?

Wouldn't that be cool?

Of course. And that's exactly the kind of overlooked money stash the United States government has at its disposal – right now. Stay with me.

Washington today is dominated by the daily melodrama, propaganda and brinksmanship of the debt-ceiling debate. The Republican House is operating in good faith, but is opposed by the modern federal government's other major branches – the Senate, the White House and the Propaganda Ministry (aka "mainstream media").

The city is approaching panic level. Minnesota congresswoman and GOP presidential candidate Michele Bachmann correctly notes that Obama, should he invoke a rogue interpretation of the 14th Amendment and bypass Congress to raise the debt ceiling on his own authority, "would effectively be a dictator." Likewise, Florida Rep. Debbie Wasserman Schultz, chair of the Democratic National Committee, absurdly accuses House Republicans of the same thing, imposing "dictatorship" on the country while trying to "spark panic and chaos."

So here's the question: With this game of cosmic chicken currently being played with its myriad plans – "Cut, Cap and Balance," the "Gang of 6 plan," Harry Reid's plan, Boehner's latest plan and so on – what about the remarkably simple and painless plan offered by GOP presidential candidate and Texas congressman Ron Paul? 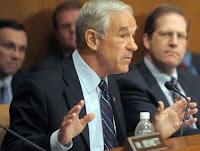 Oh. You never heard about that one?

Neither have most people – in fact, it seems to be entirely absent from the debate in Congress.

When I called Paul's D.C. office this morning to ask why his plan hadn't gotten more traction, communications director Rachel Mills told me, "It's too bad it wasn't taken more seriously than, say, dependent seniors not getting Social Security checks. We heard plenty about that."

Here's the plan in a nutshell: Out of the current $14.3 trillion federal debt we keep hearing is rapidly approaching the congressionally approved borrowing limit, over $1.6 trillion of that sum is money you and I "owe" to the Federal Reserve, in the form of bonds the Fed bought from the U.S. Treasury over the last couple of years in implementing its controversial "quantitative easing" policy.

Paul, chairman of the House Financial Services Subcommittee on Domestic Monetary Policy and arguably more knowledgeable about monetary policy than any other member of Congress, says just don't pay it back, because it's not a real debt.

Paul's plan starts with the Federal Reserve. In the last year or two the Fed has been buying up U.S. Treasury bonds in an effort to lower interest rates and boost the economy. The most recent round of that buying has been dubbed QE2, and has come under a good deal of criticism, though most economists agree that it was a generally helpful policy. The result is that the Fed now holds nearly $1.7 trillion in U.S. debt. But that is really phony debt. The Treasury pays the interest on the debt on behalf of the U.S. government to the Fed, which in turn returns 90 percent of the payments it gets back to the Treasury. Nonetheless, that $1.7 trillion in U.S. bonds that the Fed owns, despite the shell game of payments, is still counted in the debt ceiling number, which caps that amount of total federal debt at $14.3 trillion.

Paul's plan: Get the Fed and the Treasury to rip up that debt. It's fake debt anyway. And the Fed is legally allowed to return the debt to the Treasury to be destroyed. A trillion and a half dollars is currently about what spending is expected to exceed tax revenue in 2011.

So, dissolving the phony debt the government (remember, that means you and me) "owes" the Federal Reserve would cover all our government's expenses, when added to expected tax revenues, for the rest of the year.

Now, Ron Paul is a big opponent of the Federal Reserve; in fact he favors its abolition. So does his debt plan require the end of the Fed, and would it therefore be favored only by Fed critics?

Not at all. Even left-of-center economist Dean Baker, co-director of the progressive Center for Economic and Policy Research, says it's a good idea. Here's how Baker explains it:

The basic story is that the Fed has bought roughly $1.6 trillion in government bonds through its various quantitative easing programs over the last two and a half years. This money is part of the $14.3 trillion debt that is subject to the debt ceiling. … Each year, the Fed refunds the interest earned on its assets in excess of the money needed to cover its operating expenses. Last year the Fed refunded almost $80 billion to the Treasury. In this sense, the bonds held by the Fed are literally money that the government owes to itself.

Unlike the debt held by Social Security, the debt held by the Fed is not tied to any specific obligations. The bonds held by the Fed are assets of the Fed. It has no obligations that it must use these assets to meet. There is no one who loses their retirement income if the Fed doesn't have its bonds. In fact, there is no direct loss of income to anyone associated with the Fed's destruction of its bonds. This means that if Congress told the Fed to burn the bonds, it would in effect just be destroying a liability that the government had to itself, but it would still reduce the debt subject to the debt ceiling by $1.6 trillion. This would buy the country considerable breathing room before the debt ceiling had to be raised again.

Judge Andrew Napolitano, on his excellent Fox Business show "Freedom Watch," plugged the Paul plan twice this week. "With respect to the Fed," intoned the judge, "Congressman Ron Paul has recently pointed out nearly $2 trillion of the $14.3 trillion in national debt is owed to the government's own bank – that would be the Federal Reserve. That should be defaulted first; it's money the government owes itself."

In fact, last month, Paul told CNN that the world's investors would likely regain confidence in the U.S. were it to wipe out the debt owed to the Fed: "They'll say, 'Hey, they've just reduced the deficit by over a trillion dollars, now they can handle it. They can go back to meeting their other obligations,'" Paul said. "It might give some reassurance to the market."

Good question. Critics have grasped at anything and everything that could conceivably go wrong to discredit Paul's plan: "Ron Paul's plan is just an accounting gimmick." "Paul's plan to tear up T-notes would lead to inflation." "I would think that could indeed cause liquidity problems for banks for low excess reserves." And get this one: "There is no practical difference between raising the debt ceiling with this debt ostensibly outstanding and lowering the debt outstanding by canceling it in order to create space under the existing debt ceiling, except that the Fed loses some flexibility in managing the money supply."

You're telling me that my children and your children are going to have to slave for decades to earn $1.6 trillion to "pay back" a private banking cartel whose stockholders are the nation's best-kept secret, and all because you're worried about possibly causing "liquidity problems for banks for low excess reserves" or the Fed "los[ing] some flexibility in managing the money supply"?

Do you have any clue how much money a trillion dollars is? Let me help you out: If you had gone into business on the day Jesus Christ was born, and your business lost a million dollars every day, 7 days a week, 365 days a year, it would take you until October of 2737 to lose $1 trillion.

Here's another way to think of it: Spending money at the rate of one dollar every single second, or $86,400 every day, it would take you nearly 32,000 years to spend $1 trillion.

But it takes the Fed only the time required for the requisite keystrokes to create this kind of money out of nothing. Seriously, even the proverbial printing press is no longer required to create what we call "printing press (fiat) money." It's just a computer entry. But it takes your children and grandchildren umpteen generations of blood, sweat and tears to earn this kind of money.

It's a phony debt. It should not be "repaid" – not now, not ever. So why is there no discernible debate in Congress over Rep. Ron Paul's plan?

The Federal Reserve has devalued our currency – once "as good as gold" – 95 percent since its founding a century ago. It has also caused many major economic downturns during that same period, including, as Fed Chairman Ben Bernanke himself has admitted, the Great Depression. Here's a chance to finally get a little benefit from this troublesome institution.

Republicans in the House: Is anybody home?