Isn’t it interesting that in our own day, one of the most significant controversies occupying the nations is that of jurisdiction over the Temple Mount in Jerusalem? What an incredible coincidence that what should be an inconsequential and forgotten piece of real-estate associated with a religion of antiquity today causes great perplexity among both religious peoples and secular skeptics the world over! Yet those who study the Bible know from the Master of history that what we witness today concerning the controversy over the Temple Mount is but a precursor to a subsequent day when the city of Jerusalem will become the major concern of all nations as they oppose what God has declared in the pages of Scripture (Zec. 12:2-3). Truly “the nations rage and the people plot a vain thing!” (Ps. 2:1) 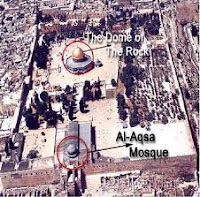 As of A.D. 2011, the two most dominant features visible upon the Temple Mount are the Dome of the Rock and the Al-Aqsa Mosque. But this is from man’s point of view. God recognizes neither of these structures as His Temple. Yet the piece of real-estate occupied by these buildings has great Biblical significance, for it is Mount Moriah. The importance of Mount Moriah is established by a number of key historical events which have taken place there: [1]

For Islam, only the first of these events is significant. [3] Even then, Islam claims that it was Ishmael, not Isaac, who was offered up by Abraham (see Dome of the Rock). Although ample evidence exists that Islam recognized the Temple Mount to have been the historic site of Solomon’s Temple in the past, more recently it has served Islamic political interests for some to deny any previous historical Jewish presence on the Temple Mount.

For Judaism, only the first two events are of significance, since Judaism rejects the idea that Israel crucified her Messiah, God in the flesh.

All three events are of great significance to Christians, for they evidence the consistent purpose of God in their shared location:

Therefore [the sacrifice of Isaac took] place nowhere else than on “Moriah,” the mount where “God is seen” (Gen. 22:14), where later the Temple stood (2 Chr. 3:1), where upon the altar of burnt offering all the sacrifices which pointed to Christ would be brought, and where in the death hour on Golgotha the veil between the holy and all-holy places would be rent (Mark 15:38). [4]

Endnotes [1] We have purposefully omitted Mohammed’s fabled night journey to Jerusalem, the Mi’raj (Surah 17:1) because we do not believe it to be factual.
[2] Jesus was crucified outside the gates of Jerusalem (Heb. 13:11-13) on Mount Moriah.
[3] Actually, all three are highly significant to all men everywhere, although most do not recognize it.
[4] Erich Sauer, The Dawn of World Redemption (Grand Rapids, MI: Eerdman’s Publishing Company, 1951, c1964), 102.