The Middle East Quartet of Russia, the United States, the European Union and the United Nations will today meet to discuss methods the group is hopeful may end the current standstill in Israeli-Palestinian peace negotiations before September when the Palestinians hope to unilaterally declare statehood with the help of the United Nations by putting the matter to a vote in the U.N.'s General Assembly.

As I reported here months ago, President Obama has requested that Israel agree to return to its pre-1967 borders as a foundation for resuming peace talks between the two rival factions, which is precisely what the Palestinians, the terrorist group Hamas and other enemies of the Jewish state have been seeking. In response to that request, Israel has logically argued that to do so would leave their state indefensible. Thus, an impasse exists - one the Palestinians have no reason to even attempt to alleviate, given the entire Quartet is in agreement with President Obama's recent position taken. 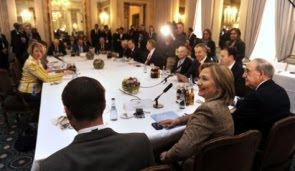 How can Israel begin a serious discussion of peace with the rival Palestinians when the Palestinians are unwilling to permit Israel enough land to defend itself from hostile military actions? Furthermore, how can Israel trust the Palestinians when they will not, in any fashion whatsoever, state that Israel is currently the homeland of the Jewish people or will be so at the conclusion of any successful negotiated peace? The answer is obvious. It can't and yet it seems a countdown is underway for progress to be made in the Israeli-Palestinian peace process.

With September looming mere months away, not to mention a potentially existential crisis state for Israel, an idea scheduled to be pitched today by European Union foreign policy chief Catherine Ashton is for a peace conference to be hosted by France prior to the request for a unilateral declaration of Palestinian statehood being brought before the U.N. General Assembly in September. Should such a conference occur, it will be very interesting to see the outcome because bible prophecy seems to indicate the European Union is going to play a critical role in a perceived peace eventually coming to the troubled Middle East. Will the news events discussed within this commentary bring us closer to that coming to pass? I have no idea, but the months ahead are going to make for some interesting observation to say the very least.

Netanyahu: We are ready to renew negotiations tomorrow - Jerusalem Post

Abbas: Palestinians to decide on peace after Quartet meeting - Xinhua

Ya'alon: September is all about scare tactics - YNET News