It was a shock heard around the world. On Thursday, May 19th, with the visiting Israeli Prime Minister Benjamin Netanyahu waiting in the wings, American President Barack Obama clearly broke with traditional U.S. Mideast policy by demanding that Israel return to the borders so indefensible that Arab invaders attempted several times to wipe Israel off the map of the Middle East. They left Israel with such slender dimensions that no enemy could resist the temptation to take on the tiny nation. In the 1967 Six-Day War, Israel kept all the land it gained. In so doing, it moved at last past the borders that Israelis had variously referred to as “holocaust borders” or “Auschwitz borders.”

Israel’s independence seemed secure at last, defended by America. It has been assumed that our nation, above all others, would understand and fight to preserve the concept of individual liberty, as enunciated by our own Declaration of Independence. Its words ring with the ideals of individual liberty under God. How could we fail to support a struggling Israel, when our own founders had identified our great cause in 1776 in their own...

“When in the Course of human Events, it becomes necessary for one People to dissolve the Political Bands which have connected them with another, and to assume among the Powers of the Earth, the separate and equal Station to which the Laws of Nature and of Nature’s God entitle them, a decent Respect to the Opinions of Mankind requires that they should declare the causes which impel them to the Separation.

“We hold these truths to be self-evident, that all men are created equal, that they are endowed by their Creator with certain unalienable Rights, that among these are Life, Liberty, and the Pursuit of Happiness — That to secure these Rights, Governments are instituted among Men, deriving their just Powers from the Consent of the Governed …”

Guided by our own words, how could we allow the only representative government in the Middle East to sink into oblivion? The particular irony is that it’s all happening amidst the howls of a vast Islamic sea of voices, crying “Death to Israel!”

Speaking on that Thursday at the State Department, Barack Hussein Obama uttered the following unequivocal declaration:

“The United States believes that negotiations should result in two states with permanent Palestinian borders with Israel, Jordan and Egypt and permanent Israeli borders with Palestine. The borders of Israel and Palestine should be based on the 1967 lines, with mutually-agreed swaps, so that secure and recognized borders are established for both states. The Palestinian people must have the right to govern themselves and reach their potential in a sovereign and contiguous state.”

Netanyahu had come to the United States for talks with the President, and this represented a full slap in his face. The next day, on Friday morning, the two appeared for a live Press Conference from the White House Oval Office. After some introductory remarks, Obama welcomed Netanyahu, who responded with his frank and honest assessment of the “peace process.”

The following excerpts reveal his terse statement, apparently a last-ditch attempt to educate the President about the realities facing Israel:

“I think for there to be peace, the Palestinians will have to accept some basic realities. The first is that while Israel is prepared to make generous compromises for peace, it cannot go back to the 1967 lines, because these lines are indefensible, because they don’t take into account certain changes that have taken place on the ground, demographic changes that have taken place over the last 44 years. Remember that before 1967, Israel was all of 9 miles wide – half the width of the Washington Beltway. And these were not the boundaries of peace; they were the boundaries of repeated wars, because the attack on Israel was so attractive for them.

“So we can’t go back to those indefensible lines, and we’re going to have to have a long-term military presence along the Jordan.”

Many later remarked that Netanyahu’s tone was that of a teacher, speaking to a pupil who didn’t really understand the situation. Having made his first point, his educational talk continued:

“The second is – echoes something the president just said, and that is that Israel cannot negotiate with a Palestinian government that is backed by Hamas. Hamas, as the president said, is a terrorist organization, committed to Israel’s destruction.”

He referred, of course, to the fact that Hamas has now been joined with Fatah in a unified front that represents the Palestinian cause. But Netanyahu didn’t stop there. He also referred to the “Palestinian refugee” problem:

“Now, 63 years later, the Palestinians come to us and they say to Israel: accept the grandchildren, really and the great-grandchildren of these refugees, thereby wiping out Israel’s future as a Jewish state.

Such blunt language, publicly directed at the President of the United States, is practically unprecedented. It was the precise and patient speech of a teacher to an ignorant student.

The world often overlooks the refugee problem, caused by the continuing unwillingness of the Arab states to absorb the Palestinian refugees living among them. Many Palestinians falling into this category desire to retain their identity and status as a homeless population. Refugee camps, set up in 1948 and 1967, have been continually funded, both by the US and individual Arab states. The camps outside Israel have gradually been emptied; those inside Israel became the breeding ground for the Intifadas, the first of which came in December of 1987.

When President Obama called for a return to the pre-1967 borders, it represented a radical reversal of US-Israel policy. It was a spectacle of virtual betrayal, representing a particularly dark day in international diplomacy, and the beginning of a steepening defense posture for Israel, feeling even more isolated than before.

In his White House statement, Netanyahu was simply trying to restate the obvious elements of conflict that surround Israel. For the last 63 years, the tiny state has fought off innumerable invasions and terrorist acts, all designed to end the existence of the only parliamentary democracy in the Middle East.

And at this season of the year, when July 4th rolls around and Americans celebrate our own Declaration of Independence, the Presidential statement is also an ironic denial of the very thing we have so often passionately fought and died for. The United States was born on the premise that a representative democracy, free of international threat, would provide the life intended by our Creator. 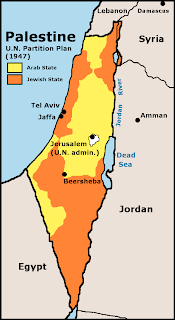 Israel is based on the same premise. On the 29th of November 1947, the United Nations General Assembly voted to establish a Jewish, as well as an Arab state. Unfortunately, the proposed map of Israel was so dissected and twisted that peaceful coexistence became a virtual impossibility. The new Jewish state was cut into three segments, excluding Jaffa and Jerusalem as well as Judea, Samaria and northcentral Israel. The Jews accepted the partition plan, but the Arabs vigorously rejected it, attacking Jewish settlements everywhere. Throughout December of 1947, as well as January and February of 1948, the Arabs continued an unending onslaught of attacks, large and small. Finally, in the wake of a battle for Jerusalem that raged between April 1st and mid-May, the United Nations granted Israeli statehood on May 14th, 1948.

On the next day, May 15th, six Arab armies – Egypt, Syria, Transjordan, Lebanon, Saudi Arabia and Iraq – synchronized a mass invasion of Israel. In a rapid advance, they appeared on the verge of success in their goal of driving Israel into the Mediterranean Sea. But after ten days of fighting the Israelis mustered a successful counterattack. On the 11th of June, 1948, a truce was signed.

But Israel was forced into a full-scale defensive posture, staving off a series of attacks between 1949 and 1967, and defending a country whose central portion averaged a ridiculously-slender ten to fifteen-mile width. It essentially begged the enemy to attack, since no real defense could be mounted. Finally, in the Arab attacks that culminated in the 1967 Six-Day War, Israel won full possession of the territory from Lebanon and the Golan Heights, all the way to the Suez Canal on the west, then southward to Sharm el Sheikh at the southern tip of the Sinai Peninsula.

That was 34 years ago. Now, Israel is being asked to retreat to the borders they defended in that first war in 1949. However, the Arab League has acquired much military experience and many weapons. Between Hamas to the west and Hezbollah to the north, they face as many as 40,000 rockets, all of them secured in well-hidden and sometimes moveable launch zones.

The Stakes Are Raised

On the Sunday following Obama’s call for an Israeli retreat, he spoke before the annual assembly of the American Israel Public Affairs Committee (AIPAC). This appearance made it clear that he was concerned that his proposed formula for peaceful coexistence on the borders of Israel could cost him political support as he runs for re-election in 2012.

In his address, he forthrightly repeated his view that peace talks should begin on the general premise that Israel’s only legitimate borders are the pre-1967 partition lines. It must always be remembered that Jerusalem was divided during that period. The great victory of the Six-Day War was the liberation and uniting of Jerusalem. The Temple Mount, the Old City, the Mount of Olives and much traditional Jewish territory became part of a united Jerusalem.

A large part of the Obama proposal will divide Jerusalem once again, with the Temple Mount and Old City becoming contested territory. This directly confronts the Jerusalem Temple Institute, which has plans to establish a presence on the site of the First and Second Temples.

Can “peace” come when ownership of that prized high ground is so violently contested? Can Israel find agreement with Hamas, Fatah and Hezbollah, all of whom have sworn Israel’s annihilation? The prophet Zechariah answers this question in a distinctly negative way:

“Behold, I will make Jerusalem a cup of trembling unto all the people round about, when they shall be in the siege both against Judah and against Jerusalem.

“And in that day will I make Jerusalem a burdensome stone for all people: all that burden themselves with it shall be cut in pieces, though all the people of the earth be gathered together against it” (Zech. 12:2,3).

Perhaps our President should more thoroughly apprise himself of the biblical view.

Those Surrounding Israel to Be Devoured! - BPB (Bill Salus)