CNN's Anderson Cooper Is a Fraud, Walid Shoebat Is Not

Last January 24, Kerry Rubin of CNN's Anderson Cooper 360° contacted me. This was just a few days after Hamas-linked CAIR had tried to strong-arm the Defense Department into dropping me as a consultant to the U.S. military. Rubin led off by saying that Cooper wanted to expand his perspective on jihad issues and wanted to start coming to me for information and as someone Cooper could interview on the air about relevant news items. 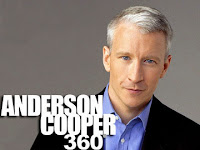 Given Cooper's hard Left bias, and the Left's warmly positive view toward the global jihad and Islamic supremacism, this struck me as about as likely as Barack Obama suddenly appointing Sarah Palin as his Secretary of State, but I had nothing to lose by listening to her, and Rubin's real agenda almost immediately became clear. She began asking me about my talks to the military: who organized them, under what auspices did I speak to military groups, how often did I give these presentations, what did I say in them, etc. It was obvious that she and Cooper were carrying water for Hamas-linked CAIR, and wanting to do a hit piece on "Islamophobes" (i.e., truth tellers) consulting for the U.S. military.

I gave terse answers to Rubin's questions, and fairly soon, perhaps sensing that I wasn't falling for her dishonest gambit about Cooper wanting to use me as a consultant, she abruptly claimed she was getting a call that she had to take and promised to call me right back. I never heard from her again - but her entire approach to me illustrated the low and underhanded tactics that Leftist "journalists" are willing to employ in service of their masters' agenda.

Anyway, now it appears that she and Cooper decided, at least for their opening salvo against freedom fighters, to get Walid Shoebat in their crosshairs rather than me. Their attack job on him aired the other night. Here, Joel Richardson sets the record straight in defense of Walid:

"CNN's Anderson Cooper Is a Fraud" by Joel Richardson (WND.com):

A few months ago, after appearing on the Glenn Beck show, I was admittedly a bit amused to watch the fallout unfold as radical left wing news outlets from George Soros' Media Matters to MSNBC's Fonzie-esque Rachel Maddow dedicated large segments of space to attack me.

I've never had a shred of confidence in such leftist media outlets, but I have to admit I was still quite shocked at the shamelessness with which these so called reporters purposefully lie to their audiences.

For most observers of the daily news cycle, this is all simply par for the course. But until you yourself have been personally attacked and lied about in the national media, its hard to truly grasp how outright evil these people really are.

As far as the attacks against myself, I've never felt the need to respond. But when CNN's Anderson Cooper and Drew Griffin aired an outright hatchet job against my friend Walid Shoebat, I knew I had to speak up.

To keep it simple, there were three primary accusations leveled against Walid, and all three are completely bogus.

First, Cooper and Griffin made great efforts to infer that Walid was not actually using any of his Foundation's monies to help rescue persecuted Christians as he claims. Cooper and Griffin concluded their show by whining that neither Walid nor his manager would reveal exactly how much money was spent for this cause. When asked about this, Walid rightly responded by saying that, "it's none of your business". Darn right!

These "gotcha" reporters have proven themselves to be entirely unworthy of compliance. As the proverb of Jesus says, "do not cast your pearls to the swine".

But in light of the doubts their hit piece will surely sow in the minds of the more gullible of their watchers, I do have some things to say to this issue.

I spent hours on the phone vetting this man. I also spent hours networking with Christian missionaries, safe houses in foreign countries as well as Walid and his manager, as they both worked tirelessly and thanklessly to help this man and his family. I heard the frustration in their voices when few ministries would offer more than a willingness to "pray about it". And I am also aware of the tens of thousands of dollars that were spent by Walid and his Foundation on this one family.

So when Anderson Cooper and his partner in crime infer that Walid is a "fraud" or not using funds properly, I can only shake my head in utter disgust.

Another of Cooper's charges was that Walid never spent any time in the Mascubia prison. The primary basis for Cooper's triumphal expose were the words of some guy who claims to be Walid's fourth cousin.

And not only was this guy a distant relative, he is also demonstrably a close relative to at least two well known terrorists.

But if relying on such a ridiculous source with proven connections to terrorists is not pathetic enough, what is truly embarrassing is that another left wing hit piece written only three years ago, which is easily available online included an interview with another much closer relative of Walid's who openly states that Walid spent time in the Mascubia prison, exactly as Walid has said all along.

The reporter was Eileen Fleming, who wrote a piece for Op-Ed news, the by line of which is "Progressive Tough Liberal News and Opinion".

In this article, Fleming includes an interview with one of Walid's relatives, Kamal Younis who Fleming claims, had checked his facts with other relatives of Walid. According to Younis,

"In 1976, his sister Mona was coming home from school with her friends and were stopped and beaten up by Israeli soldiers, they nearly broke Mona's back. This made Walid very angry and shortly thereafter he attended his first demonstration against the occupation. In 1977 Walid was caught distributing Palestinian flags and was arrested and held for about two weeks in Mascubia Prison, until his mother went to the Embassy and got him released... But, when he was in jail he met someone who invited him to join a group against Israel."

But Cooper's report leaves one with the clear impression that Walid is lying about his stay in Mascubia prison. Cooper claims triumphantly that CNN checked the records at Mascubia and there was no record of anyone named "Walid Shoebat" having ever been there.

This is both sloppy and deceitful reporting in the extreme. First, "Walid Shoebat" is not even Walid's actual legal name, and any reporter worth his salt would have known this. Second, if Cooper had simply done some simple due diligence, he would have easily found Fleming's interview with Younis. So is Cooper an utter amateur incapable of using Google, or is he simply an agenda driven liar? I see no other options.

Next, Cooper and Griffin attempted to cast Walid as a liar regarding his claims to have planted a bomb on the Bethlehem branch of Bank Leumi. Cooper and Griffin claim to have personally called the bank. The problem is that this bank hasn't existed for years. Called to task, the shoddy reporting team changed their story and claimed to have called the Tel Aviv branch. The problem again is that the Tel Aviv branch doesn't even have records from the Bethlehem branch for the years that they claimed to have searched. Finally, they claimed to have spoken to the Israeli police station in Bethlehem. But once again, Cooper and Griffin were exposed as liars, as there is no Israeli police station in Bethlehem.

But is there any evidence that Walid was involved in planting a bomb at the bank Leumi branch? Once again, if Cooper had simply read Eileen Fleming's interview with Kamal Younis, the relative who was trying to discredit Walid, even he admitted that after Walid, got out of prison, he and some friends "put packages behind a bank".

Beyond this, the Shoebat Foundation has found the UN records of the bombing:

Between December 24 and 27, there were two explosions in that area: “Bethlehem (in Manger Square near the Church of the Nativity)” and “Explosive charge went off outside the local Courthouse" 27 December 1977 JP. 2 Jan. 1978 Yediot Aharonot, 2 January 1978.

At this point, are we surprised that these records were ignored by CNN?

Finally, Griffin specifically asked Walid if he was receiving $13,000 for speaking at a Department of Homeland Security event. When Walid asked the reporter from whom he received this false figure, he responded by claiming it came from "reliable sources". Yet this figure just happens to be precisely the same bogus figure that the radical Saudi funded Islamist group CAIR claimed.

So, it's truth time. Will anyone at CNN look into this further? Are Anderson Cooper and Drew Griffin relying on a Saudi funded radical Islamist group for their bogus information and political assassination?

Anderson Cooper and reporter Drew Griffin are frauds, plain and simple. If the executives at CNN had a lick of pride or integrity left, they would fire both Cooper and Griffin out of sheer embarrassment.

CNN SMEAR CAMPAIGN — THE MISSING FACTS: What Anderson Cooper did not know - Shoebat.com