The Upper Room Discourse and the Rapture

Recently I have thought a great deal about the significance that the rapture was first revealed by Christ the night before His crucifixion in John 13—16, in a message often called "The Upper Room Discourse." Christ's farewell discourse is only found in John's Gospel. If Christ's "high priestly prayer" in John 17 is included, this section of John's Gospel (13—17) provides an introduction of church age truths, upon which the New Testament Epistles are built upon. Jesus' teachings the night before His death, provides an introduction to new truths that would form the core of the church age doctrine. The rapture of the church is one of the new truths included in Christ's last minute disclosure.

Lewis Sperry Chafer said, "The discourse embodies, in germ form, every essential of that system of doctrine which is distinctively Christian. Being addressed to Christians, it does not present truth which is peculiar to Israel, and being addressed to those who are saved, it does not present any feature of salvation by grace which is made possible through the death and resurrection of Christ, which truth is implied. This portion is like a seed plot in which all is found that is later developed in the epistles of the New Testament. It serves as Christ's farewell address to believers — those whom the Father has given Him out of the cosmos world." [1] Chafer then summarizes the content of the new truth revealed in Christ's final discourse as follows:

In this field of truth, Christ excelled all other prophets that ever have spoken. It cannot but stimulate awe and wonder when specific attention is given to the character and extent of Christ's predictive ministry. With reference to His own message He stated that the Holy Spirit would not only bring His words to the disciples' remembrance, but that He would show them things to come (John 14:26; 16:13). The foretelling ministry of Christ included the immediate future actions of individuals; His own death, resurrection, and ascension; the advent of the Spirit; the works of the Spirit in this age; the fact and character of the new age; the Church; the removal of the Church from the world; His second coming, preceded by the great tribulation; the presence of the abomination of desolation spoken of by Daniel the prophet; the judgments of Israel and her kingdom glory; the judgment of the nations and their destiny; and the future state of both the saved and the unsaved. [2]

It is significant to realize that Christ's reference to a coming in John 14:1–3, like all of the other new truth in this discourse, is newly revealed information concerning the church age, which is about to come into history. Thus, the revelation of the coming of Christ to take His own would also have to be a new revelation related to the church age. Indeed, that is what Christ introduces in John 14:1–3 for the first time. He introduces the rapture of the church for the first time, which means that it cannot simply be a reiteration of the second coming spoken of in the Old Testament (Dan. 7:13; Zech. 14:4) or in a previous discourse, like the Olivet Discourse of Matthew 24—25. This means that Christ's return in John 14 is a totally new event not previously revealed before, since the revelation of items in the Upper Room Discourse are entirely new things that relate to the church age.

As Jesus unveiled the new truth in His final teaching session to His clueless disciples, He said three times throughout His message that they cannot bear the full disclosure of His teachings now, so they will be given to them at a later time, after He sends the Holy Spirit.

The first reference occurs in John 14:16–17 where He says, "And I will ask the Father, and He will give you another Helper, that He may be with you forever; that is the Spirit of truth, whom the world cannot receive, because it does not behold Him or know Him, but you know Him because He abides with you, and will be in you." A second reference is found in John 14:26, which says, "But the Helper, the Holy Spirit, whom the Father will send in My name, He will teach you all things, and bring to your remembrance all that I said to you." The third time is found in John 16:7, 13–14, which says, "But I tell you the truth, it is to your advantage that I go away; for if I do not go away, the Helper shall not come to you; but if I go, I will send Him to you. . . . But when He, the Spirit of truth, comes, He will guide you into all the truth; for He will not speak on His own initiative, but whatever He hears, He will speak; and He will disclose to you what is to come. He shall glorify Me; for He shall take of Mine, and shall disclose it to you."

A specific example and illustration of the new things that Christ only introduced to them in the Upper Room Discourse but would later reveal more fully is the pre-trib rapture of the church introduced in John 14:1–3. A clear connection between John 14:1–3 and Paul's treatment of the rapture in 1 Thessalonians 4:13–18 has been demonstrated by a number of biblical scholars.

A significant number of commentators note that our Lord's statements in John 14:1-3 parallels another New Testament passage — 1 Thessalonians 4:13-18. [3] Renald Showers points out a number of similarities between the two passages. [4] However, it was the late Mennonite commentator, J. B. Smith, [5] who demonstrated just how extensive the relationship of these two passages really are. [6]

Dr. Smith made word-for-word comparisons between the rapture passage (1 Thess. 4:13-18) and a clear second advent text (Rev. 19:11-21) and found no significant parallels. "Hence it is impossible that one sentence or even one phrase can be alike in the two lists," observes Dr. Smith. "And finally not one word in the two lists is used in the same relation or connection." [7] He goes on to conclude as follows: "It would be difficult if not impossible to find elsewhere any two important passages of Scripture that are so diverse in the words employed and so opposite in their implications. . . . We believe the comparison of the words of these two passages . . . describe different events." [8]

When it comes to a comparison between John 14:1-3 and 1 Thessalonians 4:13-18 we see amazing parallels. That John 14:1-3 is a rapture reference is supported by the progression of words and thoughts when compared to Paul's more extensive rapture passage (1 Thess. 4:13-18). This is exactly what Christ said in the Upper Room Discourse, that He would introduce them to items the night before His death, when the Holy Spirit would come He would expand upon them more fully. Observe the following comparison: 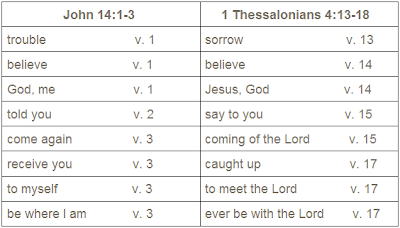 Dr. Smith notes the following observations as a result of these comparisons:

The words or phrases are almost an exact parallel. They follow one another in both passages in exactly the same order. Only the righteous are dealt with in each case. There is not a single irregularity in the progression of words from first to last. Either column takes the believer from the troubles of earth to the glories of heaven. [9]

In light of comparing Scripture with Scripture, it appears obvious that Jesus' teaching in John 14:1-3 and Paul's revelation in 1 Thessalonians 4:13-18 speak of the same event. Dr. Smith concludes, "It is but consistent to interpret each passage as dealing with the same event — the rapture of the church." [10] How else does one explain the progression of eight specific words/phrases in exactly the same order, in two different passages, by two different spokesmen? It is clear that these passages refer to a single future event — the rapture of the church. We learn that the church's blessed hope was first revealed by our Lord on the eve of His crucifixion to His disciples as they grieved over His departure. Later, the doctrine of the rapture was explained in greater detail via Paul's revelation to give comfort to the Thessalonians who were faced with a similar problem of departing loved ones that Jesus dealt with in the Upper Room with His disciples. Now, 2,000 years later and half-way around the world, today's church can be comforted by the hope that in the next moment of time we could be face-to-face with our Lord, in the Father's house, via the rapture of the church. May it occur today! Maranatha!