The headline in this June’s New York online magazine certainly grabbed my attention: “Jews for Jesus Trying to Seduce Dominique Strauss-Kahn?” If you haven’t heard, Mr. Strauss-Kahn was the head of the IMF, the international monetary fund and a likely candidate for Prime Minister of France — until he was accused of attempting to rape a maid at a posh Hotel in New York City. Now he sits under house arrest awaiting trial. 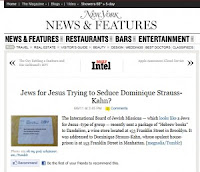 The story in New York magazine goes on to explain how someone from a ministry known as the International Board of Jewish Missions (not Jews for Jesus) attempted to send evangelistic literature to Mr. Strauss-Kahn, but he accidentally sent the literature to the wrong address. It ended up at a wine shop, hence the attempted evangelism went public and became fodder for the mistaken and provocative headline.

I suppose we can’t expect the secular media to applaud any efforts to share the gospel, let alone with scandal-laden public figures. I recall the disapprobation Brit Hume of Fox News faced when Tiger Woods, a Buddhist, was in the middle of his own sex scandal. Hume had declared that Woods could find the redemption and forgiveness he needed in Jesus Christ. Howls of derision from the secular press only increased my appreciation for Britt Hume’s honest outspokenness. In fact, I felt convicted that this had not been my first thought about Mr. Woods’ personal failings and trauma.

So even though Jews for Jesus wasn’t trying to “seduce” Dominique Strauss-Kahn by sending him evangelistic literature, I was glad someone thought to do it. The headline gave me occasion to pause and to pray for his salvation.

Lately it seems a plethora of these scandals has been rolling out into public awareness. Most recently we’ve been told the sordid details of Congressman Anthony Weiner’s twittering. How should followers of Jesus respond to people facing such public exposure and humiliation?

I find it far too easy to follow the lead of media moguls who seem to take self-righteous glee in watching people’s lives unravel. Yet it might just be that at these very moments, people finally realize their sin and their need for the Lord.

The good news of the gospel is that we all not only need grace and forgiveness, but we can find it in Jesus Christ. If the trajectory of someone’s life includes bumps that make them better able to recognize their need, then I say “Hallelujah!” — not for the sin itself, but for the opportunity to see and deal with it.

Let’s not behave like the Pharisees of Jesus’ day. They complained about the company Jesus kept; they didn’t like seeing Him with sinners, people for whom they had only contempt. Jesus replied to their criticism, “I have not come to call the righteous, but sinners, to repentance” (Luke 5:32).

Jesus denounced some of these same Pharisees for thinking they were already righteous and not in need of repentance. All of us need God’s grace and they were certainly no exception. All of us have enough sin in our lives to keep us continually repenting before the Lord. It is a sign of spiritual maturity to recognize our own sin more readily than we point to the sins of others, and to demonstrate grace and mercy towards others, even if they have yet to see their own need.

This is not to say that we ought to be blind to the sin around us or call it anything other than what it is. We don’t want to lose our moral compass; rather we long for people to come to repentance and experience God’s grace in Christ. Let’s find ways to tell them of God’s love in Y’shua.

I remember that when the Bernie Madoff scandal broke, I wanted to reach out to him. I asked one of our staff, Stan Telchin to send a personal letter to Mr. Madoff and a copy of his well-known testimony book, Betrayed. I don’t know if that book ever reached Bernie Madoff, but I believe the sentiment was right. When we see people caught up in scandals of their own making, we should resist the temptation to rejoice in their downfall, and should instead pray for their salvation.

Of course this is true, not only in the case of public figures, but for all people. Part of the Jews for Jesus story includes a time that Moishe Rosen relished the opportunity to criticize and make fun of the hippie movement while speaking to a group of InterVarsity students at Columbia University in the late 60s. Afterwards, a man named Bob Berk challenged Moishe, telling him that many of those hippies were Jewish and that instead of criticizing, he should try to tell them about Jesus. Moishe took that challenge to heart and, as they say, “the rest is history.”

A change of heart towards those we might otherwise condemn may not lead to a movement of people coming to Christ. Their hearts may not change, but ours will — and then, who knows what God will do? Whether it be Bernie Madoff, Dominique Strauss-Kahn or Anthony Weiner, these Jews need Jesus. Just like the rest of us.

Theology, Therapy, Twitter, and the Scandal of the Gospel - BPB (Albert Mohler)

To the Jew First: The New Testament and Anti-Semitism - Bible.org (Daniel B. Wallace)