The legal, social, moral, and political maps of America were redefined last Friday night as the New York State Senate voted 33-29 to legalize same-sex marriage in the state. The State Assembly had already approved the measure, leaving the Republican-controlled Senate the last battleground on the marriage issue. Shortly after the Senate approved the measure, New York Governor Andrew Cuomo signed the bill into law. It will take effect in July, thirty days after the Governor’s signature was affixed. 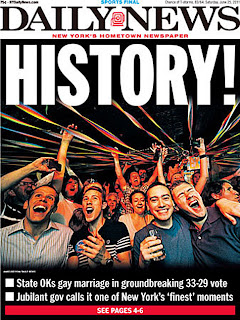 Add to this the fact that that California, the nation’s most populous state, is hanging in the balance as Proposition 8, the constitutional amendment passed by the state’s voters defining marriage as exclusively the union of a man and a woman, is now an issue before the Ninth U.S. Court of Appeals in San Francisco. It arrived at the appellate court after a federal judge in California ruled that Proposition 8 is unconstitutional. If California is added (again) to the states with legal same-sex marriage, more than a third of the nation’s citizens will live where same-sex marriage is the law of the land.

Furthermore, gay rights groups are counting on their New York victory to serve as a momentum-builder for similar efforts across the nation. At present, 29 states have constitutional amendments prohibiting same-sex marriage, while another twelve have laws against it. Marriage is expected to be soon on the ballot in Minnesota and North Carolina, where similar constitutional amendments are in development. On the other hand, same-sex marriage advocates intend to focus on the states of Maine and Maryland for renewed efforts toward legalization.

One crucial aspect of the New York development is the fact that same-sex marriage was legalized by legislation, and not by order of a court. Eventually, an unusual coalition led by the Governor Andrew Cuomo and major Republican donors pushed the measure through the Senate, even though Republicans had prevented even a vote on such a measure in recent years. As dusk set in in Albany on Friday, the fate of marriage appeared to rest on one Republican senator, whose crucial vote would determine the margin for or against the chamber taking the vote. In the end, the measure reached the floor, where it passed by a four-vote margin.

One of the lessons learned in this sad spectacle is the fact that enough Republican senators changed their positions on the issue under intense pressure, thus enabling the passage of the legislation. The same was true for the minority of Democratic senators who had previously voted against the measure. One of these, Carl Kruger, changed his vote because the nephew of the woman Kruger lives with was so outraged over the issue that he had cut the couple off from an ongoing relationship. “I don’t need this,” the Senator told a colleague, “It has gotten personal now.”

Well, of course it has. But what this statement really means is that many Americans, including many in the political class, simply fold their moral convictions when they conflict with the lifestyles or convictions of a friend or relative.

Thus far, whenever the people of a state have had their say, marriage has been defended as the union of a man and a woman. Same-sex marriage has been made legal by courts (such as in Iowa and Massachusetts) and by legislatures in some northeastern states. If current trends continue, the American map of marriage will reveal a deep and consequential division between states which recognize same-sex marriage and those who do not.

Given the central importance of marriage to our civilization and culture, it is hard to imagine how such a mixed moral landscape can last. Add to this the fact that President Obama has instructed his own Attorney General not to defend the Defense of Marriage Act in courts.

In the end, it is difficult to know how one can exaggerate the importance of the New York’s shift on marriage. New York is not merely a highly populous state — it also includes the nation’s most significant city in terms of economics, business, and cultural influence.