The price of gas has climbed more than a dollar per gallon since last year at this time, when it hovered around $2.80 for regular unleaded. The price at the pump has crept back up to what we saw in 2008, and the environmentalists are glad. The more costly the gas, the less people drive, and the less people drive, the less time they sit in traffic listening to Glen Beck. At least, high fuel costs push Americans to buy more fuel-efficient cars, according to Gallup. 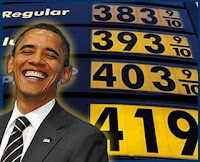 Most people, however, are not rejoicing about high gas prices. Most of us just want to drive to work without losing an arm and a leg. We want to buy food and still have money left for the electric bill. We want truckers to be able to ferry food and goods across the vast expanses of America without driving up the cost of everything they transport. The United States is a sizeable country, and all that long-distance transportation costs money which often gets passed to the consumer. Toyota may one day be good enough to develop a tractor-trailer-sized Prius, but, at the moment, trucks still require a lot of diesel.

Handling our energy supply problem requires two approaches. First, we need to be able to produce more of our own energy at home as efficiently as possible, and second, we need to be wise about the energy we use.

Producing the oil we need has had some hassles attached. For instance, getting permits to drill for oil can be a long, arduous process. President Obama announced May 14 that the United States would expand its drilling in Alaska, opening up the 23-million-acre National Petroleum Reserve west of the Arctic National Wildlife Refuge. The President's decision will boost our oil supply in the future; it's one solution to meet some long-term oil needs. Americans can't expect to see much change immediately, however. It will take a solid decade of exploration and getting permits and building infrastructure to pull out the oil from the reserve.

"Without a doubt, one of the biggest burdens over the last few months has been the price of gasoline.... While there are no quick fixes to the problem, there are a few steps we should take that make good sense," Obama said.

"First, we should make sure that no one is taking advantage of consumers at the pump," he said. "That's why we've launched a task force led by the Attorney General that has one job: rooting out cases of fraud or manipulation in the markets that might affect gas prices, including any illegal activity by traders and speculators."

There are other attempted steps being made. Last week the Senate Republicans failed to get a bill through that would have increased offshore oil and gas drilling. There are billions of barrels of oil buried beneath the ocean floor, but nobody wants a repeat of the Gulf oil spill last year.

At the same time, the Democrats tried to put through a plan to remove the tax incentives for the five biggest oil companies, effectively making them pay billions more in taxes. Despite the incentives, the price of oil is still near $4 per gallon and not promising to dip back down to $2.50 any time soon. The Democrats wanted to drop the incentives and put the increased tax revenue toward the deficit. However, the bill failed to get the needed procedural votes, and frankly would not drive down the price of oil at a time when transportation costs are killing our economy.

Senator Joe Manchin (D-WV) and other swing-voters have ideas to fix both the Republican and Democratic bills. For instance, Manchin would not remove the oil companies' incentives altogether. He'd give certain conditions under which the oil companies could keep their incentives, while passing on savings to the American people.

In the long term, the United States needs to take its oil use very seriously. The US has two percent of the world's oil reserves and yet, busy as it is, it uses 25 percent of the world's oil. Other countries are increasing their oil use, driving the price up. Developing energy efficient means of running our cars and heating our buildings and washing our clothes helps, of course. Creativity and innovation have always been hallmarks of American success. As we feel the pinch of necessity, we can certainly seek out our own sources of oil, as well as plug our cords into energy alternatives that offer us greater freedom from the wiles of OPEC and keep the costs of fuel and food from breaking our budgets.

"The debate we are going through is all about politics, creating somebody who is bad," says Sen. Tom Coburn, R-Okla. "We always look for the right political moment to make somebody look bad. The people who look bad are in the Congress because we don't have the guts to stand and say we need a cogent energy policy that says we are going to go after our own resources."