By Chris Schang
The Rapture Report

Over the last couple of days both U.S. President Barack Hussein Obama and Israel Prime Minister Benjamin Netanyahu have been at odds of Obama's recent speech declaring that Israel should withdraw to the "1967 lines" in order to help push the peace process forward. Netanyahu for his part responded with a resounding "No!" that has left the atmosphere between Washington and Jerusalem rather chilly.

Once again the liberals in the White house believe that if Israel makes "bold concessions" to the Palestinians that this will result in peace. This folly of an idea lacks any realistic chance of occurring as the Palestinians, now partnered at the hip with Hamas, have made it clear that they will never recognize Israel. The Palestinians continue to demand a "right of return" and the "dividing of Jerusalem" which is unacceptable to the Israelis. The Israel National News website reports more on Obama's demands in his recent speech:

US President Barack Obama dramatically changed US foreign policy - sandbagging Israel and aligning himself with PA chairman Mahmoud Abbas' preconditions for talks - when he called Thursday for a "full and phased withdraw of Israeli forces" from "occupied Palestinian lands" to what he termed "1967 borders" - the 1949 armistice lines Israel's former Foreign Minister and UN ambassador Abba Eban, in 1967, referred to as the "Auschwitz borders." Obama left room for some "land swaps" at those borders.

Saying the world was tired of "nothing but stalemate" in the Arab-Israeli conflict, and complaining that "settlement activity continues" while the "Palestinians have walked away from talks," Obama said Israelis cannot obtain the dream of a democratic and Jewish state through "occupation."

Obama called for "two states for two peoples" with permanent borders based on the "1967 lines with agreed upon swaps." The borders referred to as "1967 lines" are in fact the lines agreed upon in the 1949 armistice, following which Jordan occupied Judea and Samaria for 19 years. The armistice lines, considered indefensible by defense experts, are often called "Auschwitz borders" in Israel.

In reality the demands that Obama is making of Israel would lead to indefensible borders and eventual national suicide. Not once has the Obama administration or international community made any demands of the Palestinians to "recognize" Israel. All efforts so far have been to make Israel bend to the wishes of the Palestinian terrorists. This is completely insane and contrary to former U.S. foreign policy in regards to Israel. 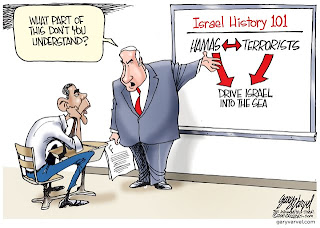 The total security of Israel is at stake and Obama acts like he doesn't have any common sense about what he is asking Israel to do. A question to ask is whether this is true or whether Obama knows exactly what he is doing and is doing it at the expense of Israel? If the latter is true, then the U.S. can expect serious ramifications from this pressure being placed on Israel.

The Israelis for their part have demanded that Obama take back his "1967 lines" approach and return to normal U.S. policy of previous administrations. The Israel National News article reports:

Prime Minister Binyamin Netanyahu was quick on the draw Thursday in voicing clear displeasure with President Barack Obama’s Mideast policy speech. “Israel appreciates President Obama’s commitment to peace,” the response began, curtly. “Israel believes that for peace to endure between Israelis and Palestinians, the viability of a Palestinian state cannot come at the expense of the viability of the one and only Jewish state.”

“That is why Prime Minister Netanyahu expects to hear a reaffirmation from President Obama of U.S. commitments made to Israel in 2004, which were overwhelmingly supported by both Houses of Congress.” “Among other things,” Netanyahu reminded Obama, “those commitments relate to Israel not having to withdraw to the 1967 lines which are both indefensible and which would leave major Israeli population centers in Judea and Samaria beyond those lines.” “Those commitments also ensure Israel’s well-being as a Jewish state by making clear that Palestinian refugees will settle in a future Palestinian state rather than in Israel.”

The Israelis also demanded that the Palestinians recognize Israel and forfeit any future claims against Israel. The demands also included the provision that a future Palestinian state remain "unarmed" and that an Israeli presence remain along the Jordan River to ensure that arms and other illegal items are not transferred into the newly created Palestinian state. So far the Palestinians have rejected such demands and there appears to be no end in sight to the conflict. Looking at the situation from a biblical standpoint, it appears the only way these things will be cleared up is by the fulfillment of Psalm 83 in which Israel destroys the "inner-ring" of enemies that sit on her borders and that have made the entire situation the way that it is.

The Palestinians having also brought Hamas into the fold has also made any deal with Israel even harder to reach as Israel refuses to negotiate with Hamas. Recently Fatah and Hamas signed reconciliation papers bringing the two sides together before the coming September call for a Palestinian state. The U.S. for its part said that it will not support any unilateral declarations for a Palestinian state and that the best recourse for dealing with the situation is through direct talks. What happens between now and then remains to be seen, especially as a second flotilla is scheduled to sail to Gaza to try once again to break the naval blockade of the Strip. This coming flotilla has the potential to ignite the region depending on what happens when it takes place. At this point, only time will tell.

Let us continue to pray that Netanyahu continues to stand firm against any calls for giving up more land and appeasing the Islamists. We know from the Gaza strip "experiment" that giving away land will only bring about a worse situation. Let us continue to pray for the peace of Jerusalem and for the Jewish people as they move closer and closer to trying times. and as always, as we see these things taking place, we know that the rapture of the church is getting closer with each passing day. Who knows, perhaps today?!!