A once-rare superbug has sneaked through hospitals in southern California in defiance of antibiotics, and in Great Britain, 59 surgery patients are at risk of having contracted an incurable human form of Mad Cow disease. As far as medical science has come in the past century, new infectious challenges can be found around each new bend, some of which are boosted along by the very science meant to wipe them out.

Between June and December 2010, 350 cases of carbapenem-resistant Klebsiella pneumoniae (CRKP) were reported in Los Angeles County. CRKP is an enterobacteria from the same family as E. Coli, and joins other superbugs, like MRSA, that are not discouraged by antibiotics. Antibiotics are helpful for getting rid of harmful bacteria, but their overuse has led to the survival and robust reproduction of the varieties of bacteria that are the most resistant to antibiotics. These killers spread throughout hospitals, primarily affecting the elderly and bedridden.

"This superbug is very dangerous. It tends to affect people that are in the hospital for long periods of time; people that have underlying medical problems; people who have been in nursing homes."

Healthy people with strong immune systems are at low risk to be infected, but they can transfer the bacteria to those with weakened constitutions. Health care workers are the most likely culprits in passing the infection along as they go from patient to patient. Once the infection is identified, patients can be isolated in private rooms, but treating the infection has proved a serious problem. A 2010 study by Columbia University Medical Center researchers showed that 42 percent of infected patients died within a month after infection.

The first cases of CRKP in the United States were seen in North Carolina in 1999, then in New York and New Jersey. Now, CRKP cases are popping up all over, although for now CRKP has remained confined to healthcare facilities. 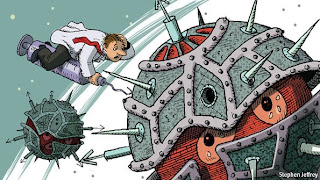 The British are facing their share of frightening diseases. Thirty-one deaths in Northern Ireland between June 2007 and August 2008 have been linked to the hospital superbug Clostridium difficile. C. difficile is a species of Gram-positive bacteria that can take over the intestines when good gut flora are killed off by antibiotics.

Fears of an outbreak of Creutzfeldt-Jakob disease have hit two hospitals, one in Essex and one in Wales, and 59 surgery patients have been informed they may have contracted the disease.

Creutzfeldt-Jakob disease (CJD) is a fatal degenerative brain disorder that causes holes to develop in the brain so that it becomes spongy in texture. Like Mad Cow disease in bovines, CJD is caused by misfolded proteins called prions. These confused proteins cause other correctly folded proteins to misfold, rapidly causing brain deterioration leading to memory loss and hallucinations, to speech impairment, ataxia, seizures, and death.

The concern over the disease began when a patient was discovered to be carrying the gene for the inheritable form of CJD. Those who had been operated on in the same operating room as the patient were considered at risk for contracting the disease, even though the surgical instruments had been properly washed.

Fertility drugs derived from human urine may hike the risk of Creutzfeldt-Jakob disease, according to research led by the University of British Columbia. Prions were detected in gonadotropins, which are used to stimulate a woman's ovaries to produce multiple eggs per cycle. The prions were not abnormal, but their very presence concerned researchers.

Our increase in medical knowledge has led to treatments for diseases that would have been deadly a century ago. Yet, even as we experiment and research to find more cures, new forms of diseases stick their cruel toes in our way. Thus far, science has failed to provide answers for all the world's suffering.

Ultimately, our Creator is the only One who can truly free us from sickness.

"Who forgiveth all thine iniquities; who healeth all thy diseases; Who redeemeth thy life from destruction; who crowneth thee with lovingkindness and tender mercies;" – (Psa 103:3-4).

Suffering is a part of this fallen world in which we live, but praise God, we are promised that one day, He Himself will wipe away all the tears from our eyes (Isa 25:8; Rev 7:17).

"And God shall wipe away all tears from their eyes; and there shall be no more death, neither sorrow, nor crying, neither shall there be any more pain: for the former things are passed away" (Rev 21:4).

The spread of superbugs: What can be done about the rising risk of antibiotic resistance? - The Economist

What does the Bible say about pandemic diseases/sicknesses? - GotQuestions.org