By Don Koenig
The Prophetic Years 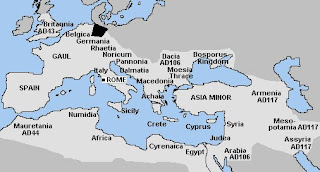 Here is a map that shows the extent of the Old Roman Empire. Where there are dates on this map those regions were not part of the Roman Empire at the time of Jesus.

What you should notice about the Old Roman Empire from this map is that it included North Africa, Jordan, Lebanon, Syria, Turkey, Iraq and nations SW of Russia and Western Europe. Most of Eastern nations of the EU were not in the old Roman Empire and that would include the Nordic countries and much of Great Britain.

As far out as it might sound, these Eastern European nations might again align with Russia because the tribe of Gomer that comes with Gog in the Ezekiel 38 war probably settled in parts of Eastern Europe. This map is one reason why many Bible prophecy teachers thought the Old Soviet Union was about to fulfill the Gog war in the 1980′s. The Western borders of the old Soviet Union are very near the Eastern borders of the Old Roman Empire. I think before the Gog war can happen there once again will be a realignment of nations allied to Russia. The Bible prophecy teachers had it right about who would come with Russia but God delayed the time-clock by a few decades by collapsing the Soviet Union.

The turmoil in the area of the Old Roman Empire is not going away anytime soon. Algeria looks like it will be next to go into civil war, Libya is now in civil war and that is not likely to change. There is turmoil in Tunisia and there will be further civil uprisings in Egypt between the secularists controlling the military and the Muslim brotherhood.

Syria is controlled by a 15 percent minority supported dictator named Bashar al-Assad. He has resorted to mass killings of Syrians that oppose him just like his evil father did. Bashar al-Assad has even resorted to bringing in the Iranian Revolutionary Guard to kill those in his own army that will not fire on the Syrian people. The situation in Syria is really going to get ugly and it would not surprise me if Bashar al-Assad would start a war with Israel as a diversion rather than lose control of Syria.

Turkey is heading for trouble with its Islamist and anti Israel political turn, and many of the nations in South Europe are now economic basket cases. Everyday more and more Germans, Austrians, French and others are turning to the Far Right for the solution. They have had it with the liberal elite and their failed social experiments. The Muslim immigrants are not assimilating, they are not productive citizens and they bite the hand that feeds them. Civil insurrections and even civil war between Muslim immigrants and native Europeans becomes inevitable.

European nations now enforcing the no fly zone in Libya will soon have boots on the ground in North Africa and this is all going to get out of hand and the US is not going to be in any position to bail Europe out. So Europe will increasingly polarize and militarize until civil war and foreign wars in Europe and North Africa become their worst nightmare. I think the rise of the Fourth Reich is already beginning in Austria and Germany in opposition to the multicultural idealist socialist elite that brought all this upon the European natives.

I guess Israel will handle Syria, Lebanon, Jordan and anyone else that gives them trouble. Greece and Turkey will once again go to war with each other. I think the end results of all this might very much look like this map. The whole region of the Old Roman Empire will be taken over by the Fourth Reich.

So it looks to me like this whole region is about to blow up. Probably the only thing holding things together is Germany and the US but the US is overextended and has its own dire economic problems and Germany is fed up with the PIIGS of Europe that continue to live beyond their means and expect others to clean out their pen. Therefore, I can see the Germanic people rising again with a Fourth Reich. (Will history record the fourth Reich as from 2014-2030)?

Will the Beast that comes out of this revived Roman Empire and that then goes worldwide have the same nature as Old Rome and also have some of the attributes of the more modern Nazi fascists that tried to put the Roman Empire back together again in the 1940′s? I would not be surprised. I expect that one extreme will be put down by another extreme like always. That is just the history of Europe and our fallen human nature. Then take Holy Spirit led Christians out of the equation in the Rapture and what do you think the Beast government will be like?

There will be at least four catalysts for the Fourth Reich Roman Empire revival that will become fit for a Beast The wars in North Africa will be one catalyst. The economic problems will be a second catalyst. The wars against Israel and a Sunni Shia war will be the third catalyst. And the Muslim uprisings in Europe and the backlash by the natives will be the fourth catalyst that will bring about the Far Right movement that will end with the authoritarian Beast of Revelation and his occult False prophet.

'Great Friday': Is Syria on the brink of revolution? - The Week Magazine