In the new modern, moderate, secular, democratic Egypt of the Arab Spring, Muslims in Qena are enraged and protesting because a Christian governor has been appointed for them. It was yet another indication that the Egypt that will emerge from this season of revolution and upheaval is much more likely to be an Islamic state than a secular democracy, no matter how much the mainstream media fantasizes about the latter. 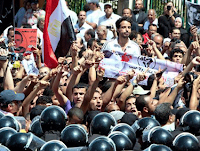 The protests have been vehement, if not violent. Reuters reported Sunday that “thousands rallied outside the governor’s office in Qena and prevented employees from entering, blocked highways leading to the town and sat on a railway line into the province demanding that the appointment of Emad Mikhail be reversed.” A local resident added:

“They started out by camping at the local government’s office. Then they set up a tent on the railroad tracks. They also tried to block the road and stopped buses to separate men and women passengers.” And “tensions were so high that the local Christian residents had to stay inside and couldn’t go to church to celebrate Palm Sunday.”

In the Qur’an, the equation is simple: obedience to Allah brings prosperity, and rebellion from Allah brings calamity. Islam teaches that Jews and Christians are considered to have rebelled from Allah by rejecting the prophethood of Muhammad and daring to tamper with their own Scriptures in order to remove prophecies of his coming and obscure their sacred texts’ congruence with the Qur’anic message. Accordingly, the Muslims, the “best of people” (Qur’an 3:110) must subjugate the “unbelievers among the People of the Book” – that is, the Jews and Christians who do not accept Muhammad – since they are “the most vile of created beings” (Qur’an 98:6). These vile beings must be made to feel the pain of their rejection of Allah in this life: this will simultaneously serve as an exhortation to them to relent and accept Islam, and a warning to Muslims to obey Allah, lest nothing similar befall them.

Thus historically, Muslims aware of the Qur’anic teaching on the People of the Book have reacted poorly when non-Muslims have been placed in authority over them. This happened even in the mythical proto-multicultural paradise of medieval Spain, al-Andalus. On December 30, 1066, about four thousand Jews in Granada were murdered by rioting Muslim mobs. The Muslims were enraged about the appointment over them of a Jewish vizier, Samuel ibn Naghrila, as well as about the political power of Samuel’s son Joseph. Ironically, contemporary hagiographers of Islamic Spain point to the appointment of Samuel as an example of Islamic tolerance, without bothering to mention the subsequent Muslim riots, which took place solely because Muslims resented that appointment as a violation of Islamic law.

The boodthirsty mob in Granada was incited to kill the Jews by a poem composed by the Muslim jurist Abu Ishaq:

“I myself arrived in Granada and saw that these Jews were meddling in its affairs. . . . So hasten to slaughter them as a good work whereby you will earn God’s favour, and offer them up in sacrifice, a well-fattened ram.”

Since the mob was killing dhimmis who were considered to be in breach of the contract of “protection” that mandated their subjugation to the Muslims, the attackers could claim that by the light of the Sharia the killings were lawful. And today, the stipulation that a non-Muslim must not have authority over a Muslim is still part of Islamic law. It has never been reformed or rejected by any school of Islamic jurisprudence. The Saudi Sheikh and legal expert Manaa K. al-Qubtan explained it in a 1993 fatwa:

“The command of a non-Muslim over a Muslim is not permitted based on the words of Allah:

‘and Allah will not open to the unbelievers against the believers a way [Qur’an 4:140].’”

The demonstrators in Egypt are aware of this law. A speaker told the demonstrators: “This won’t work. A Copt won’t implement Islamic law.” The local imam, Sheikh Qureishi Salama, said the demonstrations would end when the Christian governor was removed: “When there is a decision to change the governor to a civilian Muslim, we will end the strike and life will return to normal. Why is Qena becoming a testing ground for Christians? We aren’t guinea pigs.”

Indeed not. But the Christians in Qena have good reason to feel like sitting ducks.