For many years, I've heard people talk about the possibility of oil riches being discovered in Israel. Since the Jewish state was founded, there have been efforts to get Christians to invest in oil-drilling ventures. So far, no significant amount of oil has been extracted from Israel's soil.

Some Christians claim that prophecy suggests that oil wealth will come to the Jews. They point to a desire to steal Israel's oil wealth as what will trigger the Gog invasion. The prophecies in Ezekiel make no reference to oil being the reason for the attack.

Zion Oil & Gas Inc. operates in Israel, and has never produced any oil in its eleven-year history of drilling. It survives by constantly issuing new shares to Christians who believe that Israel is someday going to hit the mother lode of oil wealth. 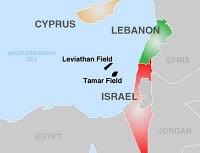 In the past year, the folks predicting an Israel rich in energy resources have had some positive news. Last summer, huge deposits of natural gas were found along Israel's northern coastline. The Leviathan and Tamar gas fields contain an estimated 127 trillion cubic feet of natural gas. The gas field is large enough to meet Israel’s own domestic needs for decades to come. Israeli Prime Minister Benjamin Netanyahu told CNN that his nation could forego building additional nuclear reactors based on its newfound gas reserves.

“It is only a matter of time before Israel becomes a big gas exporter,” said Philip Wolfe, an energy banker at UBS, the investment bank. Because natural gas has to be liquefied before it can be transported, it normally can't be moved over large distances. Oil is the key to any export wealth.

Israel is actually sitting on top of a vast amount of oil. According to Harold Vinegar, the former chief scientist of Royal Dutch Shell, the Shefla Basin holds the world’s second-largest shale deposits outside the United States, from which around 250 billion barrels of oil–about the same as Saudi Arabia’s proven reserves. The basin is located a few miles south a Tel Aviv.

We've known about oil shale for several decades. There is a huge amount of oil in shale. Estimates of global deposits range from 2.8 trillion to 3.3 trillion barrels of recoverable oil. The problem is getting the oil out of the sedimentary material. You can't just drill a well and pump out the oil. It's like trying to squeeze water out of a frozen sponge.

As our technology improves, we are able to extract oil from fields that were once beyond our reach. A few decades ago, we had no way of getting crude from the ocean. Now, we can drill in water that is several miles deep. The technology curb has now reached the point where shale is becoming an exploitable resource.

We currently use a fracking technique to remove gas from shale, and oil may be next. Oil-shale mining used to be a dirty business that used up tremendous amounts of water and energy. New technology will use heating units to separate the oil from the shale safely and at low cost. Israel Energy Initiatives estimates the marginal cost of production at between $35 and $40 per barrel.

There are some test projects in the planning stage and they face a number of significant issues:

The odds are long against shale oil, but Israel is probably the best to make it work. Unlike most deposits, the Shefla shale is in a hospitable location. It also contains oil of the light, sweet variety that is easy to refine into gasoline or other common end products. Most of all, the Jews have proven themselves to be very talented at exploiting resources. If they can't make shale oil work, I doubt any nation can.

An energy-rich Israel is certain to generate conflict with her Arab neighbors. The Leviathan gas fields straddle the Israeli-Lebanese maritime border, and Lebanon is already claiming that Israel is stealing gas from its territorial waters. I can easily see how this conflict could become an international crisis.

Egypt re consider contracts for exporting natural gas to Israel and Jordan - SteelGuru.com

IDT Corporation: Genie Energy Makes It Worth a Look - SeekingAlpha.com