UN Secretary-General Ban Ki-moon on Tuesday reiterated that the world body expects Israel to immediately surrender to internationally-backed Arab demands that it relinquish all claims to the Jews’ biblical heartland of Judea and Samaria and half of their ancient capital of Jerusalem.

The Jewish presence in the so-called “West Bank,” which includes the eastern half of Jerusalem, is “morally and politically unsustainable, and must end,” Ban insisted during a press conference in Uruguay.

Meanwhile, the Palestinians are moving forward plans to unilaterally declare an independent state with the support of the UN, outside the framework of a land-for-peace deal with Israel. 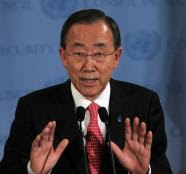 Palestinian leaders indicated that they will make such a move later this year. The motion is almost certain to be shot down in the UN Security Council, where the US exercises veto power, but will be widely adopted by the UN General Assembly, which most will see as more than adequate for “Palestine” to be declared a state.

Israeli officials are busy lobbying various nations against supporting this move. But diplomats fear their efforts are bearing little fruit, since Israel is not presenting any kind of alternative plan or process.

Many within Israel are urging Prime Minister Benjamin Netanyahu to stop playing the diplomatic game by the Arab world’s rules, and to instead begin insisting that the UN approach the peace process from the viewpoint that the West Bank and Jerusalem are disputed territories, where Jews have just as much, if not more, claim than local Palestinian Arabs.

But it is likely too late for that. And if it comes down to the UN General Assembly recognizing “Palestine,” Israel may be forced into desperate action.

An unnamed Israeli official told the Associated Press on Tuesday that if the Palestinians seek recognition of their sovereignty in the UN, Israel may annex the parts of the West Bank most populated by Jews - the much-maligned “settlement blocs.”

Israel already annexed the eastern half of Jerusalem decades ago, but that decision is all but ignored by the international community.