The imposition of Islamic law on the U.S. is the best solution for the country's economic woes, argued exiled British extremist Omar Bakri Mohammad in a WND interview.

Mohammad is the founder of controversial Muslim organizations. His followers are planning a protest in Washington today calling for American Muslims to "rise up" and impose Islamic law, or Shariah.

"You see, the problem of the economy of the West is that you have a bunch of capitalists who control all the resources and the remainder of the people are living in a very difficult position, some of them are below the lines of poverty," stated Mohammad, speaking from Lebanon, where he has been living since being booted from the U.K. in 2005.

"Islam is your solution, because we will bring the resources to the people," Mohammad continued. "Not to have the needs of the society controlled by some capitalist businessman, but rather the government must guarantee the needs of every individual – food, clothes, shelter, basic needs."

"And then anyone who wants more can work for himself," he added. "But right now the U.S. system is not even doing the basic things. And soon your country will be in more debt."

"We are offering you an alternative," he said.

Mohammad is the founder of Al Muhajiroun, a disbanded British extremist group that called for an Islamic state to be imposed in Europe and the U.S. The group was openly supportive of al-Qaida chief Osama bin Laden and his ideology.

Mohammad left the U.K. following the July 2005 London bombings when the country's Times newspaper reported that "a dozen members" of Al-Muhajiroun "have taken part in suicide bombings or have become close to Al-Qaeda and its support network." Shortly thereafter, Mohammad was told by the British government he could not return.

Al Muhajiroun previously maintained a branch in Queens, N.Y., which claimed it disbanded following the Sept. 11 attacks. Remnants of the U.S.-based group formed another extremist organization, calling itself the Islamic Thinkers Society.

The group is planning a protest today in front of the White House calling for an Islamic state to be imposed on the U.S. 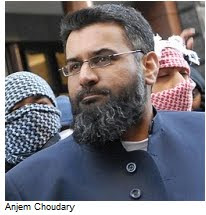 The protest is also being planned by Mohammad's former aide, Anjem Choudary, a British extremist who has said he will take part in today's demonstration. It was unclear whether Choudary will be granted entry into the U.S.

On Sunday, Choudary said in a radio interview President Obama must embrace Islam as a way of life or face the consequences of a trial under the Islamic court system.

Choudary claimed Obama was waging a war against Islam.

"[Obama] has promised all Muslims to be released from Guantanamo Bay. They are still languishing there even though he knows they are completely innocent," Choudary claimed.

"On top of that, he's increased the number of U.S. forces in Afghanistan, so he is a warmonger just as his predecessor was. And thirdly and more importantly," Choudary said, "the Muslims don't want democracy and freedom. Democracy and freedom are anathema to Islam and the Shariah."

Choudary said that at his protest, he will call on Obama and all Americans to "embrace Islam, not only as a religion but as a way of life."

"And at the same time, we will be issuing a warning that the presence of U.S. forces and U.S. personnel in Muslim countries, looking out for their interests, at the moment is very, very insecure. I think the Muslims are boiling angry around the world. This is something [Americans] should take very seriously."

Choudary turned his ire back to Obama, claiming the president was committing "crimes" against Muslims in Iraq and in Afghanistan.

"I do believe that the only way for him to save himself in this life and in the hereafter is to embrace Islam. Islam will eradicate all his sins; he will be like the day his mother gave birth to him. Otherwise, when we do implement the Shariah, obviously he will face the consequences of a trial under the Shariah court."

Choudary has publicly stated he believes the flag of Islam will fly over the White House. He repeated that contention in his radio interview.

"I do believe that as a Muslim every part of the world will be governed by the Shariah," he said. "So symbolically the flag of Islam will fly from every single country, every single nation."

Choudary says he expects thousands to come out to today's protest, which is also drawing counter protesters.

He currently presents himself as an Islamic lecturer and a leader of Britain's Shariah court. He is a founder and former chief of Al Muhajiroun.

After the group disbanded, Choudary then became a leader of Al Ghurabaa, which was reportedly a continuation of Al Muhajiroun. Al Ghurabaa was banned in 2006 by the U.K. for reportedly supporting terrorism.

Choudary in 2007 led a protest outside London's Central Mosque attended by WND. The protest called for the downfall of the British government for offering knighthood to novelist and essayist Salman Rushdie, who was accused by Muslims of defaming Islam and Muhammad in his 1988 book "The Satanic Verses."

Depictions of British flags were burned at Choudary's protest. Ralliers chanted, "Down with Britain, down with the Queen."

Groups Mobilize for and Against Upcoming Pro-Shariah Rally - FOX News

Sharia4America Muslims Call for UN to be Turned Into Massive Sharia Court! - Right Side News