The Prophetic One World Order Coming into Focus 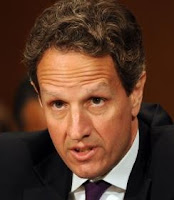 Wednesday, Reuters reported Treasury Secretary Timothy Geitner said he was open to what amounts to a global currency through the International Monetary Fund as suggested by China. Reuters quoted Geitner as saying,

"as I understand it, it's a proposal designed to increase the use of the IMF's Special Drawing Rights. I am actually quite open to that suggestion."

In the past, Geitner has rocked financial markets by hinting that he favors a worldwide currency replacing the dollar. In a congressional hearing on Tuesday, Minnesota Republican Michelle Bachmann asked Geitner if he categorically renounced the US moving toward a world currency as suggested by China. Geitner replied, "I would, yes."

To categorically renounce moving toward a currency plan by China, then a day later say that you are open to it, is the same as lying to Congress. Notwithstanding is the deeper issue - that this administration is continuing at an accelerated pace the previous Administration's dash to a one world order.

Another example is deference to the United Nations on foreign policy. Instead of providing moral and decisive leadership on Libya, the White House asked the UN to direct foreign policy. The White House has been particularly mum on the disaster in Japan, allowing international relief agencies to lead. The "stepping back" of American leadership in world situations is tantamount to transferring its power to the UN.

Meantime, there is little being done to stem the hemorrhage in the US economy, other than the White House, through Geitner, asking to raise more debt, further indemnifying the American taxpayer to China and other holders of US debt. And now, the cost of living, according to the Labor Department, is highest in American history.

Revelation prophesies the rise of a one world government under the Antichrist. Revelation 13:16, 17 says,

"And he causeth all, both small and great, rich and poor, free and bond, to receive a mark in their right hand, or on their foreheads: and that no man might buy or sell save that he had the mark, or the name of the beast, or the number of his name."

It starts with a one world currency.

Secretive Plan For a Global Currency - Center for Research on Globalization