US President Barack Obama, whose administration is red-faced over failing to predict the revolutions sweeping the Middle East, is now trying to paint the situation as positive for Israel.

The forces taking over in Egypt “should be naturally aligned with Israel,” Obama naively told a gathering of Democratic donors in Miami on Friday. “I’m actually confident that 10 years from now we’re going to be able to look back potentially and say this was the dawning of an entirely new and better era.” 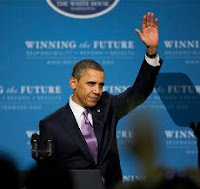 Obama continues to downplay comparisons with what is happening now in the Middle East and the Iranian pro-democracy revolution in 1979 that gave rise to the Islamic Republic. The White House has also all but ignored the return of Muslim Brotherhood spiritual leader Yusuf al-Qaradawi to Egypt after decades of exile.

But the Palestinians are paying attention, and have not shied away from acknowledging that the changes in the Middle East are actually more likely to reestablish a united Arab front against Israel.

In fact, that is precisely what Israel’s so-called “peace partners” are hoping for.

The Palestinian Authority newspaper Al-Hayat Al-Jadida revealed in an editorial last week that once the pro-democracy revolutions across the Middle East reach their conclusion, a newly empowered Arab nation will turn its hostile gaze on Israel.

“The symbol of the glory and dignity of the Arab masses is the conflict with Israel and its allies, following their escape from regimes which oppressed them, impoverished them, starved them, and which acted as a barrier between them and the stopping of the Zionist enterprise,” read the article.

Nor will America escape that wave of rage.

“The Palestinian people, with its long history of resistance, knows that the Arab nations will soon begin to chant their old slogans, including, ‘America is the head of the snake,’” the newspaper opined, adding that Obama apparently forgets “that the world is changing, and is no longer a hostage to American interests.”

While the White House slept: Once again, our government was caught off guard by the Middle East - NYDailyNews.com (John Bolton)