How Israel Could Revolutionize the Global Energy Sector

Libyan oil accounts for less than 2 percent of world oil production, yet the revolt against Muammar Qaddafi has managed to shoot up the price of oil to more than $100 per barrel in the last month.

No one knows how long the internal instability in the Middle East will last, but according to the US Department of Energy, its share of the world's total oil supply is expected to actually increase in the years ahead.

Simply, the world is using up the reserves of non- Middle East oil more quickly. Moreover, of the trillion barrels of proven reserves still left, according to the CIA roughly 800 billion barrels are to be found in the Middle East and North Africa, especially in Saudi Arabia, Iran and Iraq.

The implications for Israel of the West's growing dependence on Middle Eastern oil are troubling, for obvious reasons. Yet there are two new developments in our energy sector that could well offset these trends and eventually alter our standing in the world, especially with respect to Europe.

First, the gas discoveries in the Eastern Mediterranean, which began to produce commercial quantities of natural gas in 2004, are generally well-known. The Tamar field, which should begin production in 2013, is expected to supply all of Israel's domestic requirements for at least 20 years. The Economist suggested in November 2010 that the recently discovered Leviathan field, which has twice the gas of Tamar, could be completely devoted to exports.

After the Leviathan discovery these numbers could go up further. Perhaps for that reason, Greece has been talking to Israel about creating a transportation hub for distributing gas throughout Europe from the Eastern Mediterranean that will come from undersea pipelines.

What is less well-known, but even more dramatic, is the work being done on this country's oil shale. The British-based World Energy Council reported in November 2010 that Israel had oil shale from which it is possible to extract the equivalent of 4 billion barrels of oil. Yet these numbers are currently undergoing a major revision internationally.

A new assessment was released late last year by Dr. Yuval Bartov, chief geologist for Israel Energy Initiatives, at the yearly symposium of the prestigious Colorado School of Mines. He presented data that our oil shale reserves are actually the equivalent of 250 billion barrels (that compares with 260 billion barrels in the proven reserves of Saudi Arabia).

Independent oil industry analysts have been carefully looking at the shale, and have not refuted these findings. As a consequence of these new estimates, we may emerge as the third largest deposit of oil shale, after the US and China.

Oil shale mining used to be a dirty business that used up tremendous amounts of water and energy.

Yet new technologies, being developed for Israeli shale, seek to separate the oil from the shale rock 300 meters underground; these techniques actually produce water, rather than use it up.

The technology will be tested in a pilot project followed by a demonstration stage. It will be critical to demonstrate that the underground separation of oil from shale is environmentally sound before going to full-scale production. The present goal is to produce commercial quantities of shale oil by the end of the decade. 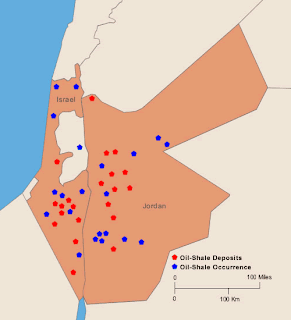 This particular project has global significance.

For if Israel develops a unique method for separating oil from shale deep underground, that has none of the negative ecological side-effects of earlier oil shale efforts, that technology can be made available to the whole world, changing the entire global oil market. The effect of the spread of this technology would be to shift the center of gravity of world oil away from Iran, Saudi Arabia and the Persian Gulf to more stable states that have no history of backing terrorism or radical Islamic causes. (In the Arab world, Jordan and Morocco have the most significant oil shale deposits.)

When will the West begin to treat Israel as a powerful energy giant and not as a weak client state that must be pressured? In the case of the Saudis, when the US realized the true extent of their oil reserves, after America's reserves in Texas and Oklahoma were depleted by World War II, it sought to upgrade its military and diplomatic ties with the Saudi kingdom even before its production capacity was fully exploited. The US-Saudi connection grew as massive infrastructure investments for moving Saudi oil to Western markets were made, like the Trans-Arabian Pipeline (TAPLINE).

In time, Saudi Arabia's status grew as its future position in world oil came to be appreciated.

In the case of Israel, updated international reports verifying the true dimensions of both its undersea gas and oil shale should be forthcoming in the next year.

Many more international companies are likely to take an interest in its energy sector at that time. Moreover, the full exploitation of these energy resources will require massive infrastructure investment for pipelines, liquefied natural gas plants and new oil exporting outlets in the Mediterranean and Red Sea.

Israel is uniquely situated by its geographical position and is able to direct its energy exports to either Europe or China and India. It may not have the capital to build this export capacity, but the involvement of foreign investors in these projects will give European and American banks new interests in developments.

Western policies will not change overnight. Nonetheless, Israel needs to tell the full story of its newly emerging role in the world energy sector if it wants to begin to alter the way it has been handled internationally.