Watchful Christians won't be shocked by the melding of religious thought that is currently underway. It is clearly prophesied in the New Testament and, after all, Bible believers have been watching the Scriptural predictions come to pass for some time. More than just a few of our allegedly Evangelical leaders have embraced, aligned with, or endorsed numerous unbiblical ideas and belief systems. Let's review just a couple of instances.

A recent development in the unsettling trend of dumbing down Evangelicals will take place this week. The National Association of Evangelicals is about to align with the Church of Jesus Christ of Latter-Day Saints. That's right, as if it could not have possibly gotten worse, the NAE, which used to stand for actually being "evangelical," are about to condone a "different Jesus" and then claim that Mormons and Christians all worship the same Savior. Though they will never admit it in so blatant of terms, their March, 2011, meeting in Salt Lake City signals that this is precisely the case.

This Thursday (March 10, 2011) the semi-annual board meeting of the NAE will be held in Park City and Salt Lake City, Utah. A February 22nd press release announcing the meeting quoted NAE President, Leith Anderson, as follows:

"We hope this time of dialogue with LDS leaders will deepen our understanding of the Mormon faith and contribute to the ongoing work of evangelicals in Utah," said Leith Anderson, NAE President. "For the sake of Christ and his kingdom, we seek to represent biblical evangelicalism to those who wouldn't hear or know. We also look for common ground on issues where we can work together."

At first glance, Anderson's statement sounds like he's inferring that, by going to Salt Lake City, the intent is to reach Mormons. Before you get too excited, though, consider the following. This impending NAE meeting is philosophically driven by a predilection identical to the 2007 paper produced by the Yale University Center for Faith and Culture called "A Common Word Between Us and You" and the subsequent 2008 conference titled, "Loving God and Neighbor in Word and Deed: Implications for Christians and Muslims." The premise of "A Common Word" was the erroneous notion that Christians and Muslims both worship the same God/god and the outcome of "Loving God and Neighbor" was that Evangelicals should extol the joys of Islam for a week each year and churches should invite Muslim clerics in to speak from the pulpit! These are classic examples of foolish Christians (or those who would call themselves "Christian"), predisposed to dangerous politically correct pluralism, and operating from a fallacious, even fictitious, assertion that anyone or any religion that mentions a "god" must be speaking of the same God.

Besides other high profile "Christian" leaders, signers of the ill-conceived Yale document included NAE President Leith Anderson and Fuller seminary president Richard Mouw. (For a list of signers and more on the Yale document and conference visit EricBarger.com.)

Concerning the event in Utah this week, I have ample cause to question how much "presenting biblical evangelism" will actually be accomplished by the NAE's meeting. Considering the makeup of the scheduled panel on Evangelicals and Mormons to be held during the meeting in Salt Lake City, I think I know.

These phony Evangelical leaders are intent on fishing around for commonalities while appearing to be clueless - or willfully ignorant - about the foundational abyss that separates Mormonism from true biblical faith. This is ecumenism run amuck and they've placed the tag of "Evangelical" on it! 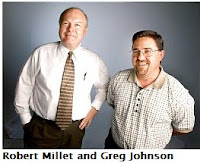 To be held before a reception at the Utah Governor's mansion, the March NAE panel will be moderated by Greg Johnson, president of Standing Together. Johnson is best known as the road show partner of Robert Millet, LDS Manager of Outreach and Interfaith Relations for Church Public Affairs and emeritus Dean of Religious Education at Brigham Young University. Together, Johnson (now an NAE board member) and Millet have traveled extensively endorsing the notion that LDS followers and Evangelical Christians are just one big happy family who worship the same god/God and who just need to be enlightened concerning each other. Panelists include Craig Blomberg, professor of the New Testament at Denver Seminary; Craig Hazen, professor of Comparative Religion at Biola University; Richard Mouw, president of Fuller Theological Seminary; and David Neff, editor-in-chief of Christianity Today - each of whom endorsed Millet's book, A Different Jesus?: The Christ of the Latter Day Saints, which is built around the idea that Mormons are actually Christians. If you've been watching Glenn Beck, then you've undoubtedly heard the same line.

The Salt Lake City agenda will be nothing more than a normalizing of Mormonism by the increasingly less evangelical NAE leadership. If we thought that Richard Mouw's November, 2004, apology (made from the pulpit of the SLC Mormon Temple) lamenting that Christians' ever referring to Mormonism as a "cult" was a setback for winning Mormons to the real Jesus, the NAE meeting this week is sure to further cripple the biblical efforts of faithful Christians living in Utah. In fact, I believe that, in the light of knowing who the panelists for the upcoming meetings are going to be, we need to carefully re-examine Leith Anderson's statement:

"For the sake of Christ and his kingdom, we seek to represent biblical evangelicalism to those who wouldn't hear or know. We also look for common ground on issues where we can work together."

He said "we seek to represent biblical evangeicalism." Who is the "we" in this statement? The NAE and the LDS Church! Could it be that what Anderson is signaling here is that the NAE is actually exploring some sort of joint evangelism consortium with the LDS Church? I could be mistaken, but it is no stretch to assume this could well be in the works, considering the well known pro-Mormon predispositions of the chosen panelists. It can be easily documented that Blomberg, Hazen, Mouw, Johnson, and the rest are going to Salt Lake City with the perception that both Mormons and Christians worship the same God and are referring to the same Jesus. That being the case, in their eyes it isn't Mormons who need "biblical evangelism," is it? Could the NAE's leadership be so spiritually deluded as to think that those Mormon kids who come knocking on your door are actually presenting the same Jesus who died on the cross for mankind's sins? (See "The Mormon Jesus vs. The Real Jesus") After reading statement after statement from the NAE panelists, one cannot escape the sad conclusion that this is indeed the situation. I don't see a person named to the panel who might offer a dissenting view. No one experienced in Mormonism, who views it as an aberrant, cultic religion, has been invited to participate. There'll be no one like Ed Decker or Jim Spencer there to argue that Mormonism is a cult whose participants desperately need true evangelism. These men are both former Mormon elders and are without question two of the greatest living Christian authorities on Mormonism. (Both also serve as advisors to our ministry.) The NAE leadership obviously doesn't want any real debate. Instead, they have stacked the panel, so unless there is a genuine intervention by God, the conclusion of the panel's work is already decided.

Instead of recognizing Mormonism as a non-Christian false religion, Johnson and crew will only point up the various issues that Christians and Mormons may find in common - while ignoring the crucial evidence that the LDS Jesus is NOT the biblical version and many other issues that forever sequester real Christians from accepting Mormonism. Before anyone thinks I am being too hard here, please remember that the right and genuinely loving thing to do is to warn those engaged in a false religious system. What counts is never what we might have in common with another religion. It's what we can NEVER have in common that causes biblical Christians to reject joining with them (II Cor. 6:14-7:1).

I can only imagine the exuberance among Mormons as the NAE meeting approaches. In reality, this is exactly what Robert Millet and the LDS leadership have long wanted - to be accepted as "Christian" - even though the Mormon Church has always and continues to worship a "different Jesus," embraces a "different gospel," and is led by a "different spirit" (II Cor. 11:3-4). Though they may not hold some sort of coming-out party or a joint news conference announcing that all serious theological differences have been waived, when a panel is compiled of squishy elites who have already given approval to Mormonism, then there is little left to do but begin the work of convincing Christians that those narrow-minded, nasty apologists (like me!) have just been leading us all astray and have been oh so mistaken about our new "brothers in the Lord" from Salt Lake City.

No matter how convoluted the NAE may have it, Mormons (and Muslims) do not worship our God and are lost in false, worthless belief systems. I only wish I could accept the millions of Mormons who live among us as authentic and biblical in their beliefs. However, if I'm to be true to the Scriptures, I cannot. I also wish I had nicer things to say about the NAE. For years I have spoken and written about the encroachment of spiritual liberalism and Emergent thought inside Evangelical circles and have also been a long time board member of perhaps the best known and one of the most effective counter-Mormon ministry, "Saints Alive in Jesus," as well. I understand both the doctrines and practices of Mormonism and the failings of modern Evangelicals to adhere to sound biblical beliefs. Mormonism is still a cult, no matter who endorses them, and the NAE have ceased to be "evangelical" and no longer speak for me. I realize it sounds coarse, but since the NAE continues to forsake the Bible and betray those of us who actually believe the Scriptures, they should be renamed "The National Association of Ecumenicals." I suggest that, if you believe likewise, it would be appropriate to alert others to consider avoiding them.

Do Christians and Muslims worship the same God? - GotQuestions.org

The Mormon Jesus vs. The Real Jesus